Got the traffic animated! This is a test using procedural keyframing with hermite curve interpolation. I’ve never tried this before, but it seems to be nice and fast. Good to get the city populated, although it still looks like some slick future techno city which wasn’t the original plan… No collision yet, and they are all driving in the middle of the road 🙂 I forgot to link to the code earlier…

I’ve added some placeholder building models, and a bit of traffic. No animation, just getting the logic right – follow the roads and don’t double back. 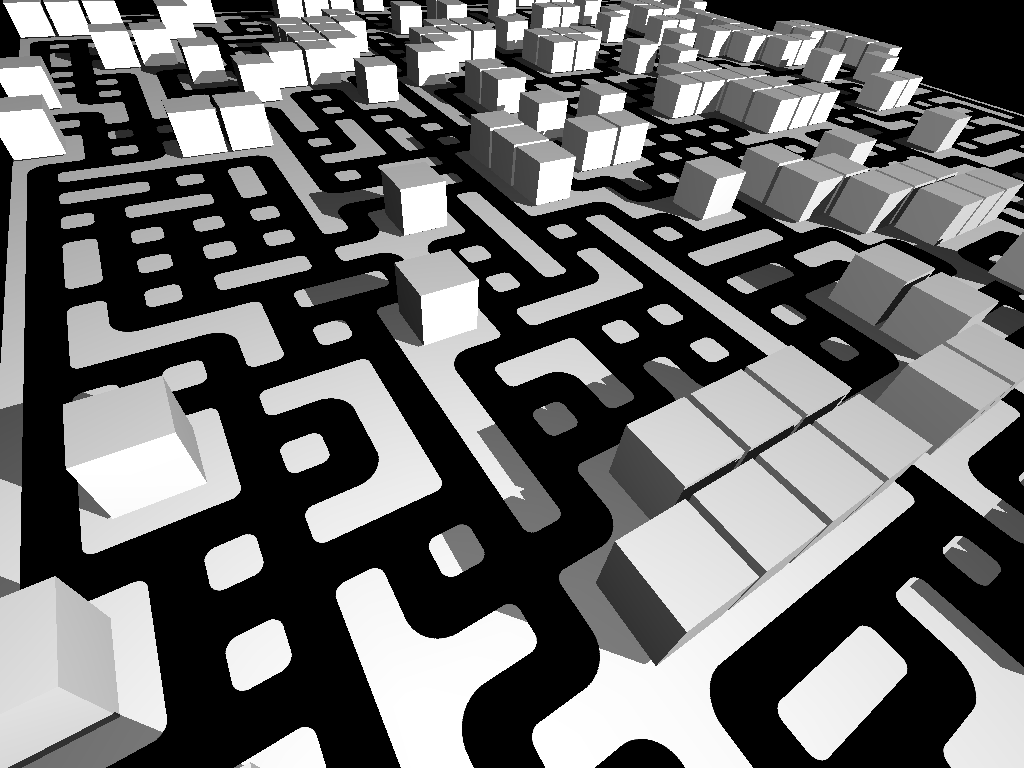 Also known as a Dolly zoom and all sorts of other names, an effect where you simultaneously zoom and move the camera which shrinks or enlarges the background and foreground while leaving the subject more or less the same. A camera trick in fluxus:

I’m trying to allocate a chunk of time in the week to work on free software, rather than squeezing it into evenings and weekends as I used to have to do. Yesterday I got fluxus working in a hopefully easier way for packaging, and started working on tiled rendering support (so we can make gargantuan sized renders limited only by memory). This isn’t quite working yet, but resulted in a nice accidental art gallery:

Noting an absence in the Lirec research about games (maybe I’ve missed it – there is a lot to read) I’ve started collecting together games which attempt to nurture a bond between the player and another character. My first thought was Ico, but I also remembered the Chau in Sonic Adventure, which migrate from the DreamCast to the VMUs and back again – covering one of Lirec’s core themes.

Java’s quite good (I’ve never looked at it before). All the things I like about C++ with a class system like PLT Scheme. It won’t stop me Scheming, but it might mean I write less C++ in future. I’ve been playing with this game engine quite a bit too.

I’ll get back to posting more pictures and less words soon, I can’t have this turning into a proper blog…

Thanks to the ever helpful Matthew Flatt, I can now catch scheme errors before they cause an exception and stop everything running. It’s also possible to detect that an error has occurred and do something else (play a suitable sample, electrify the keyboard…)

The first performance attempt of a livecoding system is always stressful, but scheme bricks at make art was especially so for me – using the trackpoint on my thinkpad hurt my finger, there was too much typing and it generally felt really really hard (I ended up switching to betablocker). In order to help combat this I’ve taken the following measures:

The last point is key really, and I’m having quite a bit of fun with it now, so all going well, I’ll be giving it another go next week. 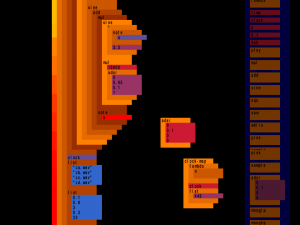 In order to get more context for potential artistic directions for the lirec project, I’ve started compiling a timeline of robots in art – I haven’t even got as far as electricity yet… The Digesting Duck of Vaucanson