I was invited to go and talk about stuff at the SGI yesterday. Fellow presenters were Lakshmi Sastry from the Rutherford Appleton Laboratory, talking about Big Science and visualisation, and how they are interested in using their parallel processing work with arts and humanities projects. Mark Jones from Advanced Simtech showed us through a simulation of a road traffic accident which was used as evidence to bring a conviction in court. Alex Jevremovic gave some live demos of the detailed architectural modelling he’s been doing around Coventry, including a planned reconstruction of it’s famous cathedral. Soulla Stylianou from Daden Limited gave a talk on all the second life work that they are doing, visualising things like air traffic and astronomy. The talks were also shown in second life too, and you could see your talk being projected “virtually” next to your own projection, which was a little surreal. I also found out about OpenLifeGrid which is a kind of open source second life, I think – which might be a little more interesting than the original. 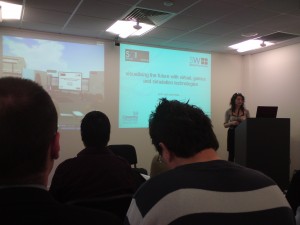 Sara de Freitas from the SGI introducing the event.