I’ve been developing a simple networked mulitplayer prototype game for groworld. Not much to look at yet, but it contains one very simple gameplay mechanic – pollen can be blown out or absorbed into flowers by players, who are represented by plants. At the moment this just results in a change of flower colour, but the idea is that we could use a technique like this to distribute more complex abilities and behaviours between players. It’s also a good way of testing out network transport protocols, at the moment it’s just a couple of OSC messages, but the next thing to try is XMPP (which means a jabber chat client for fluxus 🙂 All the code is available on foam’s git repo. 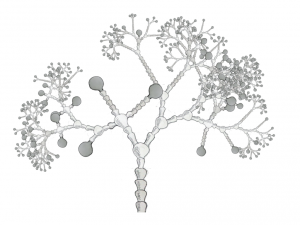