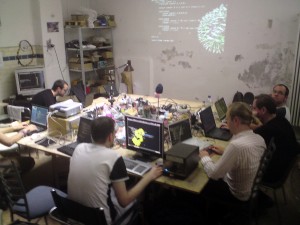 I spent last weekend in Berlin, on Saturday we has a fluxus workshop at pickled feet where I introduced livecoding and fluxus, and then had a quick play with the groworld game prototypes.

On Sunday I tried some audience participation livecoding. I think it went quite well, people were playing al jazari quite happily from the moment I got it set up, so I never really got the chance to explain anything – but it didn’t seem to matter too much. I just joined in with them, first doing some classic fluxus livecoding using the sounds they generated, then accompanying them with scheme bricks and finally al jazari myself, where I messed around with the bpm a bit too much and broke everything (slightly on purpose…)

I’d like to explore this form of audience inclusive performance more, I think it could work better if I was more in an audience role myself and not a separate entity – there is a bit of a performer/audience barrier to overcome.