For no particular reason, I thought I’d have a go at writing a raytracer 100% in scheme (it actually started as a port of this which I wrote ages ago). I run it in the mzscheme interpreter for development and then compile it using stalin to render stuff. I’m hoping maybe it can serve as a framework for playing with some more esoteric rendering ideas in the future. 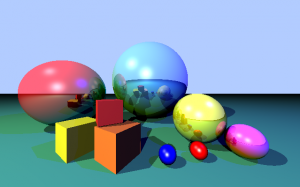 The code is here and while it’s not good enough for any general use yet, it supports all the usual raytracing stuff, plus obj file import and is partly integrated with this voxels renderer.

Hapstar is the new name for my little bioinformatics project, visualising population structure from differences between genetic sequences. The last few days I’ve done a lot of work on the GUI, allowing you to drag nodes around by hand, zoom in and out and navigate the graph. Also quite a bit of graph theory, validating the input graphs by detecting if they are a single connected component – or contain isolated graphs. It’s already been used to produce figures for an upcoming publication, so hopefully I can show some real examples soon. 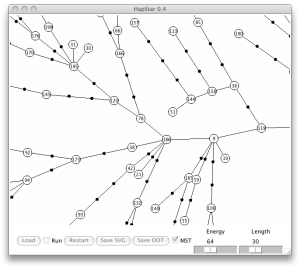