As I’ve been researching the ideas of Jane McGonigal lately, I was interested to find out the real history of the Monopoly board game from Dmytri Kleiner at the weekend. From wikipedia, thanks to the research of Ralph Anspach:

In 1903, the Georgist Lizzie Magie applied for a patent on a game called The Landlord’s Game with the object of showing that rents enriched property owners and impoverished tenants. She knew that some people would find it hard to understand the logic behind the idea, and she thought that if the rent problem and the Georgist solution to it were put into the concrete form of a game, it might be easier to demonstrate. She was granted the patent for the game in January 1904. The Landlord’s Game became one of the first board games to use a “continuous path,” without clearly defined start and end spaces on its board. A copy of Magie’s game, dating from 1903Ã¢â‚¬â€œ1904, was discovered for the PBS series History Detectives. This copy featured property groups, organized by letters, later a major feature of Monopoly as published by Parker Brothers.

While the official history on the Hasbro monopoly website picks up the story a little bit later on, and leaves off all details of its original, critical nature:

It was 1934, the height of the Great Depression, when Charles B. Darrow of Germantown, Pennsylvania, showed what he called the MONOPOLY game to the executives at Parker Brothers. Can you believe it, they rejected the game due to “52 design errors”! But Mr. Darrow wasn’t daunted. Like many other Americans, he was unemployed at the time, and the game’s exciting promise of fame and fortune inspired him to produce the game on his own. 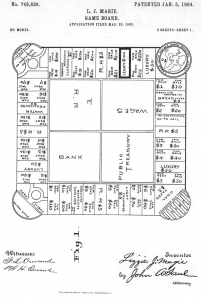