Firstly, the multiplayer garden prototype has been running for ages now and has collected a fair few plants across quite a wide area – thanks to all of you testers! This is one section of the world: 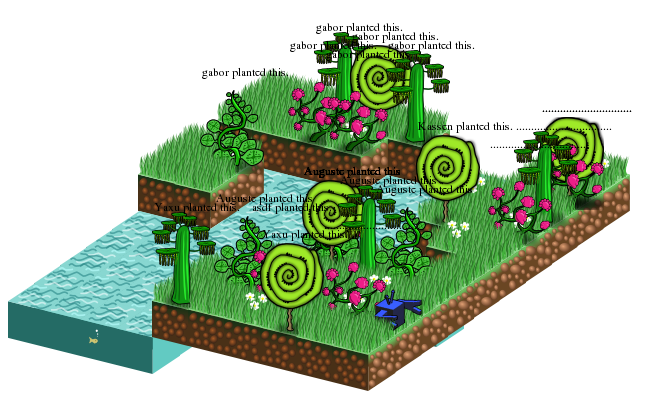 I’ve also been building the integration between the Lirec AgentMind code and an online representation to start work on the companion AI characters. This needs to allow multiple (perhaps many) people to interact with the agents. The AgentMind (which is based on FAtiMA) is written in Java, the agents are run in separate processes that receive messages which represent perception of their world. Objects or agents arriving or leaving, and changes in parameters are sent to each agent, while in turn, agents notify the world of changes in their state (mood and other emotions) or speech events.

The world my agents are connected to is written in Clojure (as I’m more familiar with parenthetical languages than Java these days) and distributes the messages and keeps track of the world state. I’m using the Compojure web server to link the world with the client application running in the browser, which allows people to modify the world and see the results of changes. 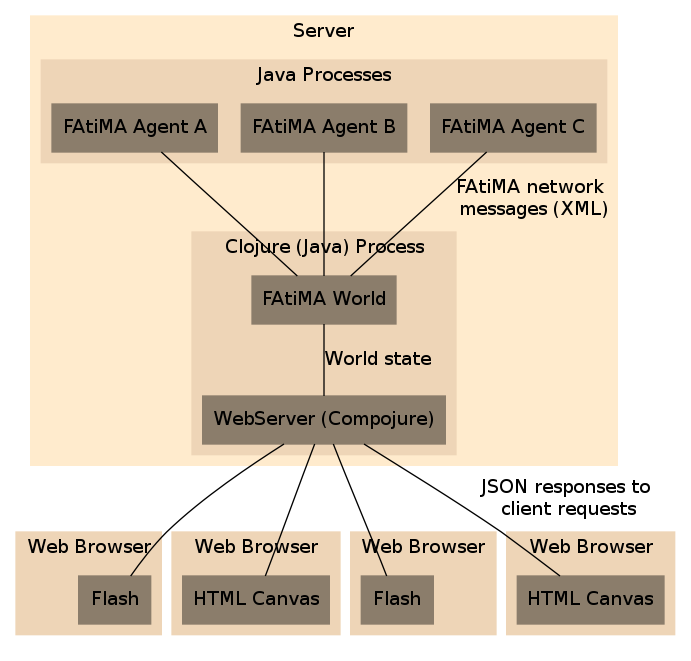 I have 3 test agents built, based on our ideas for representing each of the 6 “layers” of permaculture as characters. They set up to respond to things that you can create in the world. This is probably the simplest prototype possible, and I’ve obviously spent a huge amount of time working on the complex mood representation, but it works: 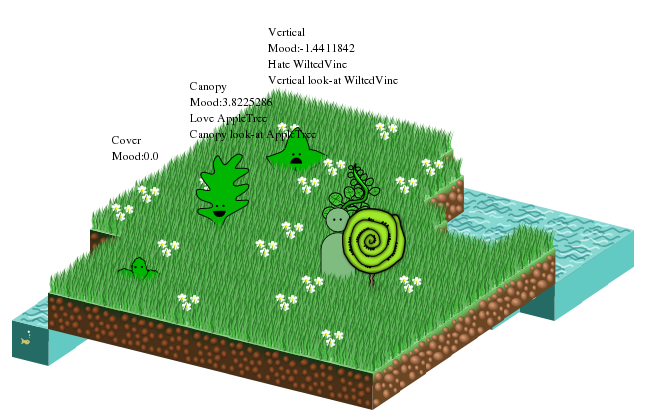 Next is working with Lina Kusaite on some concept artwork she’s been working on, and at the same time learn more about the AI system – which should both help to make the ideas for the characters and the game in general much more concrete.

I’m talking at Hub Helsinki on Tuesday (14th September), probably covering FoAM, groworld and perhaps a little bit of livecoding and Naked on Pluto. The official event description is here.

It’s one of their breakfast meetings, so starts at 8.30 – which I quite like as it keeps the rest of the day free. The Hub is an idea that has spread to many cities throughout the world, and Helsinki has one of the more recent places to get one. The general idea is to provide a shared space for working in, and encourage people from different backgrounds to mix.

Another re-blog from Naked on Pluto.

Our last day of intense work! This consisted of mopping up the details and joining the sections we’d finished from the previous days. It’s still hard to know how it will feel to play, and there will be much tweaking – but at least we have a lot of situations and game play which thread together into a complete path from the start to the end of the game.

Being careful to not give too much away, one of the things I’m looking forward to is a gradual opening up of the game as you progress. It moves from quite a fixed path, and opens up into problems with less rigidly defined solutions. The playtesting will be essential to get a real idea of how well it actually works, and allow us to fine tune/radically change sections.