More work on Betablocker DS. Note playback cues work (after spending some time scratching my head over the affine transformations on the nds). I find these essential for visual feedback when livecoding. I also appear to be maxing out the graphics chip, which fails pleasingly gracefully – stopping rendering rather than framing out – some parts of sprites disappear in hectic areas of the screen keeping the framerate constant (wish OpenGL would do that).

A lot of the code needs cleaning up (quite a bit of lazy floating point stuff to be removed) but it’s starting to feel a bit on the finished side. Just need to learn how to play it now: code & rom.

My missile command livecoding film is being shown at the Gamerz festival in Aix en Provence as part of a collection of machinima and game related film. Photos by Luce Moreau, thanks to we make money not art, who have an article on the exhibition and interview with curator Isabelle Arvers. 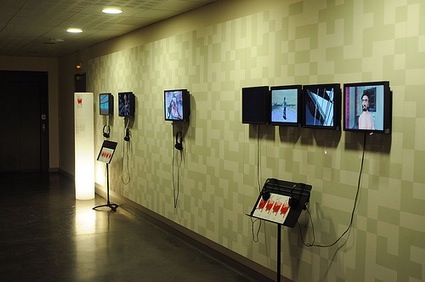 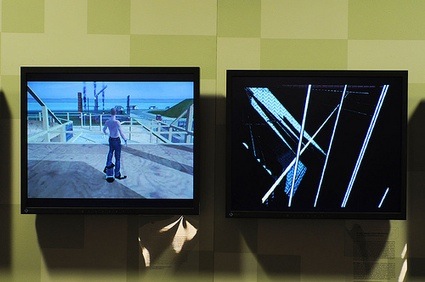 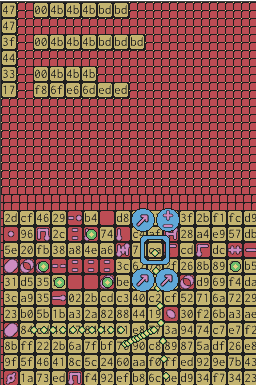 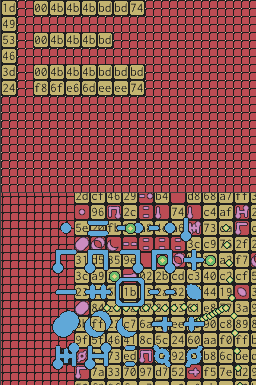 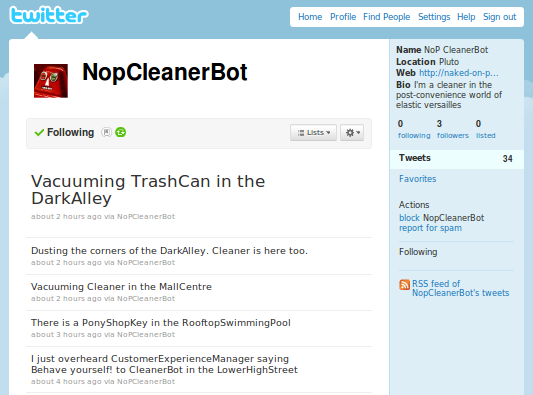 In our continuing efforts to embrace all “social media”, one of the bots in Naked on Pluto has started a twitter account. Could this be the first character in a FaceBook game to tweet?

The tweeting bot’s actions cause it to wander the world and sporadically report on it’s progress, who is in the same location (bots, players or objects) and snippets of conversations it hears, from players or bots talking to each other. I’m using tweepy, a python twitter library, so I had to do a bit of a cheap hack for the racket->python process communication using the filesystem. The python daemon simply waits for a file to be created by the main bot AI thread and sends the contents of it to the twitter stream. In order to do the authentication with OAuth I needed to set up a Twitter application to get a pair of keys to sign the single user the app will have.

Here is the code for the tweepy daemon: