Part of our groworld bazaar at Pixelache 2011 was the “draw your own plant spirits” workshop/gallery installation in the Augusta gallery on Suomenlinna island. This was the first event to use the Germination X game in a public setting, and the idea was to get people to help us design characters to represent the layers, or groups of plant types that permaculture companion planting uses.

This started with a drawing challenge, to draw on paper your idea of what a “spirit” would look like for trees, leafy ground cover plants or shrubs. The drawing was then instantly scanned and automatically put into the game, connected with the FAtiMA AI system and animated. The game with it’s new characters being projected on the wall at all times. 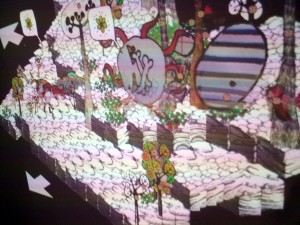 We wanted to ask more questions about how emotions could be expressed by the characters in different ways – along with how the fundamentals of permaculture could be described by the game itself in a social network setting. In the gallery format this proved difficult – as people had more than enough to think about being put on the spot and asked to draw something!

The thing that impressed me most was the range of the styles and ideas resulting from this simple request. Despite being able to see the characters drawn by other people around them on bits of paper, and in the game, each one was quite unique – giving us a lot to think about. 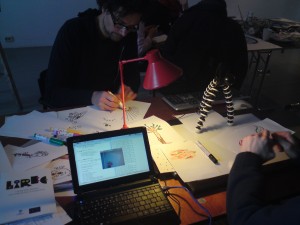 2 thoughts on “Germination X: Draw your own plant spirits”