Once you have a system for running unauthorised code, you can test it with some well used homebrew – I used uLaunchElf for this purpose. Using swapmagic you need to put the executable on your usb stick called SWAPMAGIC/SWAPMAGIC.ELF and it should boot automatically. Not all usb sticks work, I had to try a few before I found a suitable one.

The next task is installing the toolchain of compilers and related utilities for making your own executables. At this point I found that the ps2dev site was offline along with it’s svn repo, but I managed to find a backup here, which I am now mirroring here. When you have the svn repo recreated, follow the instructions in ps2dev/trunk/ps2toolchain/readme.txt to build and install, you just need to set up some paths to tell it where to install (I use ~/opt) and run a script. The script tries to update from the unresponsive official svn, so I also had to change ps2toolchain/scripts/005-ps2sdk.sh to get it to complete.

You get a load of sample code in ps2dev/ps2sdk/samples, all you need to do is run make to build them. Just as with the Nintendo DS and Android devices, the compiler is gcc – or rather “ee-gcc”. “ee” stands for the Emotion Engine, Sony’s name for the main MIPS processor.

The result of the make command in the exciting screenshot above is a file called “cube.elf”. ELF stands for Executable and Linkable Format, a unix standard (debugging variants used to be called DWARFs “Debugging With Attributed Record Formats”, I make no comment).

Copy this to your USB stick and you should see something like this: 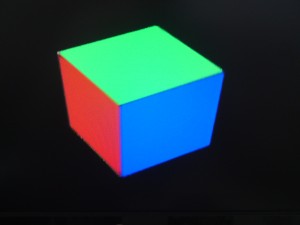 Yesterday I had the chance to take part in Julian Oliver’s and Damian Stewart’s Artvertiser walk around Helsinki. Advertising space was augmented with new artworks made by the workshop participants and displayed by their custom built camera goggles. It was also a chance to chat with the group behind m-cult, who were supporting the workshop. I found it significant that many of the locations chosen came with their own musical augmentation too – a deliberate choice, I’m sure. 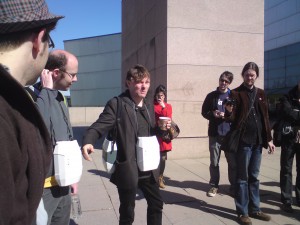 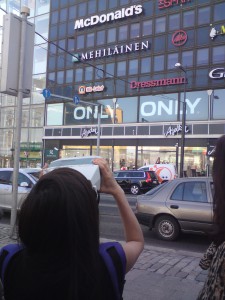 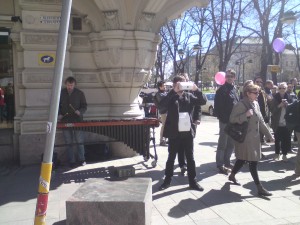 Reuse is the better form of recycling, and the machines that we all increasingly use are fabulous concoctions of various plastics, metals and ceramic compounds. It’s simply shortsighted to treat them as throwaway items. With this in mind, and lacking a computer I can use at gigs with a GPU for a while now, I thought I’d postpone the inevitable cost by doing a little obsolete tech archeology.

I think homebrew and it’s associated arts – as a creative subversion (rather than a route to piracy) is increasingly relevant, so I’m going to try and log my notes here. The information out there can be a bit challenging to understand, but I’d also like to show that it’s not that much of a dark art (compared to official development of, for example android which I’ve been exploring lately). I must admit an advantage with PS2, as some time ago I was doing this “the proper way” for things like this, so perhaps some useful information can leak out of long dead NDA’s too. 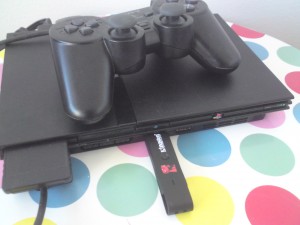 The first problem to overcome with homebrew is how to get the machine to run code it’s not supposed to run. You need special hardware to burn PS2 bootable disks, and the hardcore approach to getting around that is known as the swap trick. You block the various sensors that detect if a disk is present, make a copy of a game on a CDR, replacing the code with your own. Boot using the original, then find a place in the game where the software isn’t paying attention and carefully switch it with the CDR. Once you can run “unofficial code”, you can make use of one of the various discovered exploits to (for example) make a bootable memory card to launch your own software from then on. A simpler approach is to give your memory card to someone who has already done this and get them to do it for you.

I didn’t know anyone who had done this, and I am also not that hardcore, so I spent a little bit of cash on a bootable CD designed for this purpose (which is legal to produce, because of homebrew). Along with the CD you get a variety of small shaped pieces of plastic for circumventing the drive opening detectors. These are only really needed for piracy though AFAICT, as you can boot into homebrew on a normal USB stick, so I haven’t needed to bother with them.

This week I was kindly invited by media artist/game designer and inflatable installation maker Andy Best to help evaluate students on the Digital Arts course at Turku University of Applied Sciences. There was a lot of good work to comment on, much of it involving games or post production/animation. Some of the work is online, for example Saana Vartamaa’s game catmeleon experiments with a game based approach to teaching colour theory and Julius MurtojÃƒÂ¤rvi’s NostalgiaplÃƒÂ¤jÃƒÂ¤ys, a reconstruction of the buildings in the main square in Turku.

I made a possible candidate for the TOPLAP dvd project – I took some time to get the audio visual sync working properly, which makes it (possibly) a little clearer what’s going on.