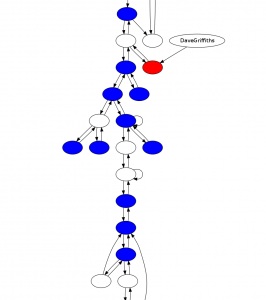 Naked on Pluto is a text adventure game, it’s world is comprised of descriptions, populated by bits and pieces of text from your facebook profile while the space is largely left to your interpretation and imagination. There are some ways of visualising it though.

We have been archiving versions of the game world every hour for the last year in a git repo. In these files the only facebook profile information we have stored are names, which are considered public information in the agreement with facebook. We are interested in using this data to see how we built the game and potentially how people have been playing it (although one snapshot per hour isn’t really enough for that).

I started out experimenting with GraphViz and Gephi but I ended up switching to fluxus and adapting the exquisite code visualiser to read through thousands of dot files to make a dynamically changing graph. This animation shows the process from us building the world to the introduction of the first playtesters over the course of a few months: