Over the last week I’ve been designing and implementing a lot more game mechanics for Germination X which are needed for an upcoming visit to the Mobile Life Lab in Stockholm. The more interesting ones involve some direct player – player interaction. The thing I’m trying to balance is keeping the central design simple (what you have to do), but adding just enough for it to be taken further by players (how you do it). One important part of this is emphasising cooperation without making it mandatory – something I think is a mistake to do, and leaving the way that people interact online as open to interpretation as possible. Tale of Tale’s Endless Forest is a good reference point here. 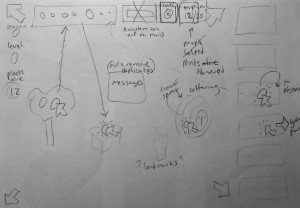 The focus is adding a kind of “levelup” system for players to progress through the game in a longer term way than currently, along with some surprises. Also adding a way for players to send fruit they pick to other players as gifts, or to the plant spirits as a kind of “offering”.

The other major change is updating the game to use MongoDB to store all it’s data. I’m using congomongo as the Clojure wrapper, and it’s been fairly simple to integrate with the existing game code as I can replace normal Clojure functions like reduce with versions that iterate over records in the database. These can also be written to load data and work on it in chunks, to keep the memory overhead fixed: