In late December the Mobile Life Centre in Stockholm ran the first focus test for Germination X, and last week I met up with them to get the feedback in detail. Even for a small study of 5 players, this was very detailed – but the broad conclusions were that the underlying ‘ecological model’ of permaculture is being communicated very effectively via the game – the players got the idea of this quickly through playing, without it being explicitly communicated in a didactic manner. 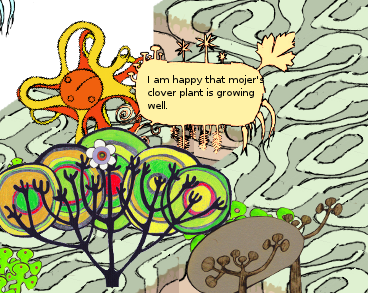 On the downside, the role of the spirits were not clear to players at all – confusion from the quantity of messages, players constantly logging out to see what was going on from the public message timeline, and both the characters emotional state and connections between them and the permaculture plant layers were completely lost in the noise. Added to this, with the short duration of the study (1.5 hours) the pick power restriction was a massive problem, leaving players with nothing to do for long periods of time.

With more focus studies planned I’ve updated the game to deal with some of these issues as best I can:

Pick power is now recharged much faster. To balance this out, and add to the challenge of foraging for seeds and fruit they now regrow much slower and are harder to find in the world.

The way spirit messages are dealt with is now completely overhauled. All messages they send are viewable by all players all the time. They are displayed as speech bubbles by the spirits, making it clearer that they are responsible for them. They are now filtered out of players timeline messages to avoid problems with spamming too many messages.

There are also a bunch of updates to improve responsiveness of the world and make reactions to player’s activity faster to experience. Plant no longer gain health from nearby plants which are ill, which means reactions to new plants happen faster. The season length is shorter again (10 minutes for a full year cycle). Some optimisation of the mongodb code dealing with message dispatching means I’ve been able to double the refresh rate of the game (number of world tiles updated per second) while also reducing overall server CPU usage.