Continuing with the structured procrastination R&D project on evolvable hardware, I’m proud to report a pretty decent light following robot – this is a video of the first real-world test, with a program grown from primordial soup chasing me around:

After creating a software model simulation of the robot in the last post, I added some new bytecode instructions for the virtual machine: LEYE and REYE push 1 on the stack if we are detecting light from the left or right photoresistor, zero if it’s dark. LMOT and RMOT pop the top byte of the stack to turn the motors on and off. The strategy for the genetic algorithm’s fitness function is running each 16 byte generated program on the robot for 1000 cycles, moving the robot to a new random location and facing direction 10 times without stopping the program. At the end of each run the position of the robot was compared to the light position, and the distances were averaged as the fitness. Note that we’re not assigning fitness to how fast we get to the light. 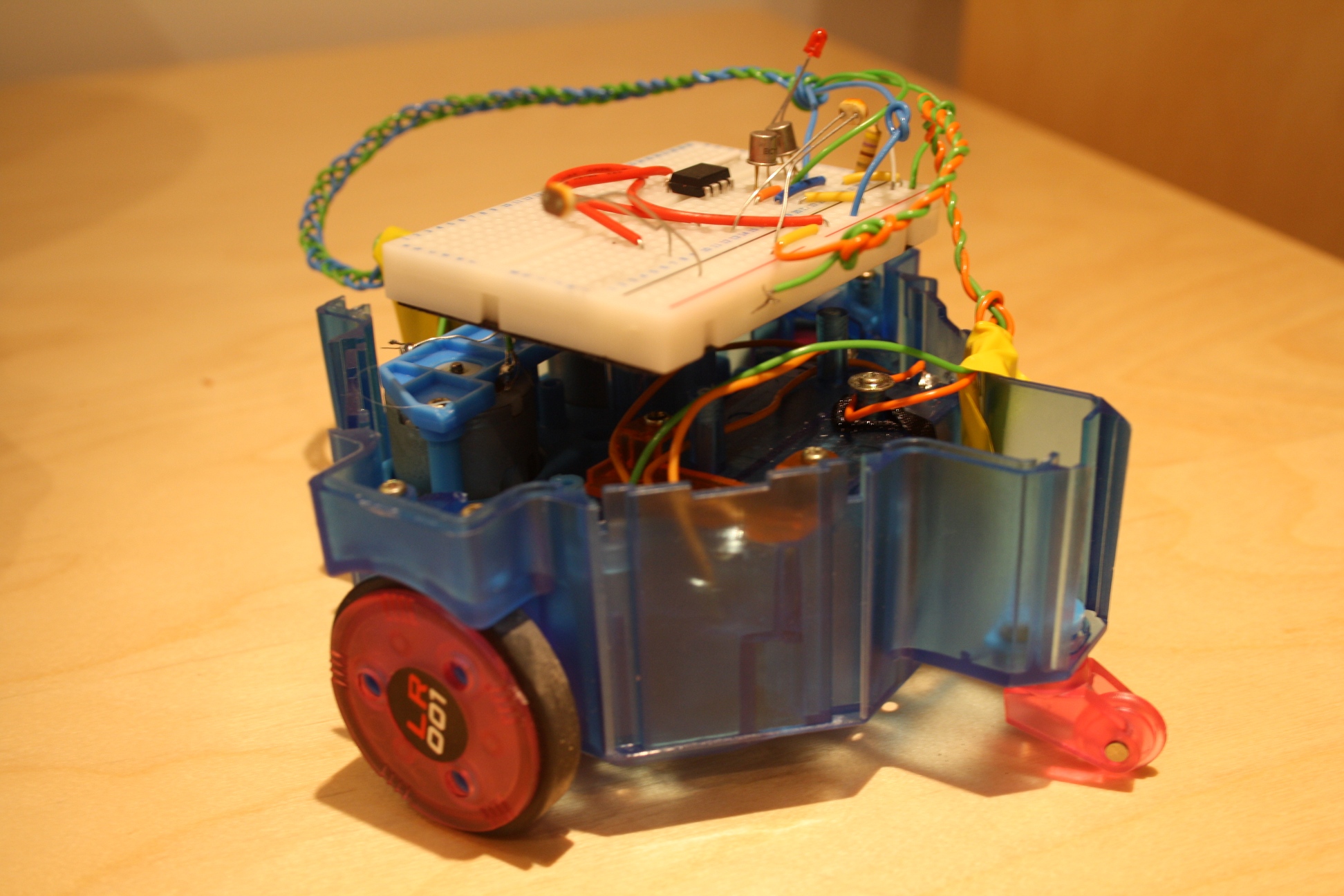 This is pretty simple stuff, but it’s still interesting to look at what happens over time in the genetic algorithm. Both motors are running at startup by default, so the first successful programs learn how turn one motor off – otherwise the robot just shoots off and scores really low. So the first generations tend to just go round in circles. Then they start to learn how to plug the eyes in, one by one edging them closer to the goal – then it’s a case of improving the sample rate to improve accuracy, usually by using jmps and optimising the loops.

This is an example of a fairly simple and effective solution, the final generation shown in the animation above:

Some explanation, the right and left eyes are plugged into the left and right motors, which is the essential bit making it work, the ‘nop’s are all values that are not executable. The ‘rmot’ before the ‘jmpz’ makes the robot scan around in circles if there is no light detected (strangely, a case which doesn’t happen in the simulation). The argumant to ‘jmpz’ is 0 (loop) which is actually the 17th byte – so it’s cheekily using memory which has been initialised to zero as part of it’s program.

This is a more complicated and stranger program which evolved after 70 generations with a high fitness, I haven’t worked out what it’s up to yet: