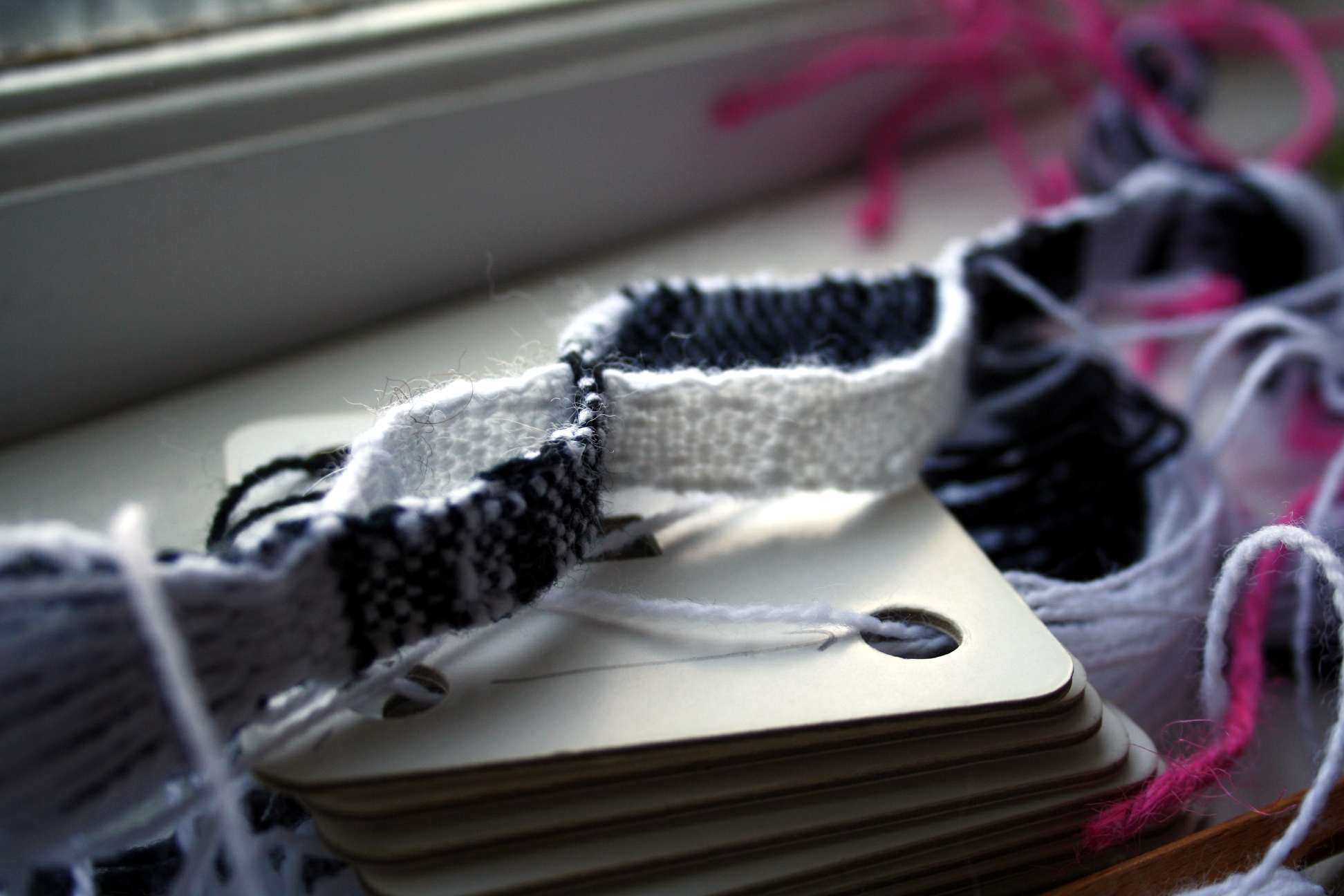 One of the most inspiring things we heard from Leslie Downs (our Advisor on textile innovation) was about the way he manufactures high specification structures for aerospace engineering by weaving on ordinary looms, sometime even hand looms for their flexibility. It turns out that some of these techniques are also possible with tablet weaving: I came across this mysterious diagram in ‘Byways in Handweaving’ by Mary Meigs Atwater:

The text doesn’t really go into much detail about what you can do with “Icelandic double weave”, nor is there much information online that I could find, so I had a play. Normally you weave tablets by rotating the cards quarter turns and using the shed between the top/bottom sides of the cards with them straight. With this technique you rotate quarter turns back and forward from the orientation in the diagram instead, and use two separate wefts for the top and the bottom sheds. This results in two separate fabrics woven at the same time which can be reattached by going back to normal weaving, or crossed over like this:

This technique is very versatile and results in strong structures. It’s possible for example to connect the weaves along the edges and create long tubes or weave more than two layers attached in different ways. In this way, weaving is an ancient 3D printing process that converts code into structure (and only produces biodegradable waste).

There are some things that you can only do with tablet weaving. As the ‘loom’ as such is just a disconnected pack of cards it’s possible to reorganise it as you go along, for example if you use two wefts and split the weave in half, you get two separate fabrics which can be rejoined later on – they don’t even need to be connected in the same way, I tried crossing them over here – which seemed to work easily enough:

With the use of four wefts you can even do a double layer weave at the same time as a split like this to create more complex structures, I had a go at that but I ended up with my threads in a mess and accidentally attached the two layers by mistake – I need more practice, and possibly using more than 10 cards would help too.

You can also turn corners with tablet weaving, my first attempt at that wasn’t so great as I found it really difficult to maintain the tension and lost count of my wefts, but you do this by simply gradually adding extra wefts to one side of the weaving. I attempted a full “u-turn”, shown here after some smaller double weave sections:

It would be interesting to think about how to add these structural modifications to the current tablet language. They all involve adding/removing wefts or skipping warp threads with wefts – notating this is probably fairly simple, but modelling the results would be very challenging indeed, if it’s even possible.

4 thoughts on “Coding structure with threads”