AI in games is a hot topic at the moment, but most examples of this are attempts to create human-like behaviour in characters – a kind of advanced puppetry. These characters are also generally designed beforehand rather than reacting and learning from player behaviour, let alone being allowed to adapt in an open ended manner. 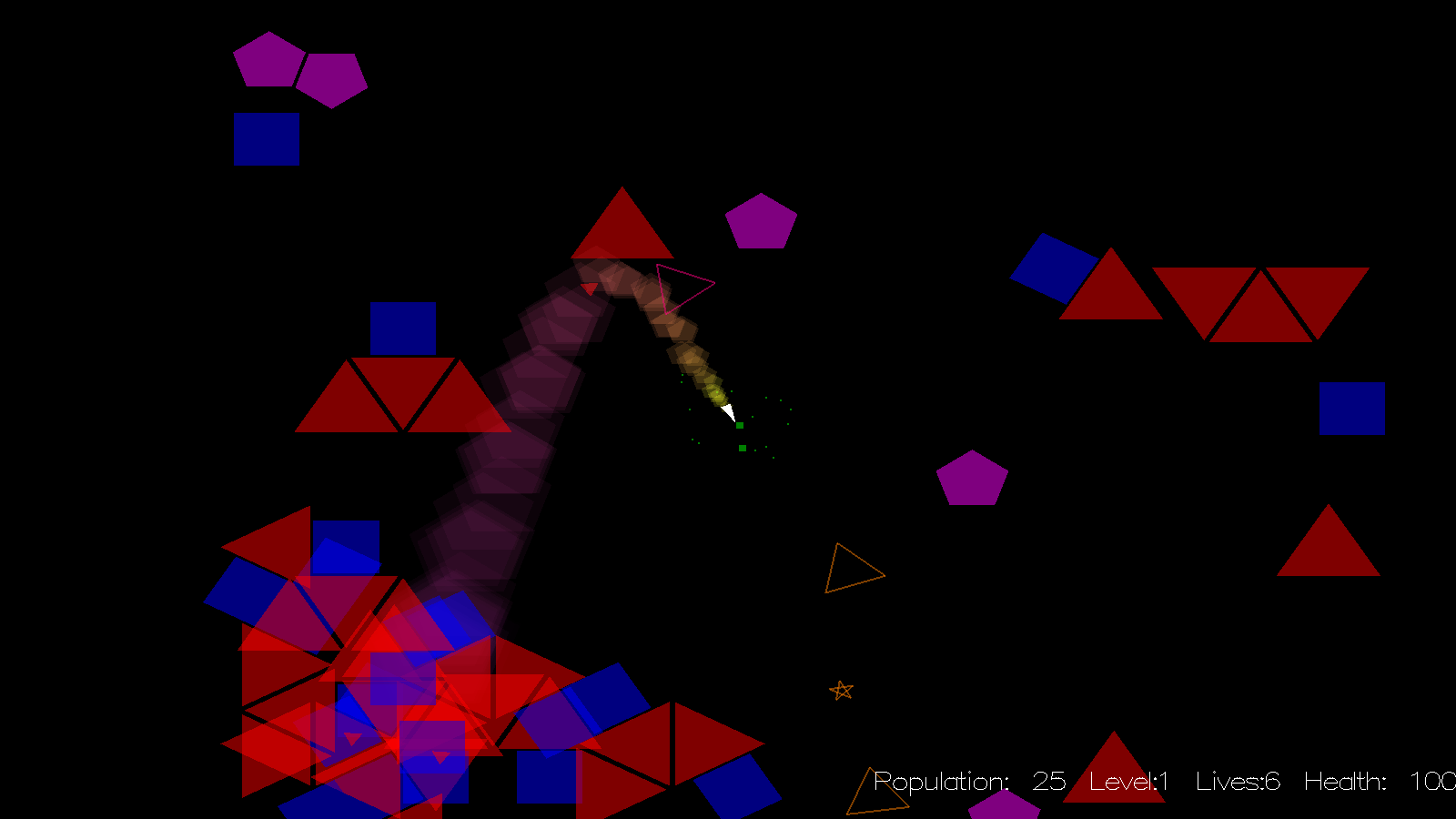 Rocketing around the gravitational wells.

Geo was an free software game I wrote around 10 years ago which I’ve recently rediscovered. I made it a couple of years after I was working for William Latham’s Computer Artworks – and was obviously influenced by that experience. At the time it was a little demanding for graphics hardware, but it turns out the intervening years processing power has caught up with it.

This is a game set in a large section of space inhabited by lifeforms comprised of triangles, squares and pentagons. Each lifeform exerts a gravitational pull and has the ability to reproduce. It’s structure is defined by a simple genetic code which is copied to it’s descendants with small errors, giving rise to evolution. Your role is to collect keys which orbit around gravitational wells in order to progress to the next level, which is repopulated by copies of the most successful individuals from the previous level. 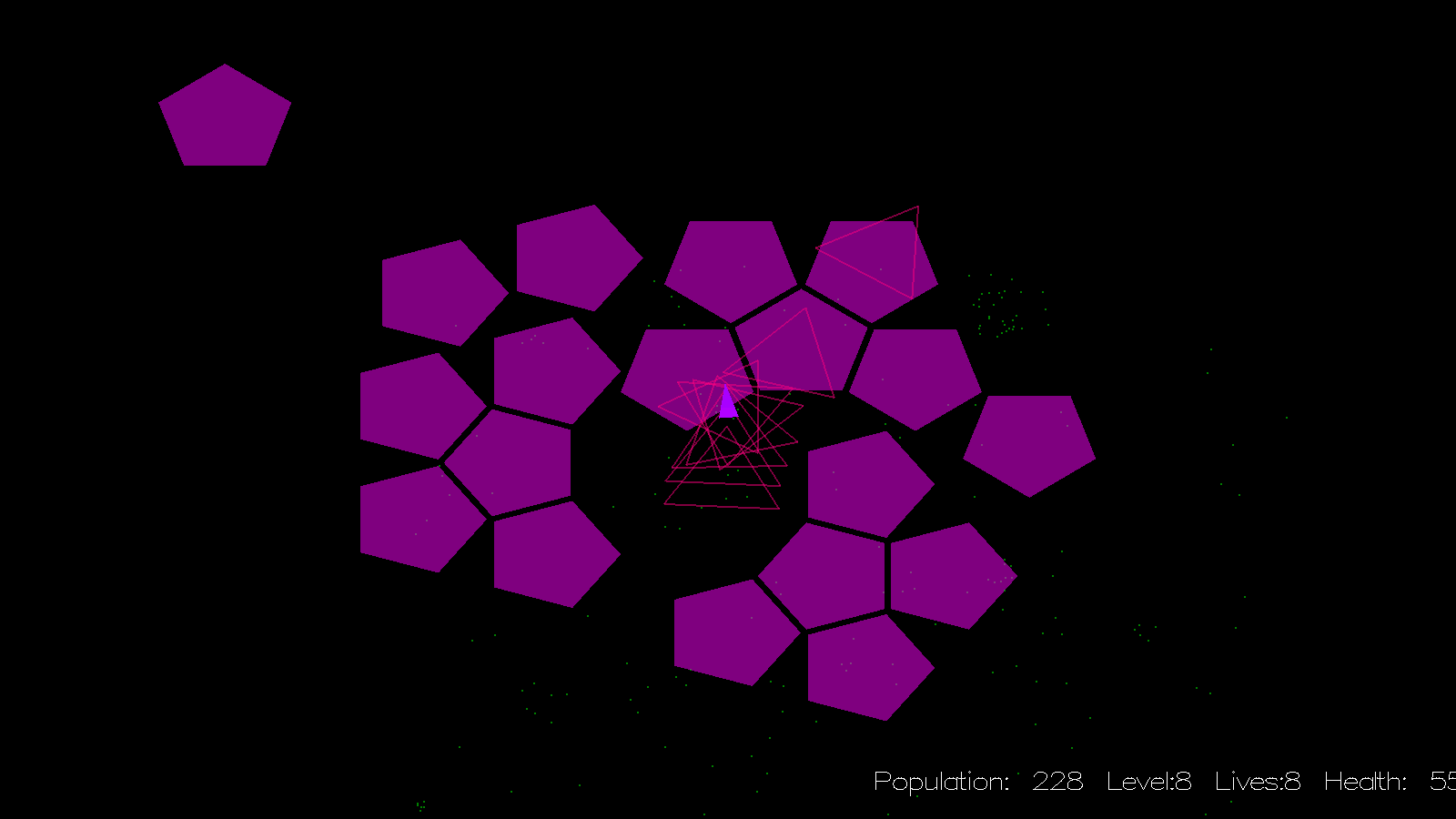 Each game starts with a random population, so the first couple of levels are generally quite simple, mostly populated by dormant or self destructive species – but after 4 or 5 generations the lifeforms start to reproduce, and by level 10 a phenotype (or species) will generally have emerged to become an highly invasive conqueror of space. It becomes an against the clock matter to find all the keys before the gravitational effects are too much for your ship’s engines to escape, or your weapons to ‘prune’ the structure’s growth.

I’ve used similar evolutionary strategies in much more recent games, but they’ve required much more effort to get the evolution working (49,000 players have now contributed to egglab’s camouflage evolution for example). 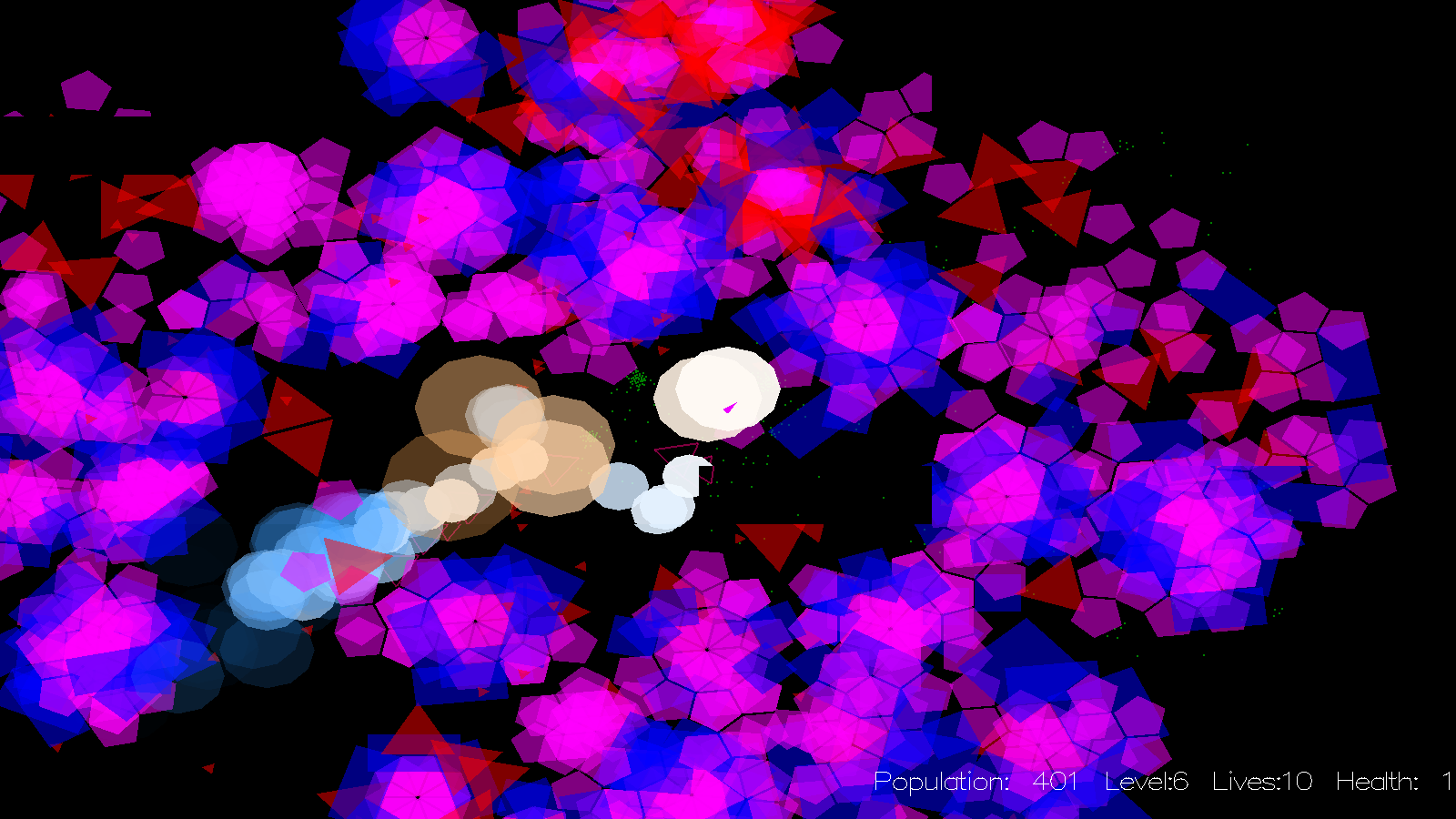 A well defended 'globular' colony – a common phenotype to evolve.

What I like about this form of more humble AI (or artificial life) is that instead of a program trying to imitate another lifeform, it really just represents itself – challenging you to exist in it’s consistent but utterly alien world. I’ve always wondered why the dominant post-human theme of sentient AI was a supercomputer deliberately designed usually by a millionaire or huge company. It seems to me far more likely that some form of life will arise – perhaps even already exists – in the wild variety of online spambots and malware mainly talking to themselves, and will be unnoticed – probably forever, by us. We had a little indication of this when the facebook bots in the naked on pluto game started having autonomous conversations with other online spambots on their blog. 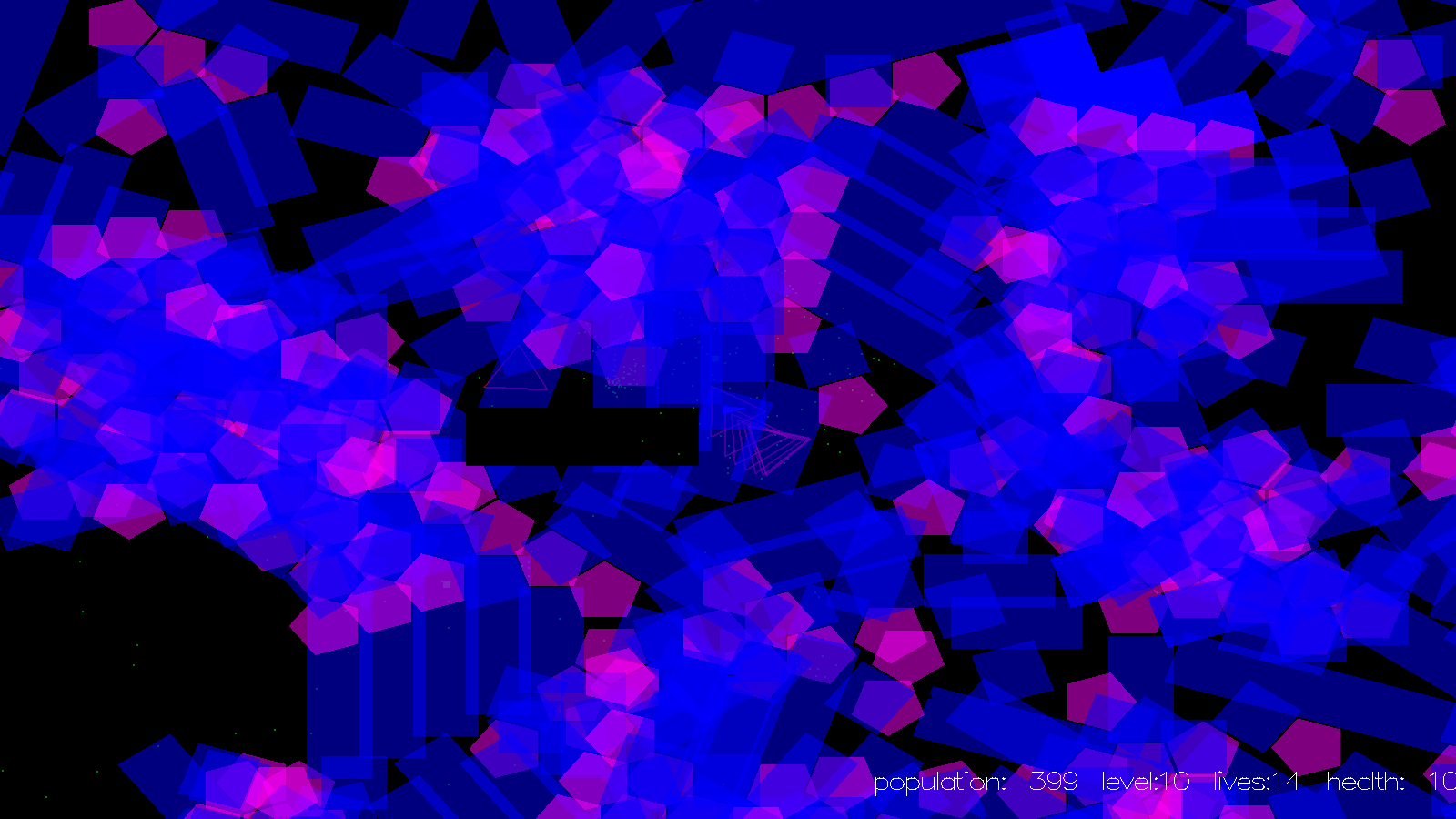 Less speculatively, what I’ve enjoyed most about playing this simple game is exploring and attempting to shape the possibilities of the artificial life while observing and categorising the common solutions that emerge during separate games – cases of parallel evolution. I’ve tweaked the between-levels fitness function a little, but most of the evolution tends to occur ‘darwinistically’ while you are playing, simply the lifeforms that reproduce most effectively survive. 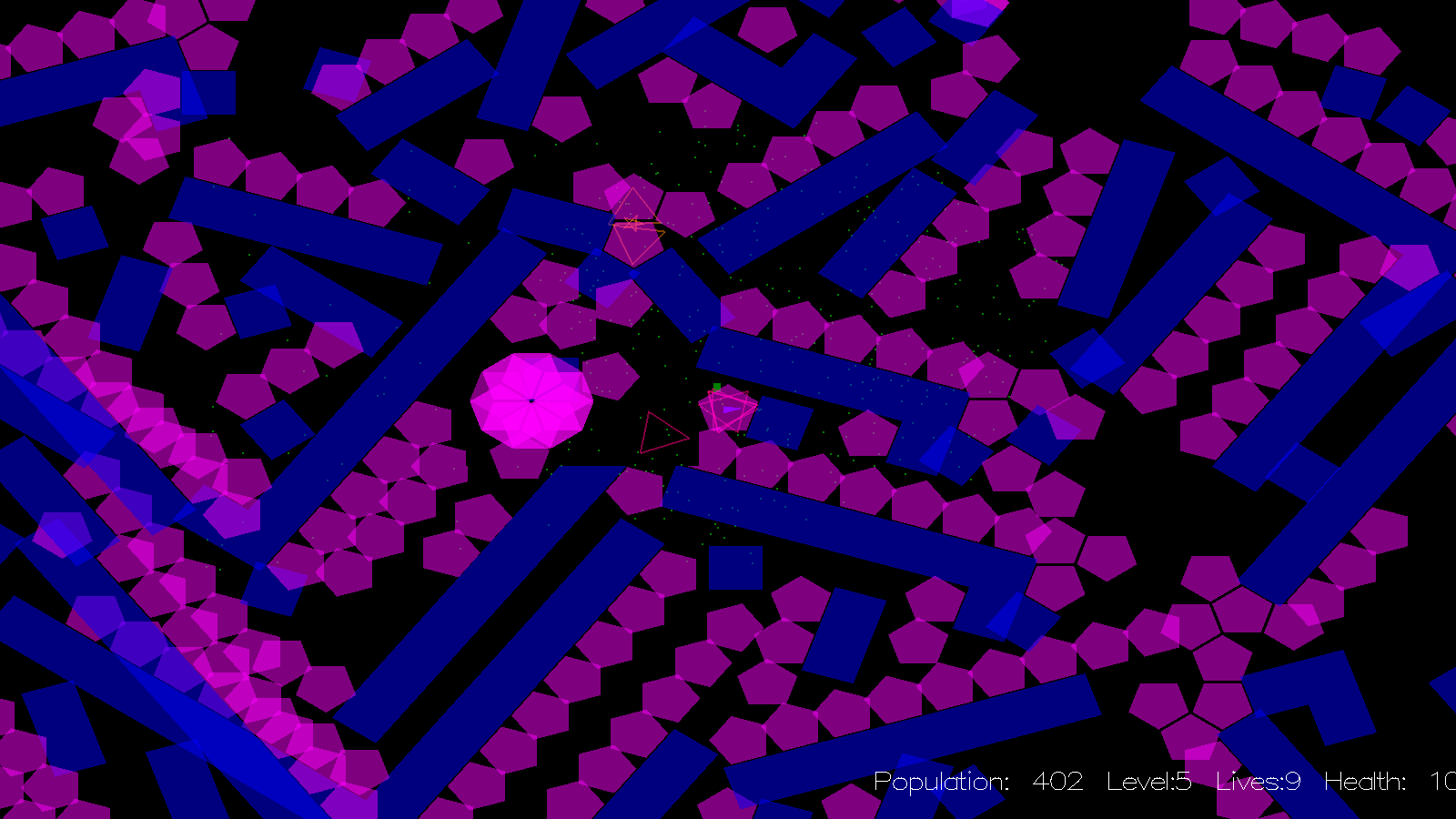 You can get the updated source here, it only requires GLUT and ALUT (a cross platform audio API). At one time it compiled on windows, and should build on OSX quite easily – I may distribute binaries at some point if I get time. 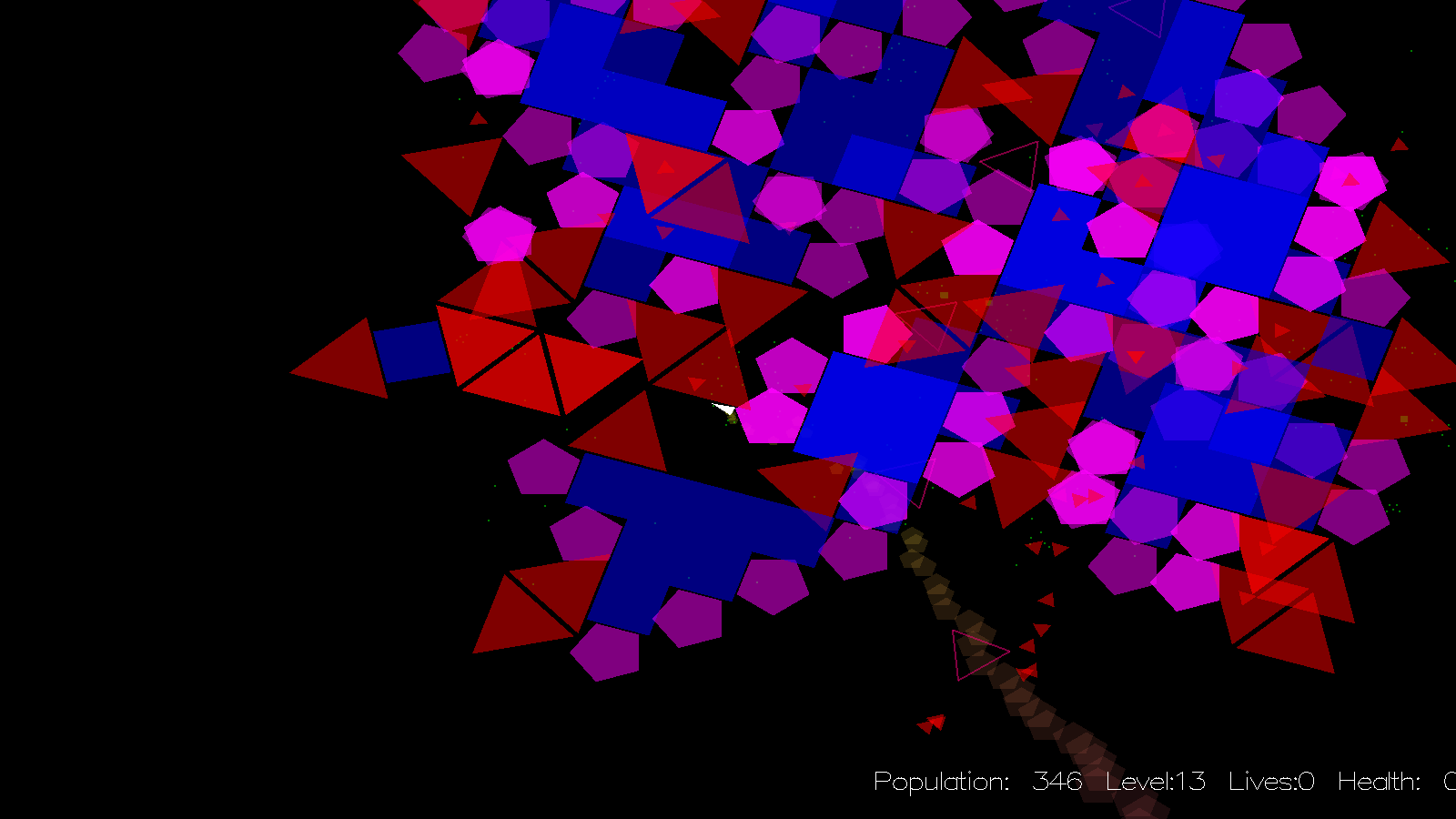 A ‘block grid’ phenotype which is also common.