Some of the research partners working on Lirec have a history of working together on an quite unique educational game called FearNot! which attempts to teach children strategies to deal with bullying by allowing them to play with the interactions which happen in social groups, in a safe context.

I’ve been having a play with one of the parts planned on being used on Lirec, the social/emotional AI system, which is called FAtiMA (the Fearnot Affective Mind Architecture). All the code is available on sourceforge, unfortunately the game requires Windows to run. 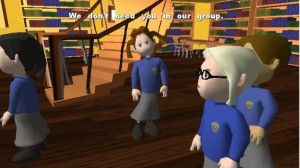 I’ve spent the last few days discussing robotics and artificial companions at foam’s Brussels studio, at the Lirec consortium meeting. I took some pics on the last day, which included an interesting workshop on grounded design led by Lars Erik Holmquist and his colleagues from the Swedish Institute of Computer Science. 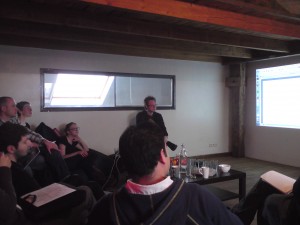 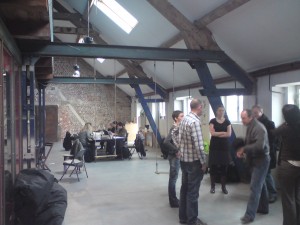 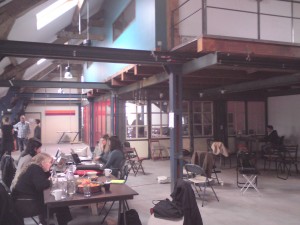 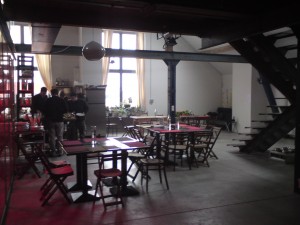 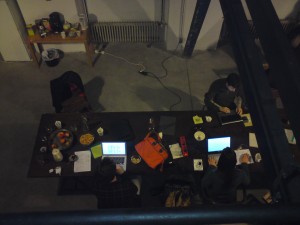 Noting an absence in the Lirec research about games (maybe I’ve missed it – there is a lot to read) I’ve started collecting together games which attempt to nurture a bond between the player and another character. My first thought was Ico, but I also remembered the Chau in Sonic Adventure, which migrate from the DreamCast to the VMUs and back again – covering one of Lirec’s core themes.

Java’s quite good (I’ve never looked at it before). All the things I like about C++ with a class system like PLT Scheme. It won’t stop me Scheming, but it might mean I write less C++ in future. I’ve been playing with this game engine quite a bit too.

I’ll get back to posting more pictures and less words soon, I can’t have this turning into a proper blog…

In order to get more context for potential artistic directions for the lirec project, I’ve started compiling a timeline of robots in art – I haven’t even got as far as electricity yet…

The Digesting Duck of Vaucanson

My first solar engine, using a flashing LED as a voltage trigger. Has a sort of fluttery daintiness…

A bit of research into BEAM robots. Looking at the reactive approach to sensor -> actuator control, and trying to understand what Nv Neurons and Suspended Bicores are all about. Nice to have a quick go at building something in the midst of reading stuff.

My work on Lirec has begun this week – lots of reading to start with, and putting notes on the libarynth.