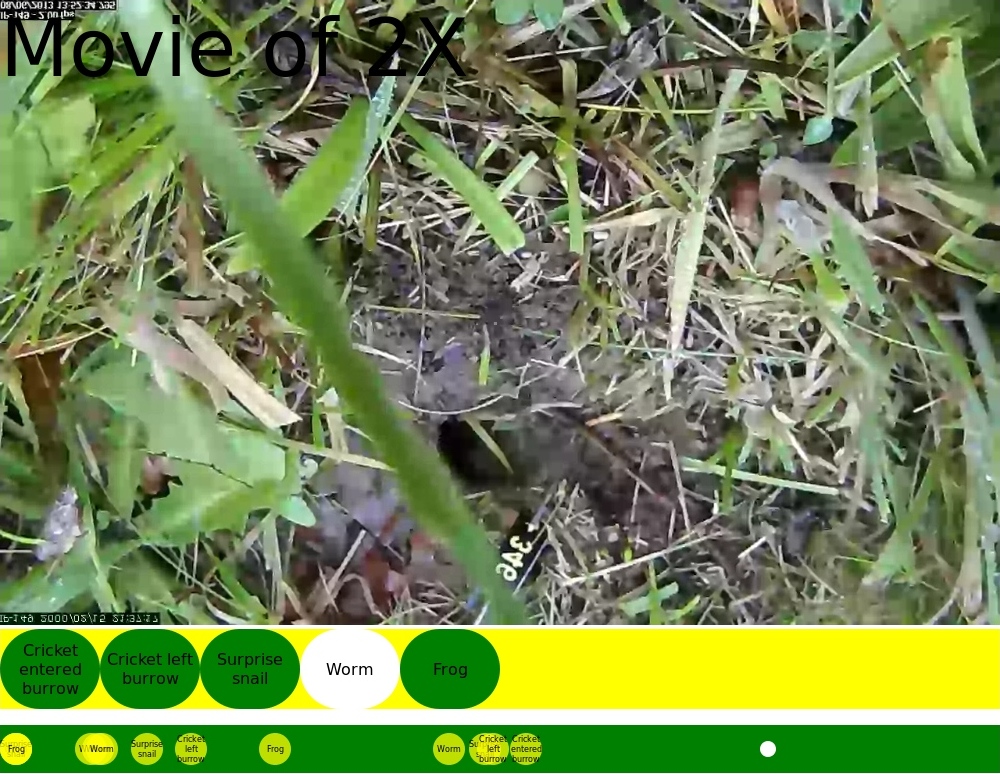 From earlier in the year at Thinking Digital 2014 in Gateshead. 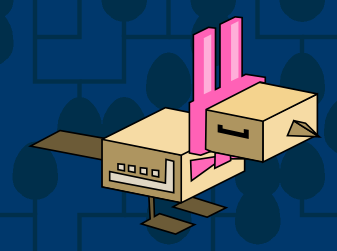 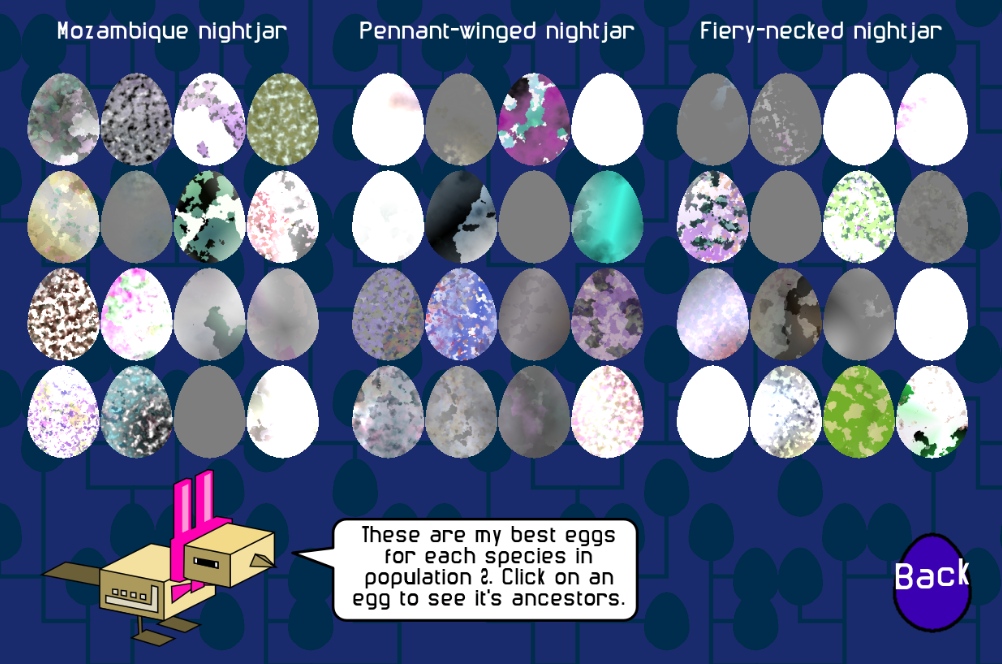 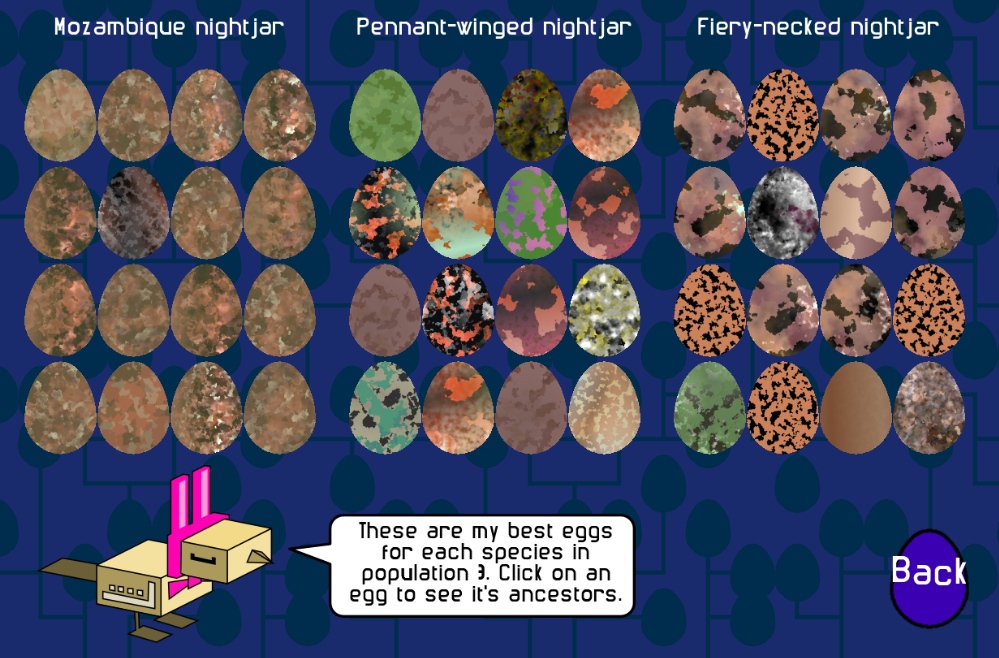 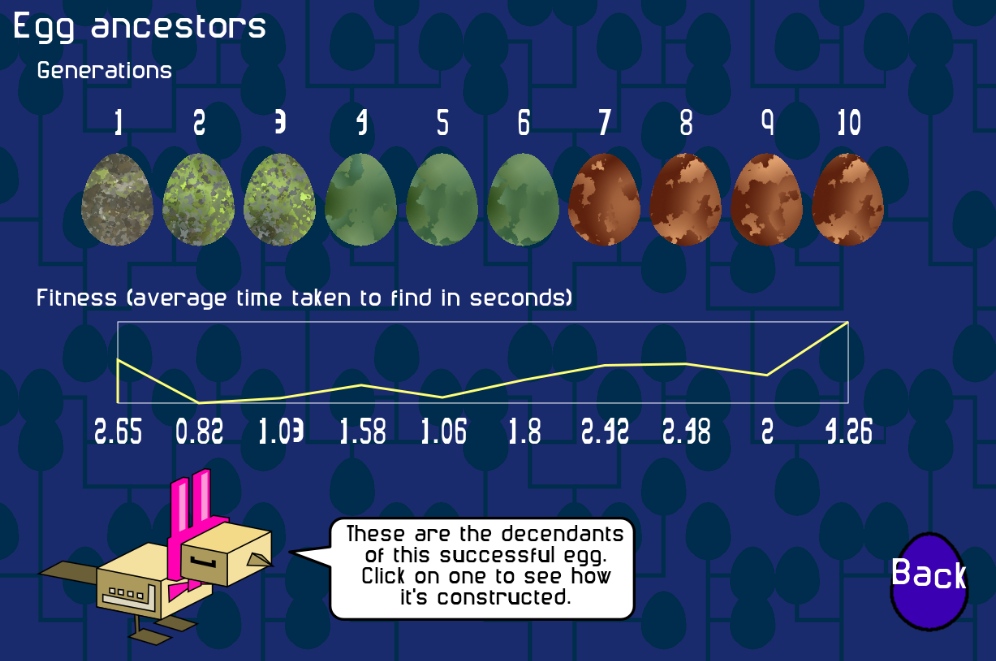 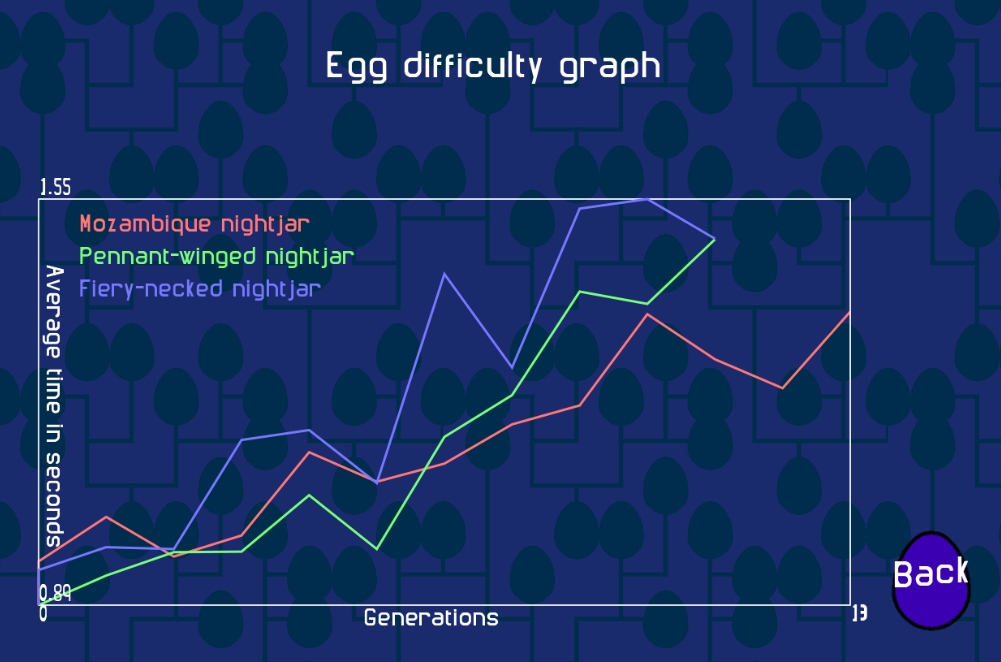 I’m putting the final pieces together for the release of the all new Project Nightjar game (due in the run up to Easter, of course!) and the automatic pattern generation has been a focus right up to this stage. The challenge I like most about citizen science is that along with all the ‘normal’ game design creative restrictions (is it fun? will it work on the browser?) you also have to satisfy the fairly whopping constraints of the science itself, determining which decisions impact on the observations you are making – and being sure that they will be robust to peer review in the context of publication – I never had to worry about that with PlayStation games 🙂 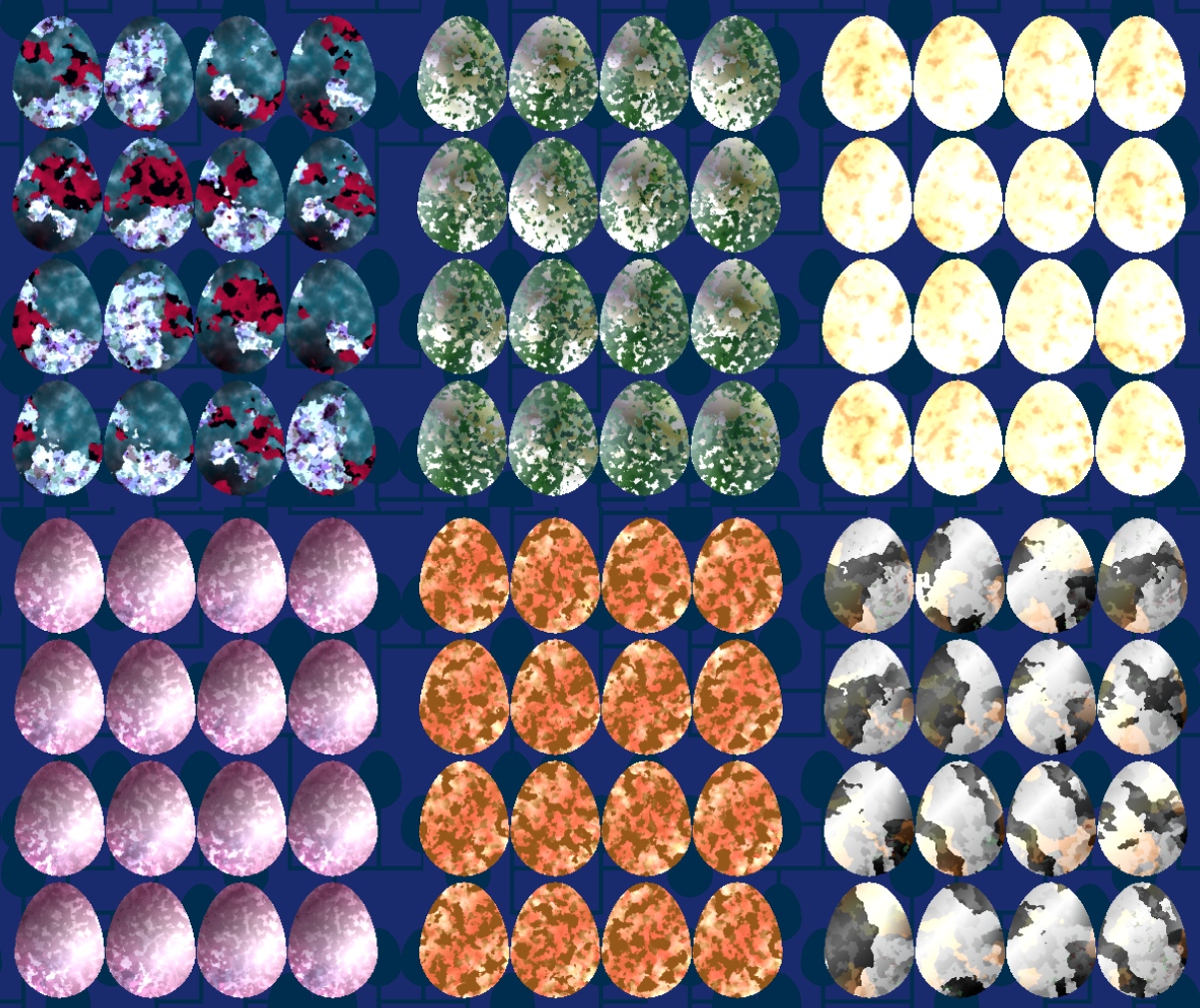 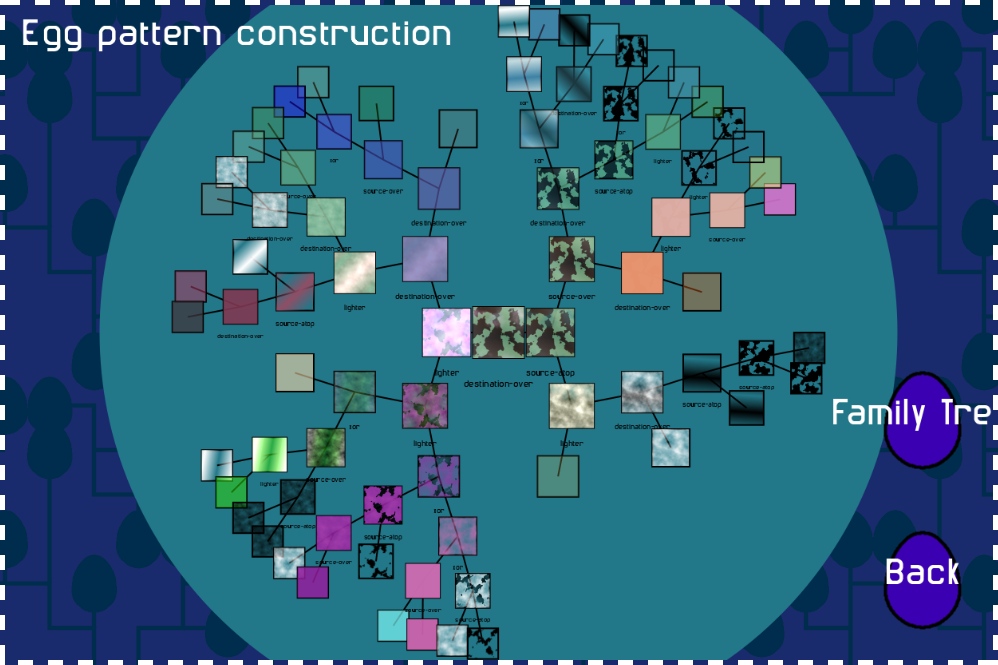 With this game, similar to the last two, we want to analyse people’s ability to recognise types of pattern in a background image. Crucially, this is a completely different perception process from recognition of a learned pattern (a ‘search image’), so we don’t want to be generating the same exact egg each time from the same description – we don’t want people to ‘learn’ them. This also makes sense in the natural context of course, in that an individual bird’s eggs will not be identical, due to there being many many additional non-deterministic processes happening that create the pattern.

The base images we are using are wrapped Perlin noise at different scales, and with different thresholds applied. These are then rotated and combined with each other and plain colours with the browser’s built in composite operations. Ideally we would generate the noise each time we need it with a different random seed to make them all unique, but this is way too slow for HTML5 Canvas to do (pixel processing in Javascript is still painful at this scale). To get around this we pre-render a set of variations of noise images, the genetic program picks one of four scales, and one of two thresholds (and one without threshold) and we randomly pick a new variation of this each time we render the egg. The image at the top shows the variation that happens across 6 example programs. Below are some of the noise images we’re using: 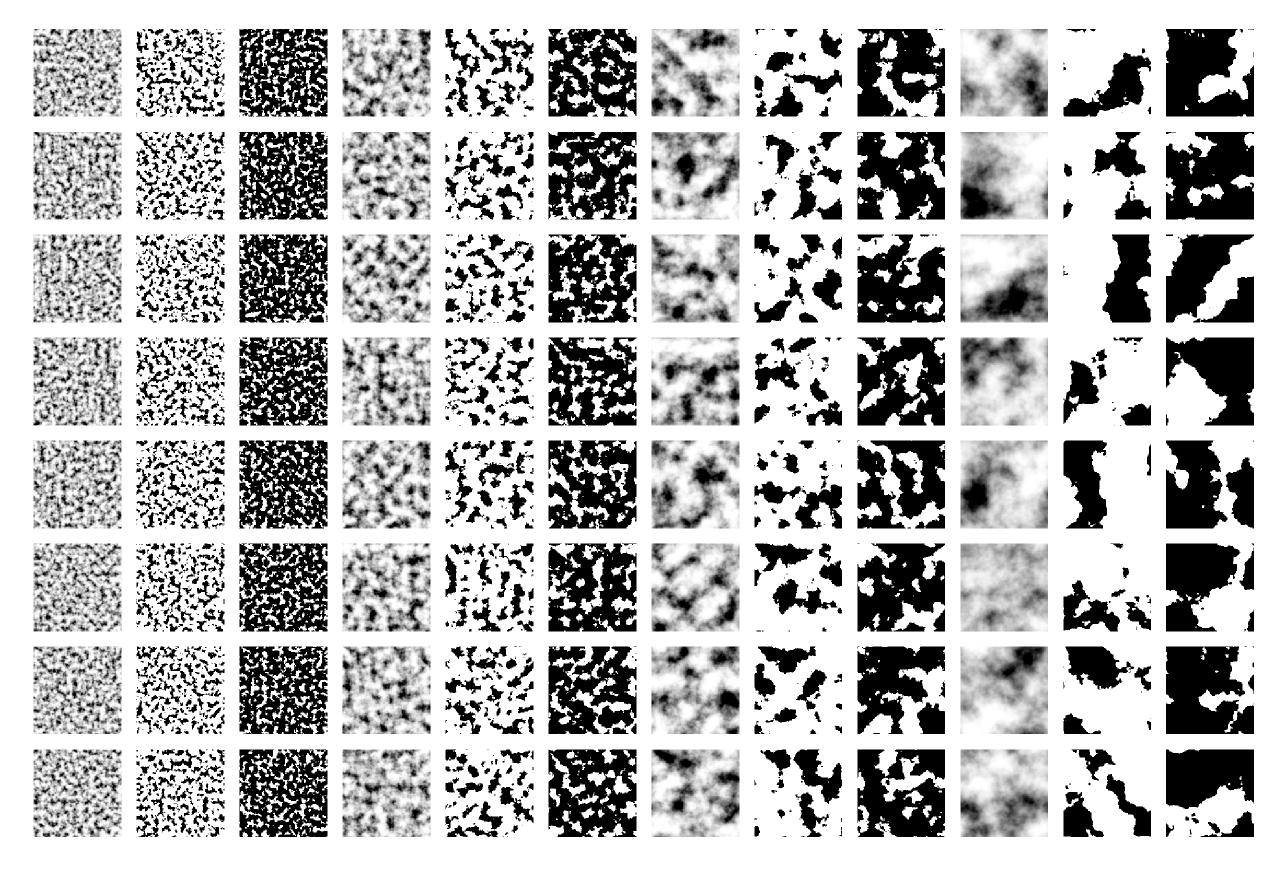 We’ve had tens of thousands of people spotting nightjars and donating a bit of their time to sensory ecology research. The results of this (of course it’s still on-going, along with the new nest spotting game) is a 20Mb database with hundreds of thousands of clicks recorded. One of the things we were interested in was seeing what people were mistaking for the birds – so I had a go at visualising all the clicks over the images (these are all parts of the cropped image – as it really doesn’t compress well): 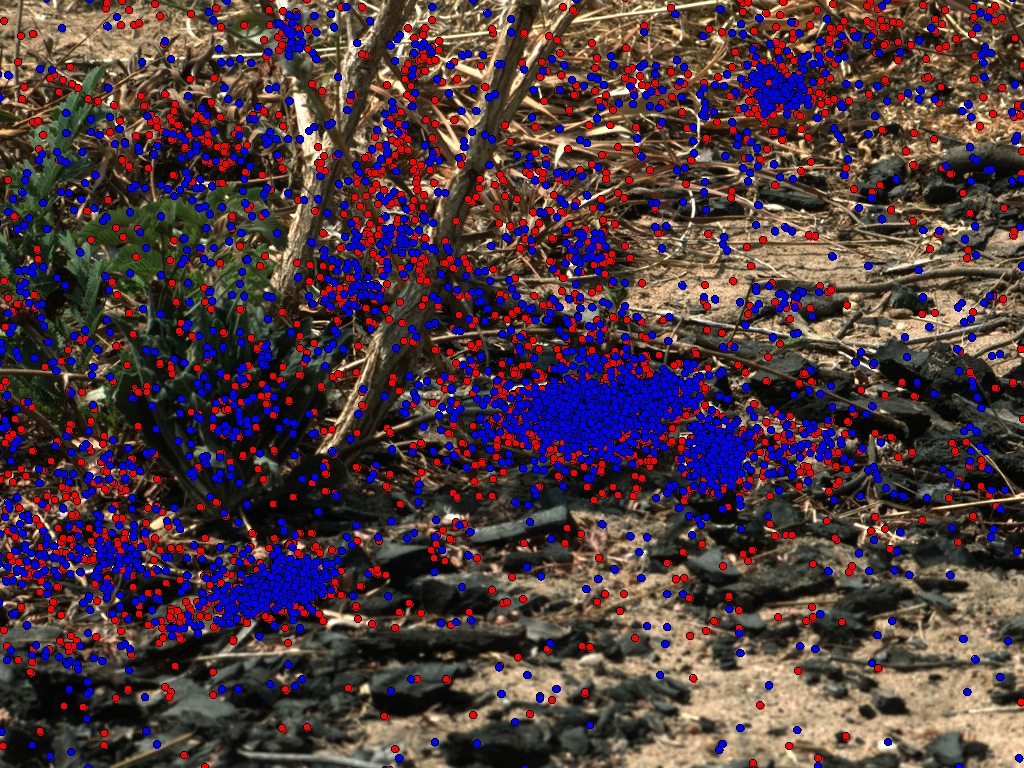 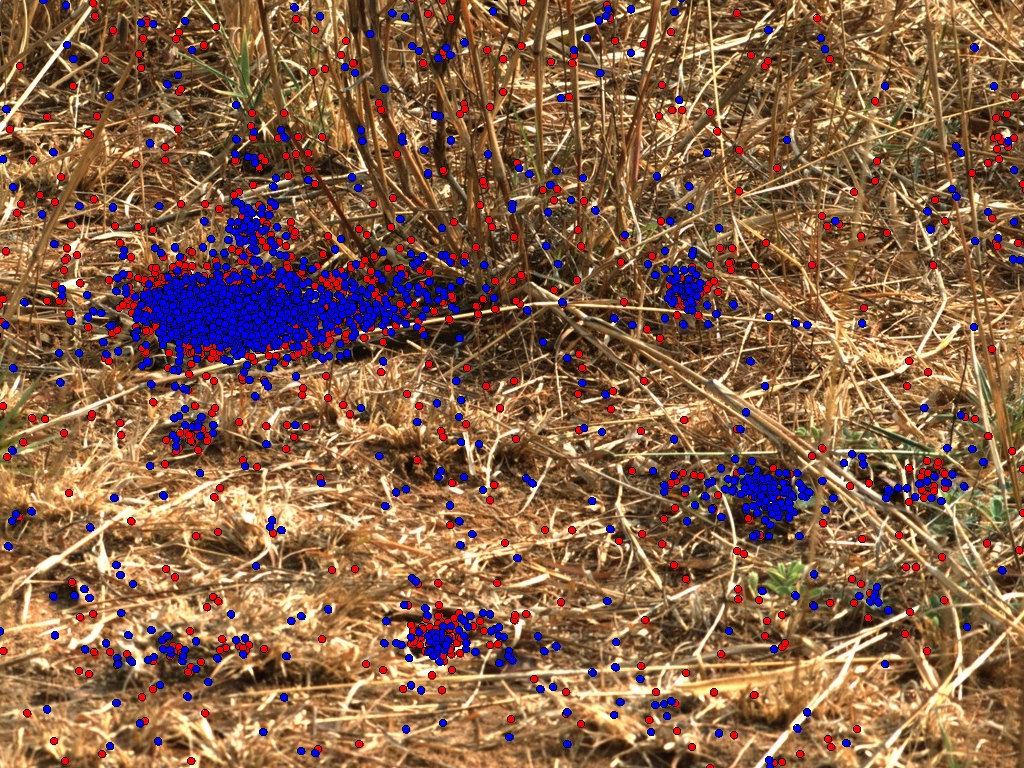 Then, looking through the results – I saw a strange artefact: 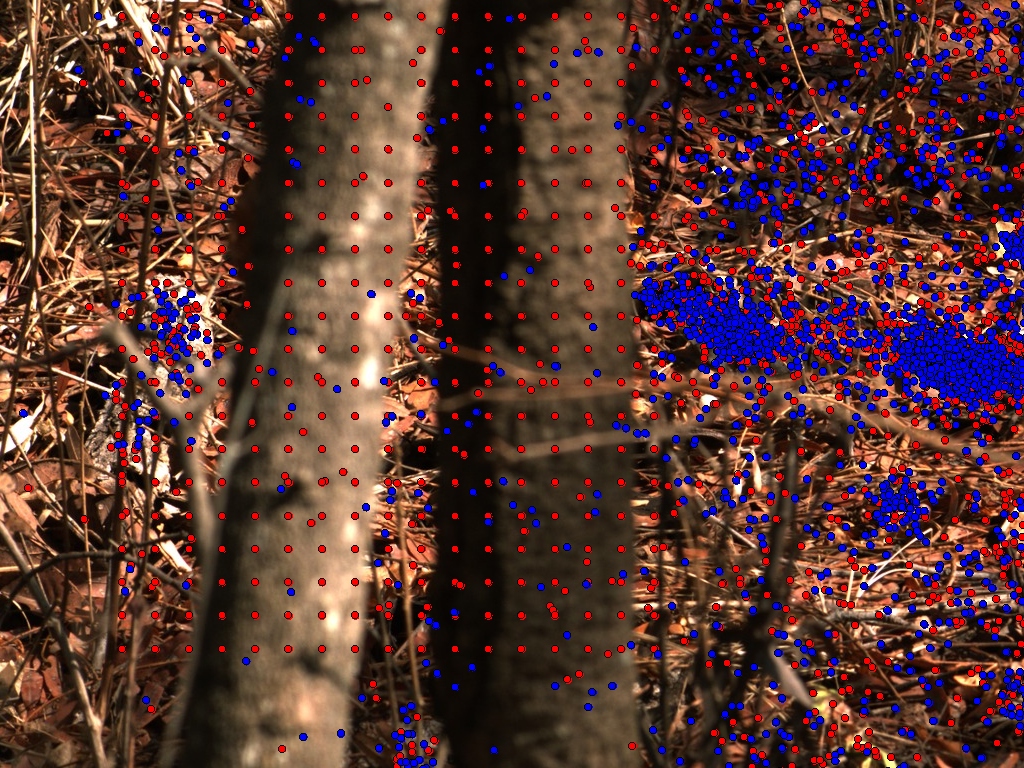 My first thought was that someone had tried cheating with a script, but I can hardly imagine that anyone would go to the bother and it’s only in one image. Perhaps some form of bot or scraping software agent – I thought that browser click automation was done by directly interpreting the web page? Perhaps it’s a fall back for HTML5 canvas elements?

It turns out it’s a single player (playing as a monkey, age 16 to 35 who had played before) – so easy enough to filter away, but in doing that I noticed the click order was not as regular as it looked, and it goes a bit wobbly in the middle:

Someone with very precise mouse skills then? 🙂

We’ve released a new game for Project Nightjar called Where is that nest? This is an adaptation of Where is that nightjar?, but the variety of species of birds is greater, some of the nests are much harder to find than the birds were so we added two levels – and a hall of fame high score table! 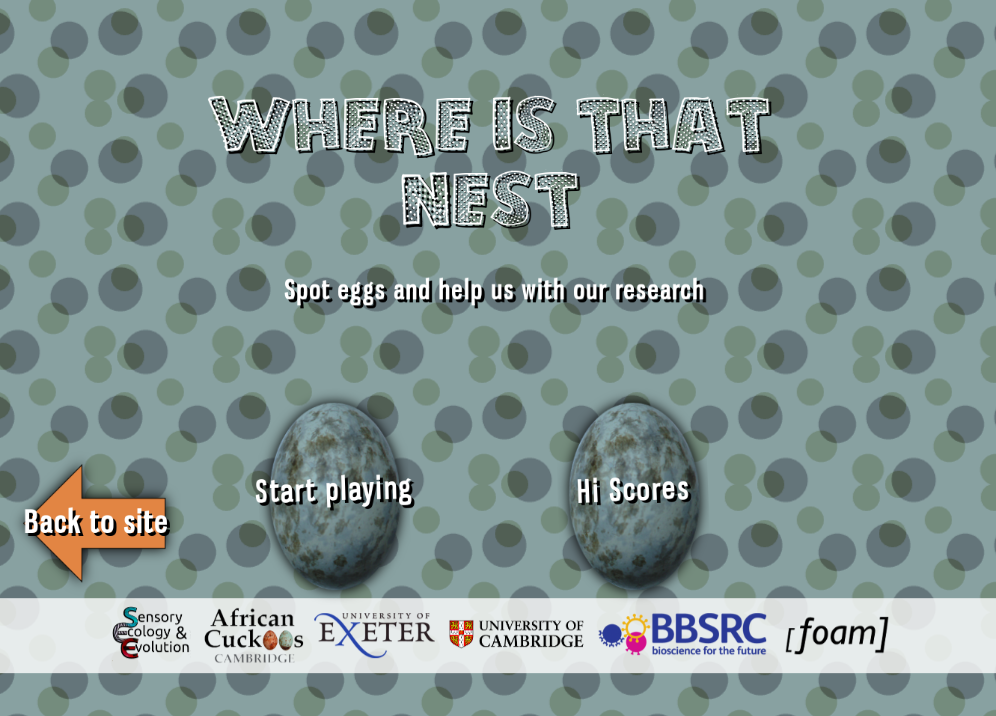 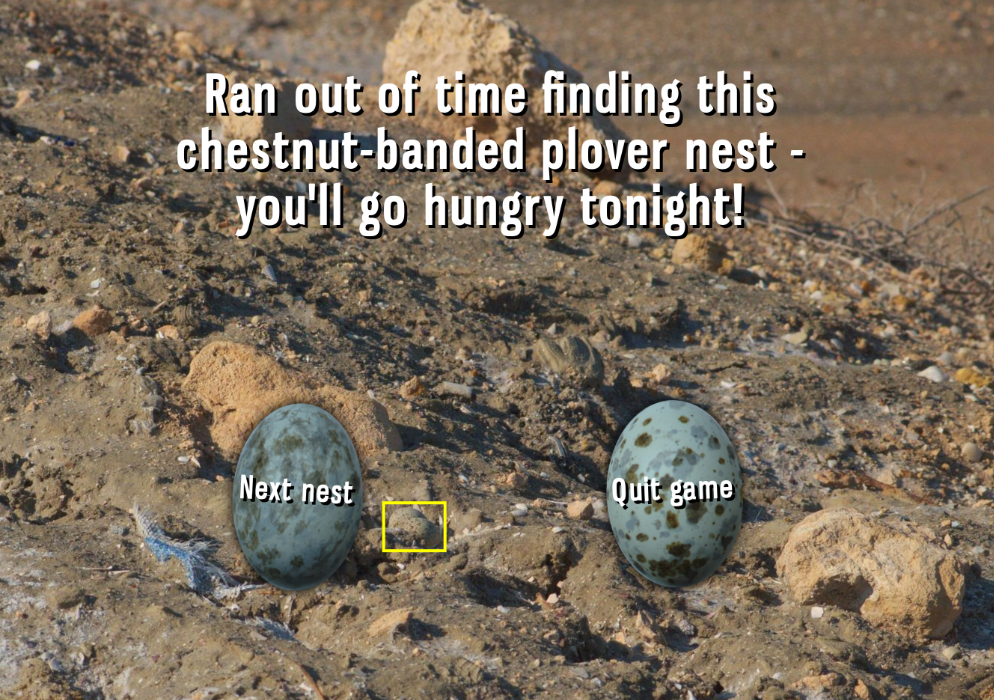 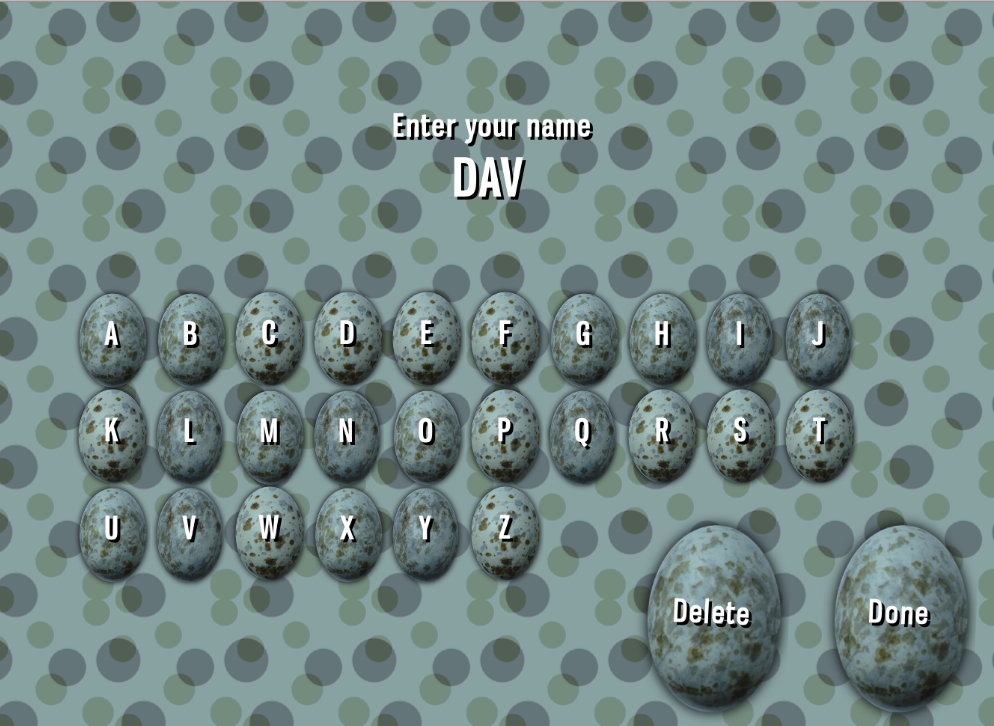 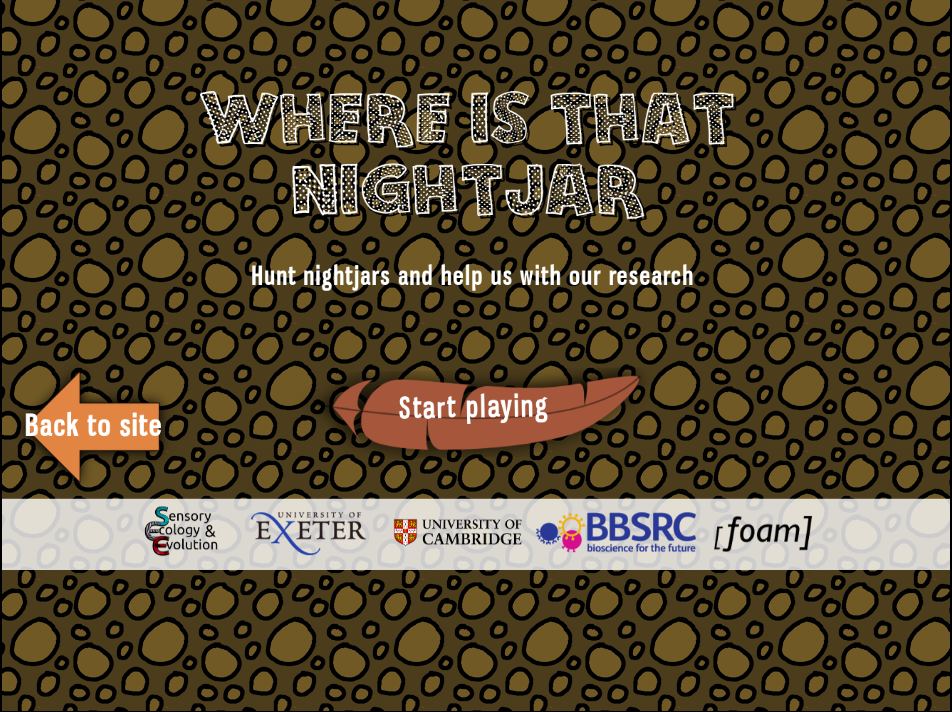 It’s a perception test to see how good you are at spotting the camouflaged birds – a great use of the photos the researchers are collecting in the field, and we can also use the data as an experiment by comparing our timing when searching for birds with different predator perception, Monkeys – who see the same colours we do, or Mongeese – who being dichromats can’t differentiate between red and green.

We also had a great chance to test the game very thoroughly at the Science in the Square event in Falmouth last week, set up by Exeter University to promote science to the public. We had a touchscreen computer set up that people could use, and had a large range of people hunting for nightjars (4155 attempted spotting “clicks” in total!).

The source code is online here, and makes use of the Scheme->Javascript compiler built for planet fluxus which as come in really handy for rapid prototyping this game. Keep up to date with these games (there are more on the ‘drawing board’) on the official Project Nightjar site. 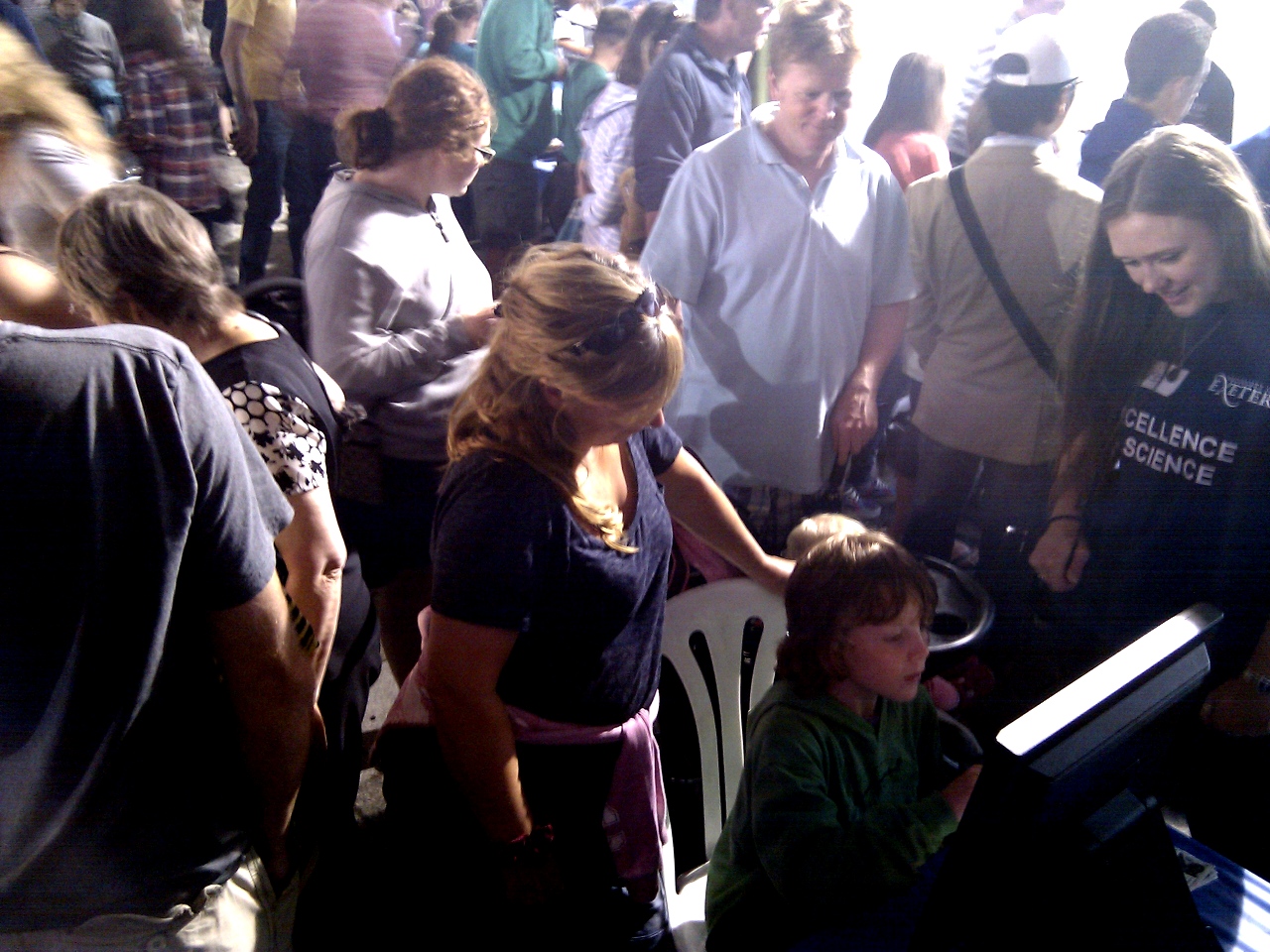 Time to announce a new a new project with the Sensory Ecology and Evolution group at Exeter University. We’re going to be working on games and experimental online work to bring their research into the evolution of camouflage and animal perception to new audiences, particularly focused on these stealthy characters, the Fiery-necked Nightjar:

The group’s previous work includes all kinds of experiments on animal perception, this one is a favourite of mine: