From earlier in the year at Thinking Digital 2014 in Gateshead.

I’m starting a new exploratory project to build a screen-less programming language based on two needs:

I’ve mentioned this recently to a few people and it seems to resonate, particularly in regard to a certain mismatch of children’s ability to manipulate physical objects against their fluid touchscreen usage. So, with my mind on the ‘pictures under glass’ rant and taking betablocker as a starting point (and weaving code as one additional project this might link with), I’m building some prototype hardware to provide the Raspberry Pi with a kind of external physical memory that could comprise symbols made from carved wood or 3D printed shapes – while still describing the behaviour of real software. I also want to avoid computer vision for a more understandable ‘pluggable’ approach with less slightly faulty ‘magic’ going on.

Before getting too theoretical I wanted to build some stuff – a flexible prototype for figuring out what this sort of programming could be. The Raspberry Pi has 17 configurable I/O pins on it’s GPIO interface, so I can use 5 of them as an address lookup (for 32 memory locations to start with, expandable later) and 8 bits as input for code or data values at these locations.

The smart thing would be to use objects that identify themselves with a signal, using serial communication down a single wire with a standard protocol. The problem with this is that it would make potential ‘symbol objects’ themselves fairly complicated and costly – and I’d like to make it easy and cheap to make loads of them. For this reason I’m starting with a parallel approach where I can just solder across pins on a plug to form a simple 8 bit ID, and restrict the complexity to the reading hardware.

I’ve got hold of a bunch of 74HC4067 multiplexers which allow you to select one signal from 16 inputs (or the other way around), using 4 bits – and stacking them up, one for each 8 bits X 16 memory locations. This was the furthest I could go without surface mount ICs (well out of my wonky soldering abilities).

Now 4 bits are working it’s harder to test with an LED – so next up is getting the Raspberry Pi attached.

Last week I had the honour of both performing with Alex and presenting at Thinking Digital 2014. Suzy O’Hara invited me to represent the intersection of art, science and education of FoAM kernow and present the work I’ve been doing with the Sensory Ecology Group at Exeter University. I did a quick Egglab game demo and related some thoughts on working with scientists and how it connects with my experience teaching programming in the classroom.

It was an interesting and unusual venue for me, organiser Herb Kim is very much developing on the TED theme – so lots of extremely well considered, motivating and inspiring talks. Much of the context was one of venture capital and startup business so it was interesting to see an explosive talk by Aral Balkan on the implications of Facebook and Google’s business models on the future of our society (he included some of the other presenter’s companies too). This reminded me very much of the themes we explored in Naked on Pluto, but coming from a new angle.

Personally his talk was challenging to me as he roundly attacked the free software movement, for essentially providing a great sandbox for enthusiasts and well funded companies – but incapable of doing much more in terms of data security for real people. As a designer, he sees this as essentially a design problem – one that these companies have solved for themselves but is utterly lacking in devices such as the Firefox phone OS. For Aral, this is fundamentally a design problem that needs it’s own movement, and new business models to be developed. These business models need to take into consideration long term usability (for which user privacy is an essential feature) rather than ultra short term profit ‘pump and dump’, selling of people’s information for vast amounts – i.e. silicon valley ‘business as usual’.

Two things are apparent to me following this talk – one is that I have been labouring under the impression that a particular focus on design is somehow implicitly tied with specific business practices – simplification as wallpapering over data harvesting, and other tactics. This is very much a short sighted developer view, and is wrong – they can of course service different types of businesses.

The other point came during his 3 slide explanation of how to start your own social network (1. fork a github repo, 2. set up a server and 3. install it). Clearly even this satirical simplification is beyond all but existing software developers (many of whom are working for companies reliant on user surveillance in some indirect or direct way). The challenge for me is that I can’t ultimately see a way to make ‘interface as user experience’ ever converge on anything other than exploitation. Can ‘user experience’ ever regard people philosophically as anything but consumers – regardless of the underlying business model?

The problem in solving that is that we now have two problems – the terrible state of software engineering preventing accessibility (i.e programming at large still stuck in the 70’s) and the lack of understanding in society of what a computer is and how it works. The second of these problems is being addressed in some part by the activities of CodeClub (Aral is [correction: was] a director of this organisation) and similar education initiatives. Regarding pushing software engineering forward, in some way I think recent livecoding takeup by musicians over programmers is a fascinating development here, in terms of showing us how programming – when it’s taken and twisted into very strange and new forms, can start to make sense and work for ‘real people’.

I’m working on a top secret project for Sam Aaron of Meta-eX fame involving the Raspberry Pi, and at the same time thinking of my upcoming CodeClub lessons this term – we have a bunch of new Raspberry Pi’s to use and the kids are at the point where they want to move on from Scratch.

This is a screenshot of the same procedural landscape demo previously running on Android/OUYA running on the Raspberry Pi, with mangled texture colours and a cube added via a new livecoding repl: 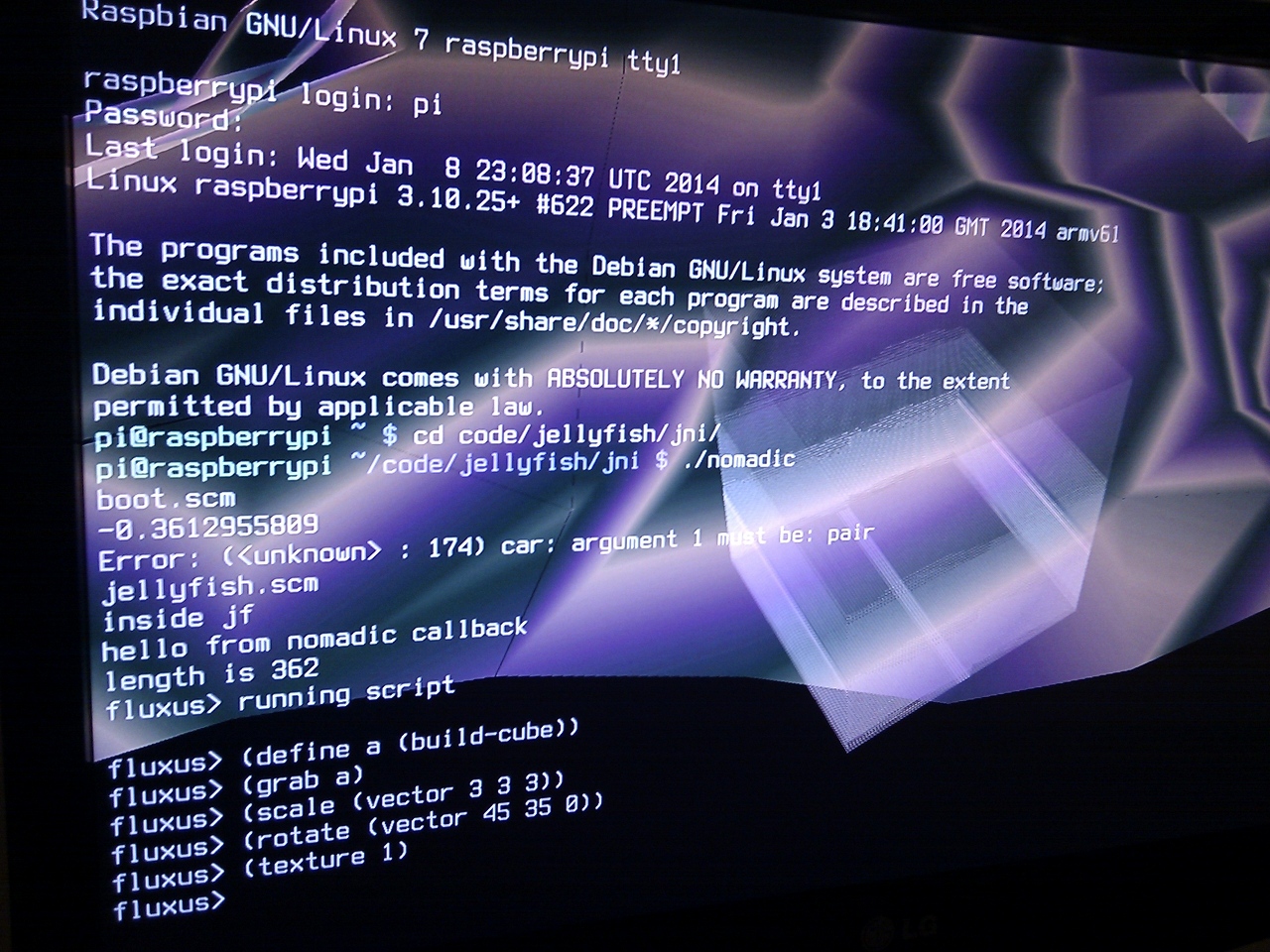 Based on my previous experiments, this program uses the GPU for the Raspberry Pi (the VideoCore IV bit of the BCM2835). It’s fast, allows compositing on top of whatever else you are running at the time, and you can run it without X windows for more CPU and memory, sounds like a great graphics livecoding GPU to me!

Here’s a close up of the nice dithering on the texture – not sure yet why the colours are so different from the OUYA version, perhaps a dodgy blend mode or a PNG format reading difference: 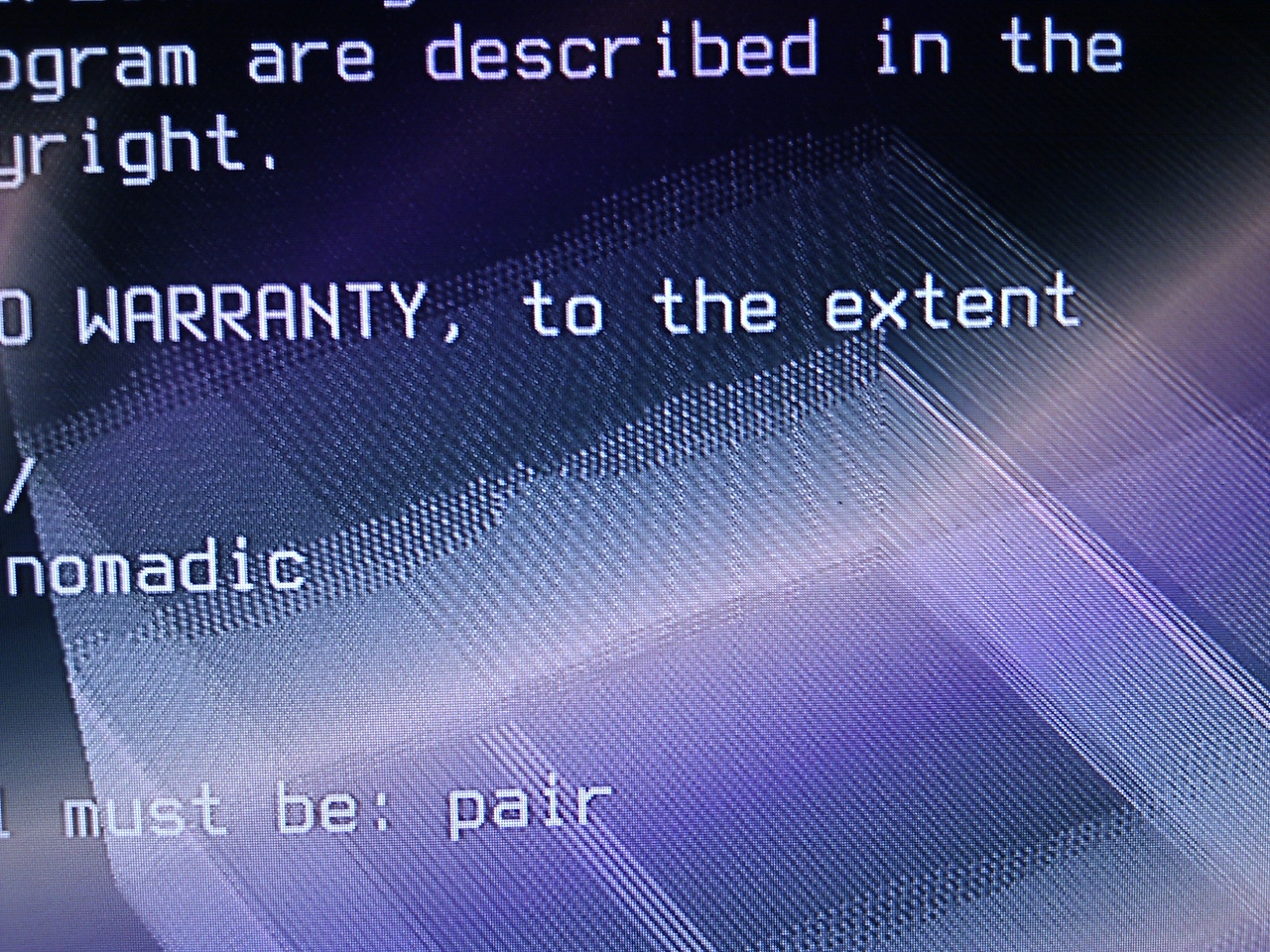 The code is here (bit of a mess, I’m in the process of cleaning it all up). You can build in the jni folder by calling “scons TARGET=RPI”. This is another attempt – looks like my objects are inside out: 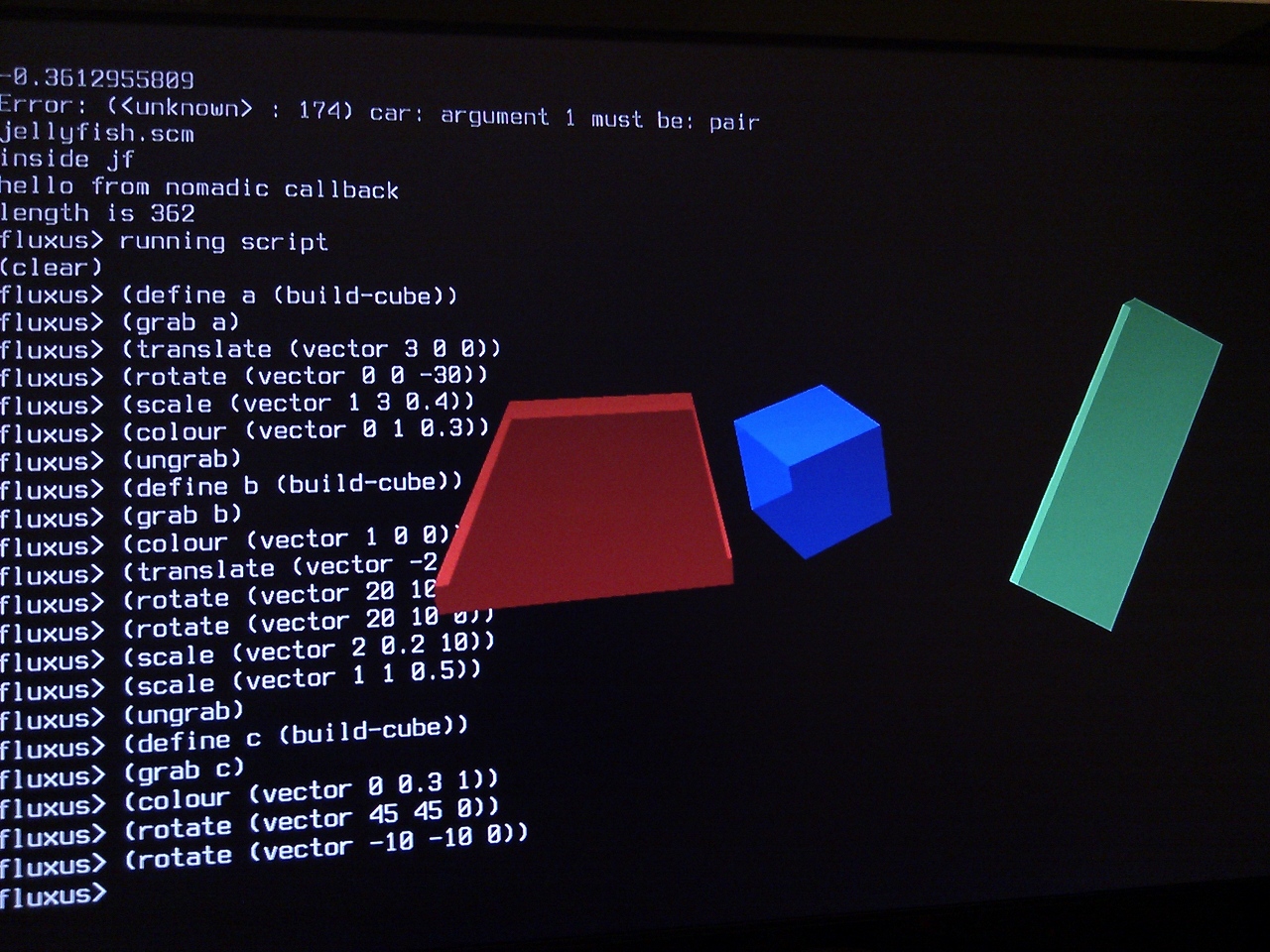 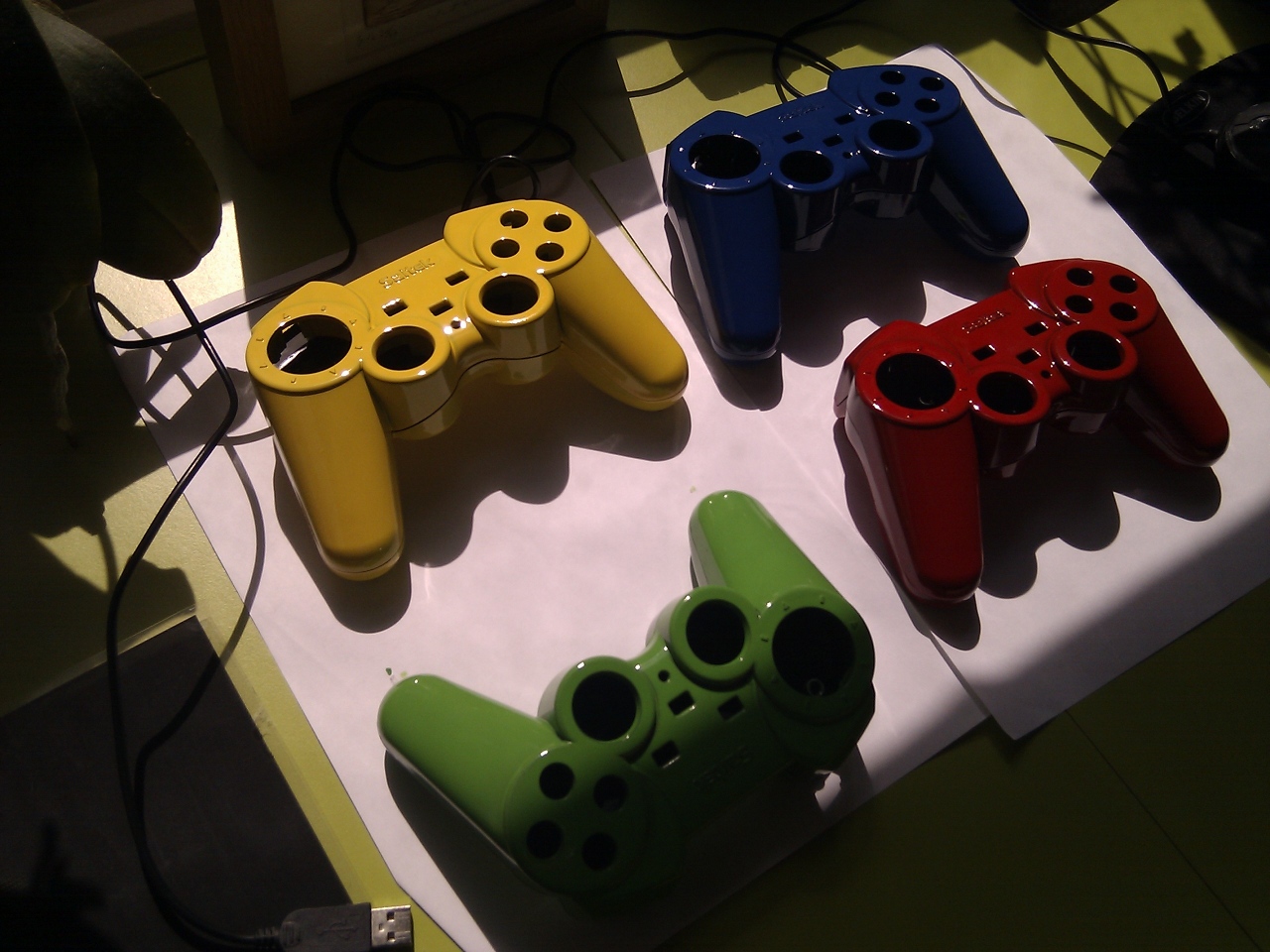 I’m swatting up on my scratch skills for the first codeclub at Troon Primary School in Cambourne tomorrow afternoon! It’s exciting to finally head to the frontlines of algorithmic literacy in education. 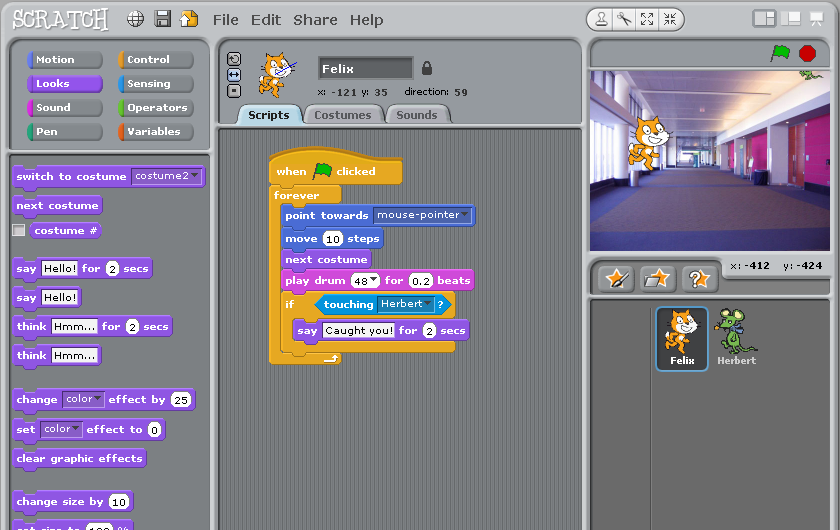 Also on Wednesday I present at talk about FoAM and cross-disciplinary working at Exeter University’s Biomedical Informatics Hub, I’ll be talking about Borrowed Scenery, The Lobster DorisMap, Hapstar and Lirec, specifically concentrating on things that happen when people work together across many disciplines.