Dagstuhl seminars are week long free form meetings between different disciplines centred around computer science. The location is a specially designed complex in the German countryside, and activities include long walks in the surrounding hills, a well equipped and beautiful music room and a well stocked wine cellar.

Our seminar was called ‘Collaboration and learning through live coding’, organised by Alan Blackwell, Alex McLean, James Noble and Julian Rohrhuber and included people from the fields of Software Engineering, Computer Science Education as well as plenty of practising livecoders and multidisciplinary researchers. 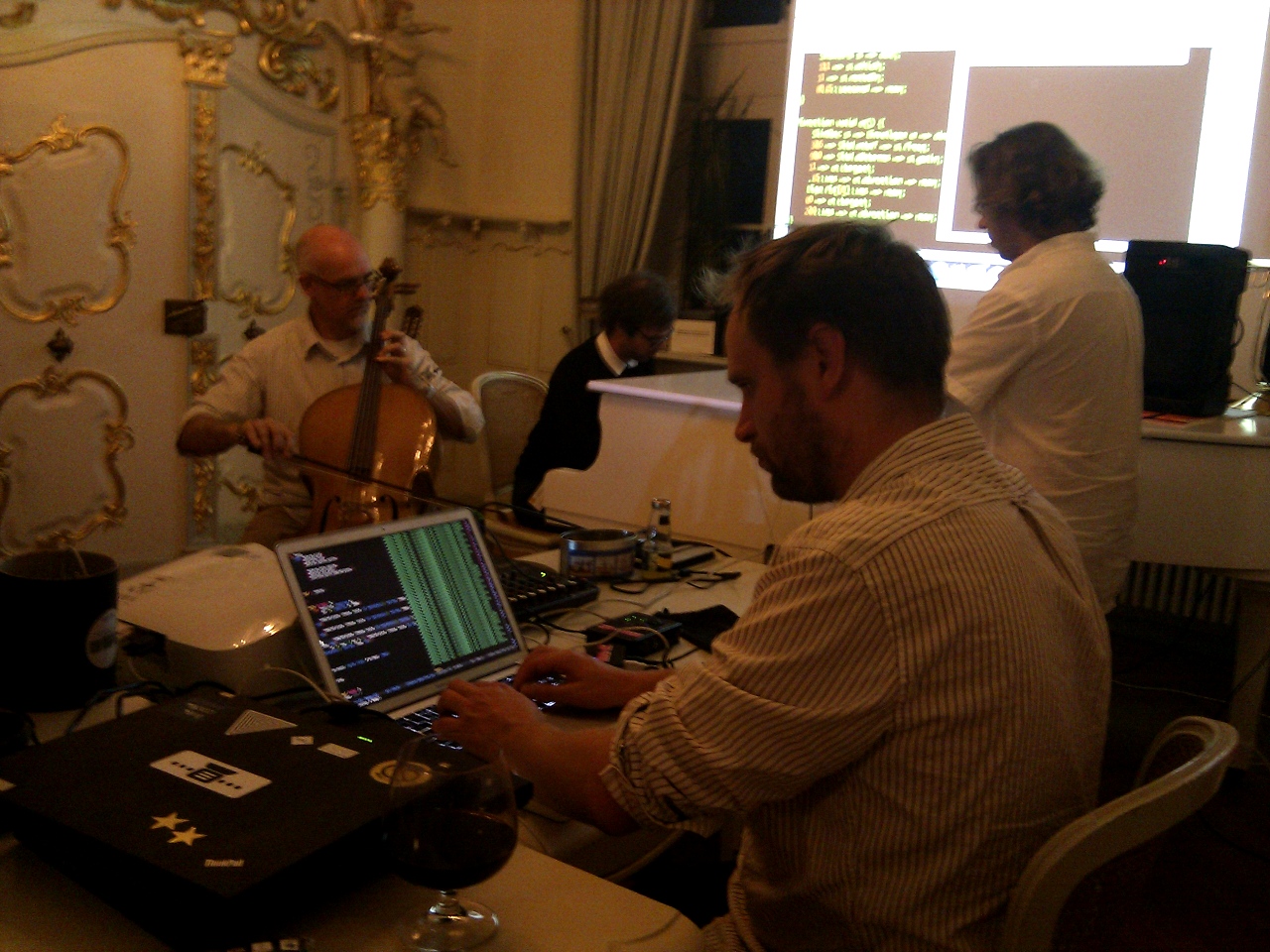 Discussion was wide ranging and intense at times, and the first job was to sufficiently explain what livecoding actually was – which turned out to require performances in different settings:

1. Explanatory demo style livecoding: talking through it as you do it.
2. Meeting room coffee break gigs: with a closely attentive audience.
3. The music room: relaxed evening events with beer and wine.

So Dagstuhl’s music room was immediately useful in providing a more ‘normal’ livecoding situation. It was of course more stressful than usual, knowing that you were being critically appraised in this way by world experts in related fields! However it paid off hugely as we had some wonderful interpretations from these different viewpoints.

One of the most important for me was the framing of livecoding in terms of the roots of software engineering. Robert Biddle, Professor of Human-Computer Interaction at Carleton University put it into context for us. In 1968 NATO held a ‘Software Components Conference’ in order to tackle a perceived gap in programming expertise with the Soviet Union. 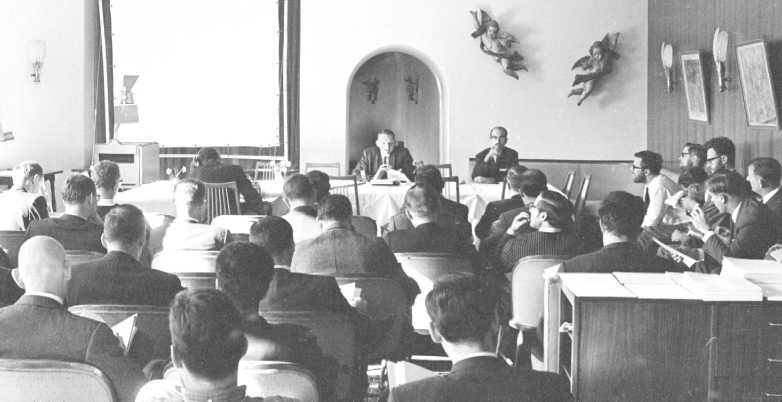 This conference (attended my many of the ‘big names’ of programming in later years) led to many patterns of thought that pervade the design of computers and software – a tendency for deeply hierarchical command structures in order to keep control of the arising complexity, and a distrust of more adhoc solutions or any hint of making things up as we go along. In more recent times we can see a fight against this in the rise of Agile programming methodologies, and it was interesting to look at livecoding as a part of this story too. For example it provides a way to accept and demonstrate the ‘power to think and feel’ that programming give us as humans. The big question is accessibility, in a ubiquitously computational world – how can this reach wider groups of people? 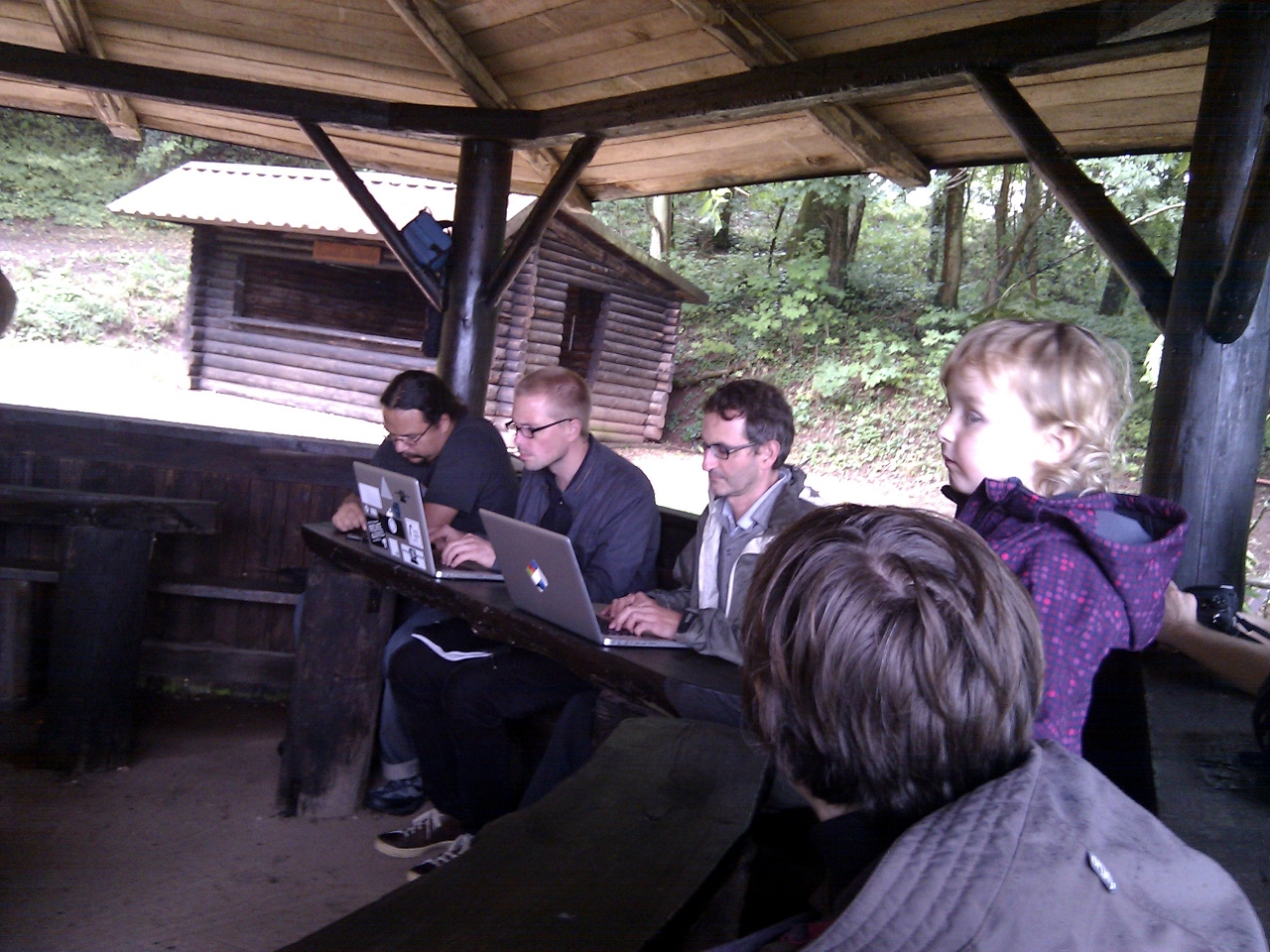 Ellen Harlizius-KlÃ¼ck works with three different domains simultaneously – investigating the history of mathematics via weaving in ancient Greece. Her work includes livecoding, using weaving as a performance tool – demonstrating the algorithmic potential of looms and combinations of patterns. Her work exposes the hidden shared history of textiles and computation, and this made a lot of sense to me as at the lowest level the operations of computers are not singular 0’s and 1’s as is often talked about, but actually in terms of transformations of whole patterns of bits.

Mark Guzdial was examining livecoding through the lens of education, specifically teaching computer science. The fact that so many of us involved in the field are also teaching in schools – and already looking at ways of bringing livecoding into this area, is noteworthy, as is the educational potential of doing livecoding in nightclub type environments. Although here it works more on the level of showing people that humans make code, it’s not a matter of pure mathematical black boxes – that can be the ground breaking realisation for a lot of people. 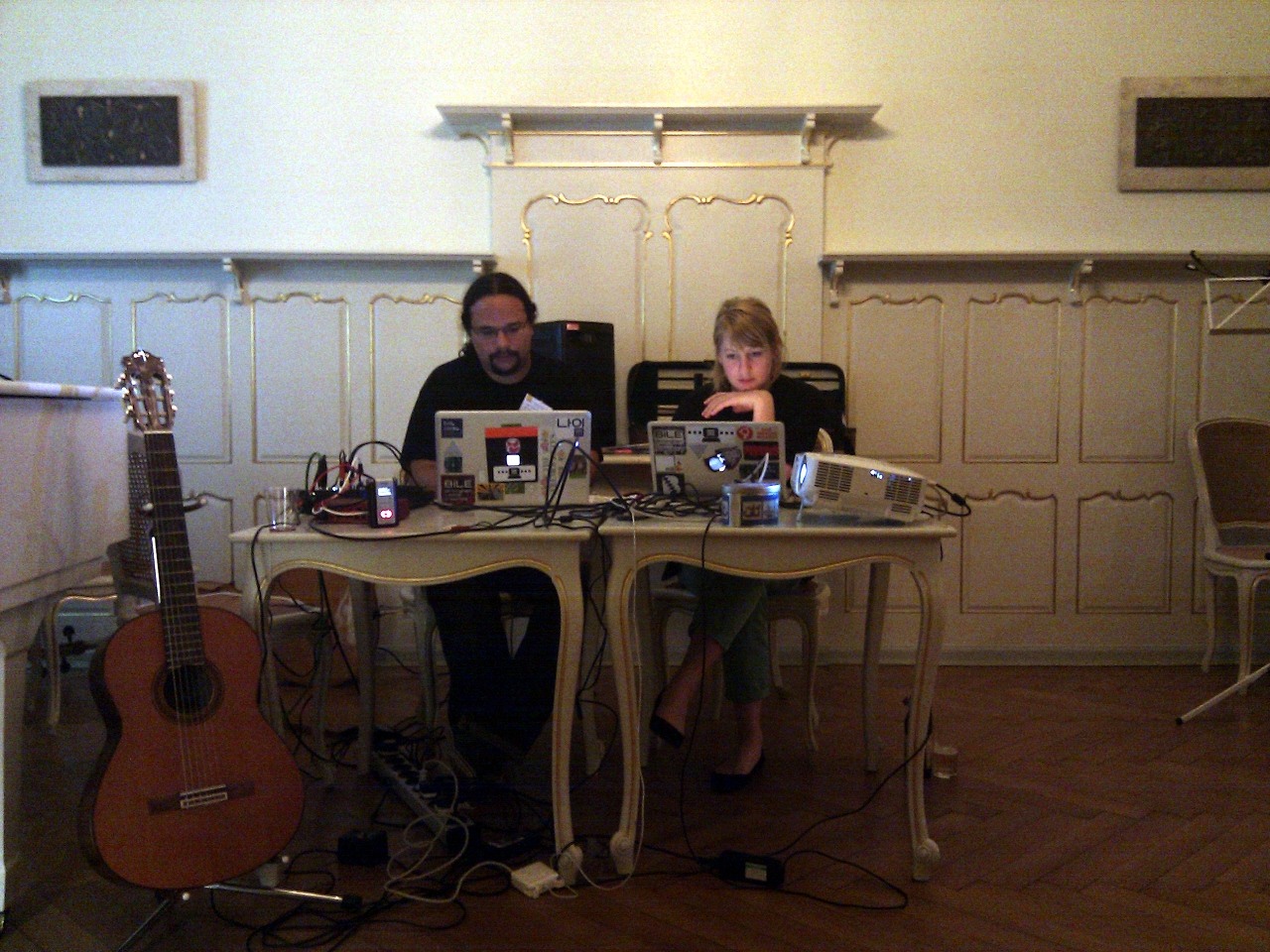 Something that was interesting to me was to concentrate on livecoding as a specifically musical practice (rather than also a visual one) as there are many things about perceiving the process with a different sense from your description of it that are important. Julian Rohrhuber pointed out that “you can use sound in order to hear what you are doing” – the sound is the temporal execution of the code – and can be a close representation of what the computer is actually doing. This time based approach is also part of livecoding working against the notion that producing an ‘end result’ is important, Juan A. Romero said that “if you’re livecoding, you’re not just coding the final note” – i.e. the process of coding is the artform. 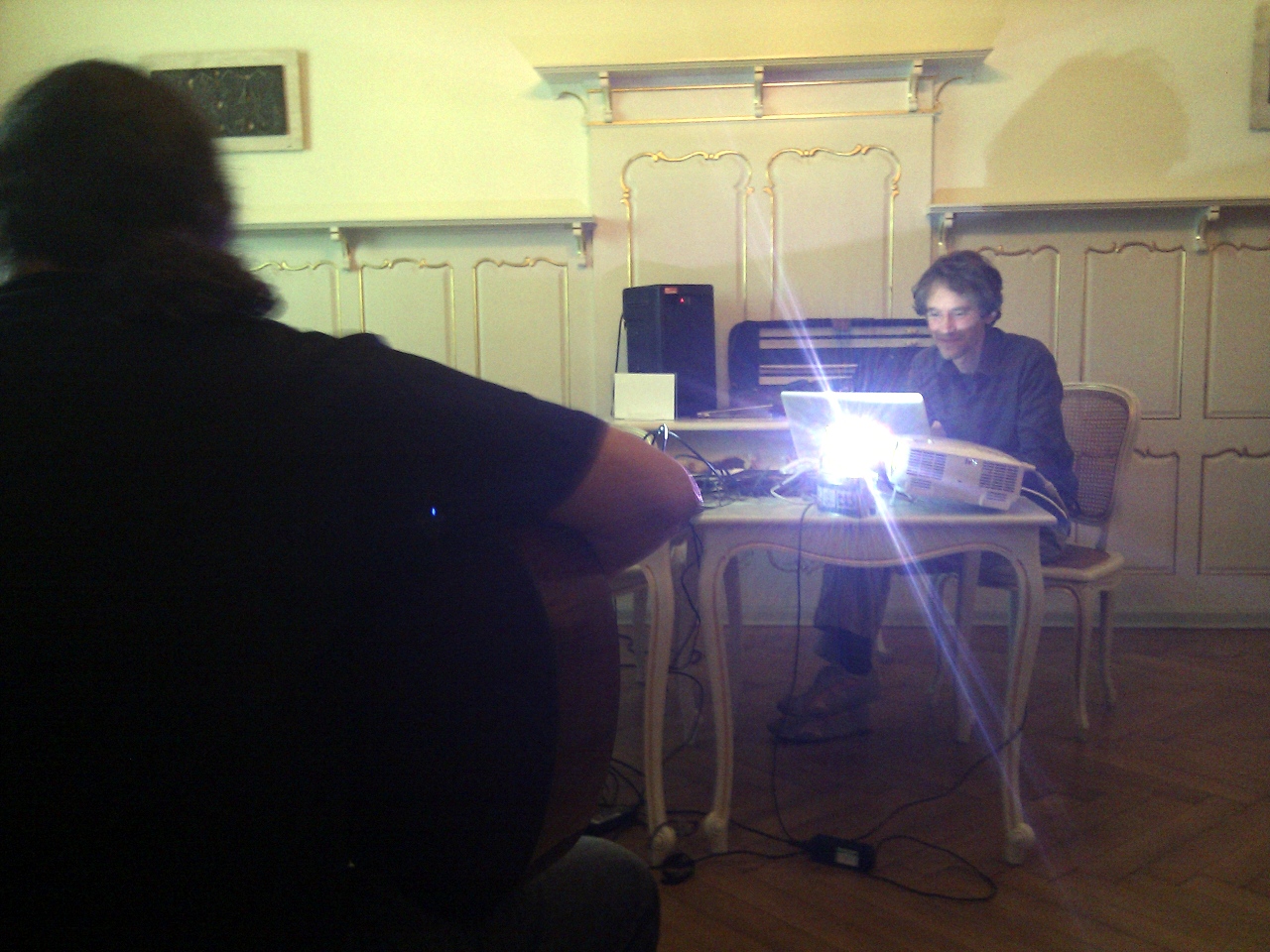 In terms of a school teaching situation sound is also powerful, as described by Sam Aaron, livecoder and creator of Sonic Pi. A child getting a music program to work for the first time in a classroom is immediately obvious to everyone else – as it is broadcast as sound, inspiring a bit of competition and ending up with a naturally collaborative learning experience.

It’s impossible to cover all the discussions that we had, these are just the ones I happened to get down in my notebook, but it was a great opportunity to examine what livecoding is about now in relation to other practices, where it came from and where it might go in the future. 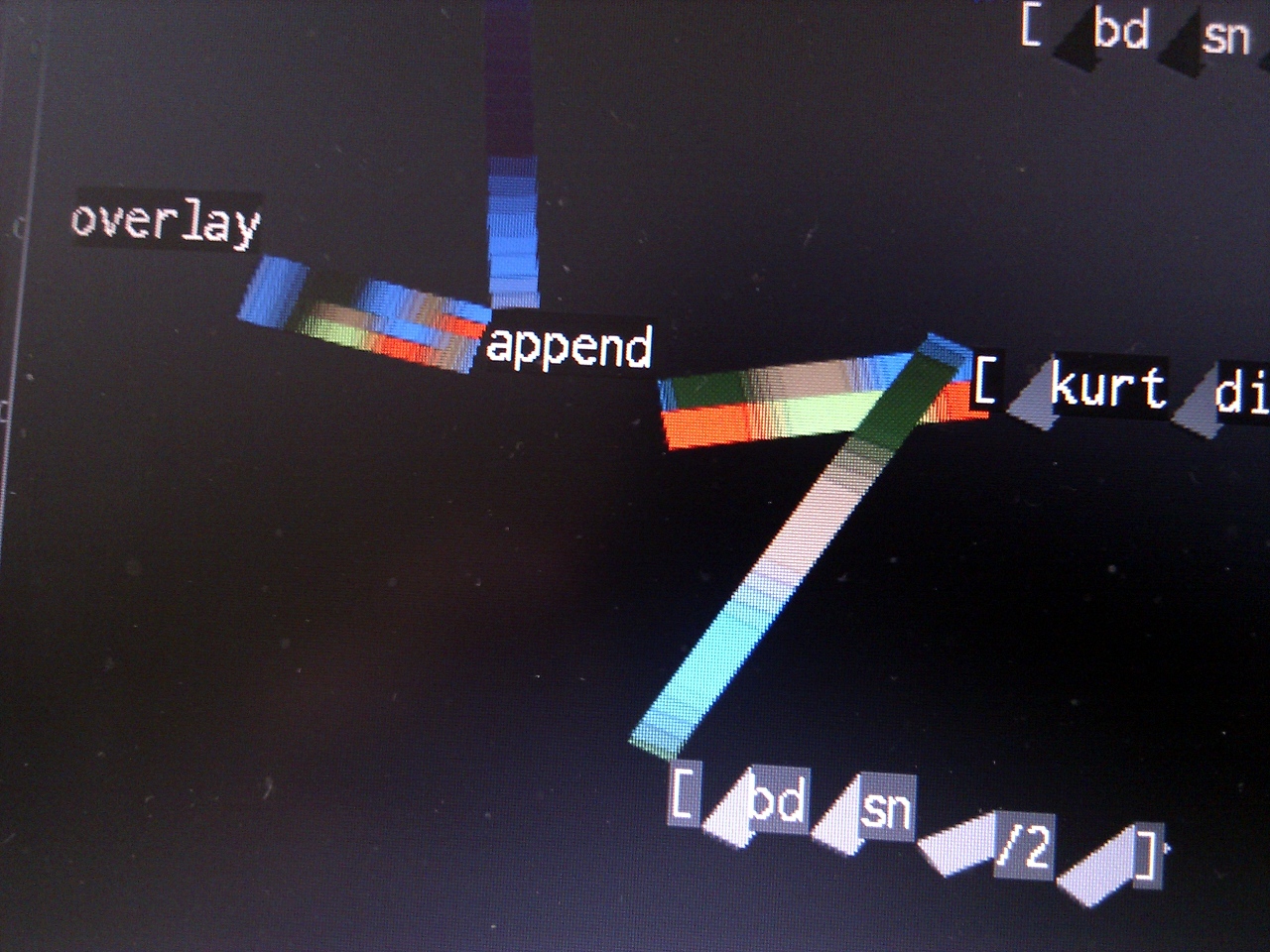 I’ve finally had a chance to sit down and comment on John Naughton’s article in the Guardian and it’s manifesto addressed to the education secretary The Rt Hon Michael Gove MP on computer education in the UK. This joins an avalanche of recognition that programming – or “coding” – is suddenly a Good Thing for People To Know.

It is wonderful to read a major media publication pouring scorn on the old idea that “computers are like cars”, “users are drivers” which has dogged perceptions of computers for years. There is a new philosophy here focusing on hacking, in the original sense – an algorithmic literacy of processes which now mediate every aspect of our lives. This is seen as good as a general life skill, and of course good for the economy for encouraging the kind of independent thinking needed for successful startup companies.

This avalanche has to be credited to some extent to game designer David Braben and his Raspberry Pi project, and an extensive PR campaign tweaking people’s memories (including an increasing number of politicians in their 30’s and 40’s) who remember school computers like the BBC micro, and their later influence on what these same politicians like to call the “creative industries”. This of course all seems instinctively good sense for those of us who have been closely watching the boom in popularity of arduino, processing and free software methodologies in hacklabs and fablabs.

However, an approach organised on this scale is unlikely to support such generalist and creative philosophies we are used to. A few days prior to this article we had an announcement of Â£575m for kitting out schools with computing infrastructure from familiar public sector contractors including Serco and Capita, and a bit more detail on Staffordshire county council who are spending Â£28m on “Apple products under the iOS lot including iMacs, Mac Books, iPods, iPads, Mac Minis and Lion Server.”

The problem here is that a rejection of “users as drivers” is a rejection of iOS (and to a lesser extent Android) and the app store philosophy. App stores are extremely successful at promoting the idea of phones as appliances (never computers in their own right) and software as small digestible “apps” encapsulated in locked down environments generally marketed as a kind of protection for users. If these models of computing are to grow as expected – they are completely at odds with an accessible understanding we need for this change in education approach, and the creative literacy of algorithms which would follow.

When I’ve interviewed graduates for creative programming jobs the thing which is really most valuable (much more so than knowing the relevant programming language) is exactly the thing that having an “edit source code” button on every app would encourage (as included on OLPC’s sugar, another older example of an education targeted effort). What is needed is a creative lack of respect for software, a cheerful abandonment of the fear that “breaking something” will be your fault rather than that of the system.