Last week I posted the big graph of problems based on feedback from the Falmouth Loading Bar focus test. I went through each area building up a list of possible solutions – the general idea being to find solutions that might solve more than one problem at a time.

I now have quite a reasonable todo list for another code sprint. Hopefully there will be some new things implemented, based on this – we will see how it goes.

Here is an image of a mass of feedback post-its neatly arranged into lines: 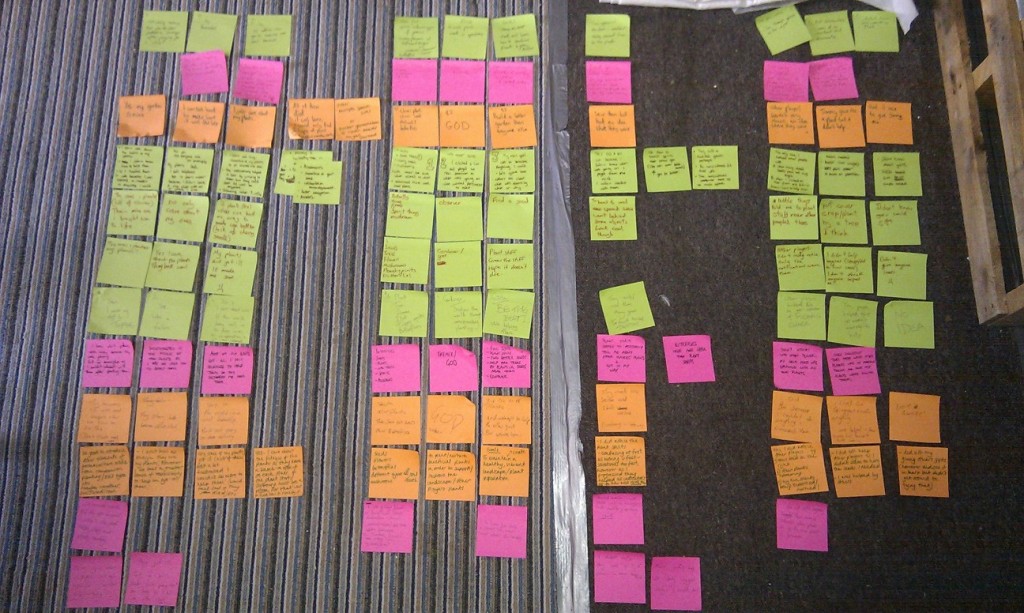 During the Germination X focus test I asked the participants a set of questions in 4 areas based on work we had done at SICS mobile life in Stockholm. This was useful as although there was a lot of information (and a load more free form feedback after the questions) – at least there was a structure to help understand it later.

Despite the glowing words of the post-event review, the important thing is to look at all of the criticisms from the post-it notes to create an depressing “graph of badness” – in order to pinpoint the areas needing urgent attention.

The main problems with the general game world seem to be a lack of distinction between the different elements – telling the fruit/seeds apart from the plants, how did the plant spirits relate to things. One tester found it very difficult to get plants to react to what they were doing, and therefore got very frustrated.

Perhaps the most unusual, and certainly the most challenging aspect of the game, the plant spirits caused a lot of negative feedback. Some testers felt that they were random, and even aimless – zooming around and popping in and out of existence from player to player. The FAtiMA fixes had also caused them to over react to so many people playing at once – so they were moving too fast for people to even read their messages.

Even when they were understood, a well meaning but disastrous last minute ‘tweak’ made them ask people to help other players by planting plants they couldn’t pick yet, which lead people to think they were taunting them!

This prevented most players from interpreting any useful meanings from their actions (a lot ignoring them). It was only later when people went back to playing in a less intensive way (which I was pleased that a lot did over the following days) that they were reacting more normally.

The main problems flagged up when asked about their relationship with other players was the lack of a visible physical presence – no avatars. Other player’s actions were noticed quite strongly, but only indirectly – and not entirely helpfully. The lack of a map or overall view came up here too. Although the gifting mechanic was added to the tutorial only a couple of players tried it out, the others either didn’t notice it or forgot to try it.

The problems of ownership were related mainly to the problems with the game world, differentiation between elements – also some players didn’t notice the “glow” around their plants (which isn’t in the tutorial). More interestingly, some players found that being restricted to a single action – “planting” with no follow up meant they didn’t care as much about their plants as they could.

Predictably perhaps, this was also an area with a noticeable differences between the gamers and non-gamers, the ones more used to gaming felt their role was to “create the best garden” while the others tended to feel that they should be “helping each other to create a balanced world”.

The next Germination X post will be about solutions to some of these problems!