One of the potential future additions to our tangible programming hardware is haptic feedback, using sound/vibration to provide a extra channel of information through your fingers when programming with tangible blocks. We wanted to test this before designing the PCB hardware in case we could add it to the system simply – this was initiated by watching a reverse engineering video on youtube (I think by bigclivedotcom) where a technique was mentioned for sneakily reusing input lines (of which we have hundreds) as outputs when they are not being read, by using diodes to separate the signals. 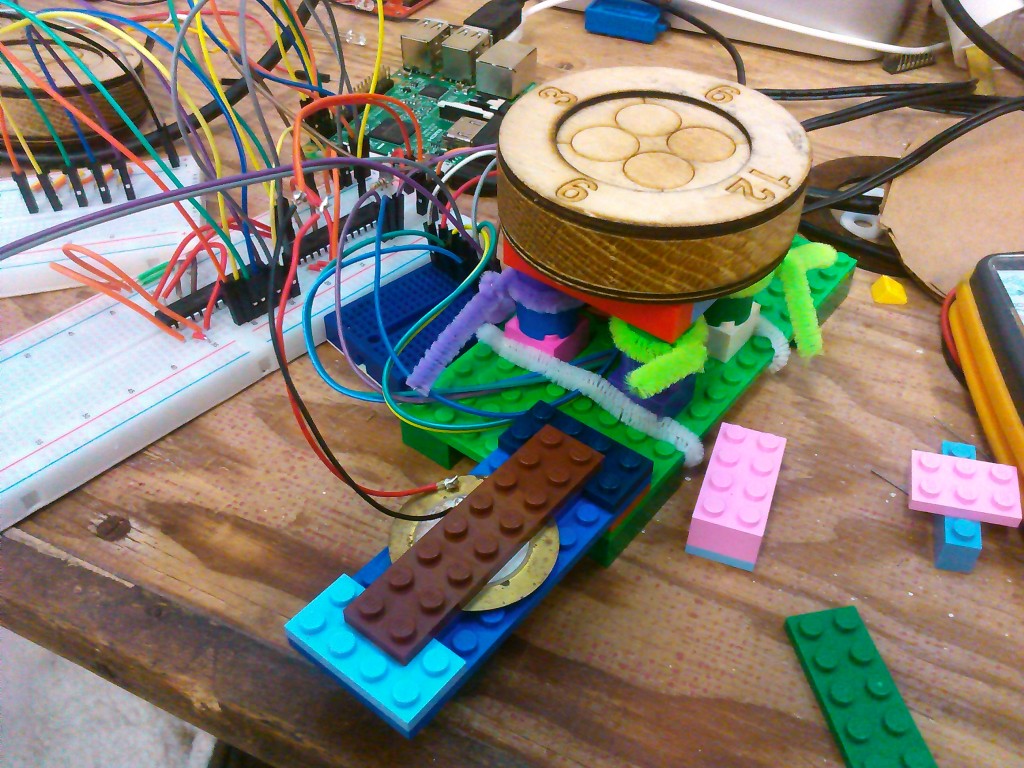 Piezo transducers are often used as cheap speakers, and they can also provide some touch feedback by using lower frequencies. We tested one to see if it interfered with the magnetic fields, and the diaphragm doesn’t seem to be ferrous metal (I’m not actually sure what it is made from) so it can be placed right over the sensors with no effect. A bit more Lego to attach it to the prototype sensor unit, and to see we can feel it through the tangible block when it’s touching the sensor.

The first attempt consisted of simply plugging a speaker into the i/o line from the MCP23017 port expander, switching between input and output on the Pi and adding a diode to prevent the output voltage getting to the sensor. 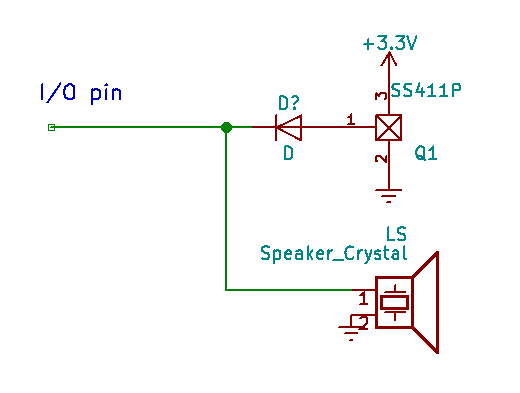 The problem is all the circuits we’re using run on 3.3V, but the piezo speaker I’m using is rated up to 20V – so it’s just not strong enough to feel it. The Pi also provides 5V pins, so a second attempt to use a simple driver circuit (single transistor common emitter amplifier) to boost the voltage: 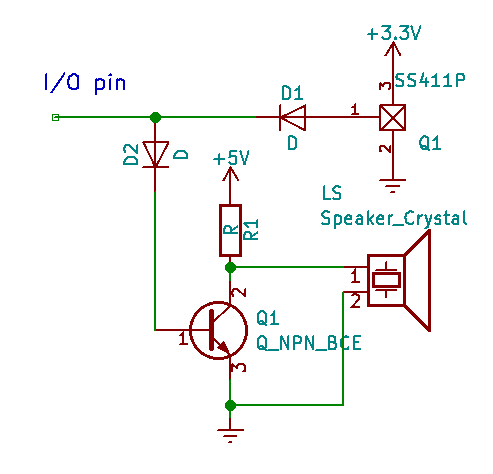 You can hear this version in the video above – it’s playing a sound using a frequency crudely determined by the 4 bit value the block orientation represents whenever it changes. This is louder (loud enough at least to make a recording) but still not enough to feel easily, even when you put the piezo between the sensor and the block. So it seems the best way to get this to work properly will be via a separate circuit, not something we can slot into the existing input hardware. Another advantage of doing it separately is that we can treat it more like a multichannel audio setup with a dedicated processor that is not interrupted by the sensor reading. One solution I saw was to use the same H bridges as used to drive motors from microcontrollers as these take much higher voltages – this will be something to try later on.