In order to design the next version of the flotsam hardware I need to make it cheaper and easier to build. The existing hardware was very cheap in terms of components but expensive in terms of time it took to construct! With this lesson learned and with a commission on the horizon I need to find a simpler and more flexible approach to communication between custom hardware and the Raspberry Pi – mainly one that doesn’t require so many wires.

i2c is a serial communication standard used by all kinds of components from sensors to LCD displays. The Raspberry Pi comes with it built in, as the Linux kernel supports it along with various tools for debugging. I also have some Atmel processors from a previous project and there is quite a bit of example code for them. I thought I would post a little account of my troubleshooting on this for others that follow the same path, as I feel there is a lot of undocumented knowledge surrounding these slightly esoteric electronics.

The basic idea of i2c is that you can pass data between a large number of independent components using only two wires to connect them all. One is for data, the other is for a clock signal used for synchronisation.

I started off with the attiny85 processor, mainly as it was the first one I found, along with this very nice and clear library. I immediately ran into a couple of problems, one was that while it has support for serial communication built in (USI) you have to implement i2c on top of this so your code needs to do a lot more. The second was with only 8 pins the attiny85 is not great for debugging. I enabled i2c on the Raspberry Pi and hooked it up, ran i2cdetect – no joy. After a lot of fiddling around with pull up resistors and changing voltages between 3 and 5v either no devices were detected, or all of them were, all reads returning 0 (presumably logic pulled high for everything) or noise – nothing seemed to make any difference.

After a while (and trying other i2c slave libraries to no avail) I switched to an atmega328 processor using this library which includes a Makefile! One thing that I’ve noticed that would make things much easier for learning this stuff is more complete toolchains in example code including the right #defines and fuse settings for the processor. However this code didn’t work either at first, and my attempts at using debugging LEDs on PORTB didn’t work until I figured out it was conflicting with the UART i/o used in the example code – after figuring out that this wasn’t part of the i2c code I removed it and the Raspberry Pi could at last see the device with i2cdetect. With the addition of some LEDS I could check that bytes being sent were correctly being written to the internal buffer at the correct addresses.

Reading was another matter however. Most of the time i2cget on the Pi failed, and when it did work it only returned 0x65 no matter what the parameters. I’d already read extensively about the Raspberry Pi’s i2c clock stretching bug and applied various fixes which didn’t seem to make any difference. What did the trick was to remove the clock divide on the atmega’s fuses – by default it runs at 8Mhz but slows the instruction cycles to 1Mhz – without that it could keep up with the Pi’s implementation and all reads were successful. I still had to solve the ‘0x65 problem’, and went into the i2c code to try and figure out what was going on (using 8 LEDs to display the i2c status register). It seems like reading single bytes one at a time is done by issuing a TW_ST_DATA_NACK as opposed to TW_ST_DATA_ACK, as it sends a not-acknowledged for the last byte read. This state is not supported by the library, after fiddling around with it a bit I switched over on the Pi’s side to using the python smbus library, and tried using read_i2c_block_data – which reads 32 bytes at a time. The first byte is still 0x65 (101 in decimal, in the photo above) – but the rest are correct, I’ll need to read a bit more on the i2c protocol to figure that one out (and get the attiny working eventually), but at least it’s enough for what I need now.

Following on from the last in this mini series, the giant 16 byte multiplexer is finished and tested – lots of head scratching due to shorts and wonky solder joints (it’s amazing how sensitive CMOS logic is, interference on accidental free pins causes strange effects) and I’ve replaced the breadboard with a new interface board between the Pi and the multiplexer. 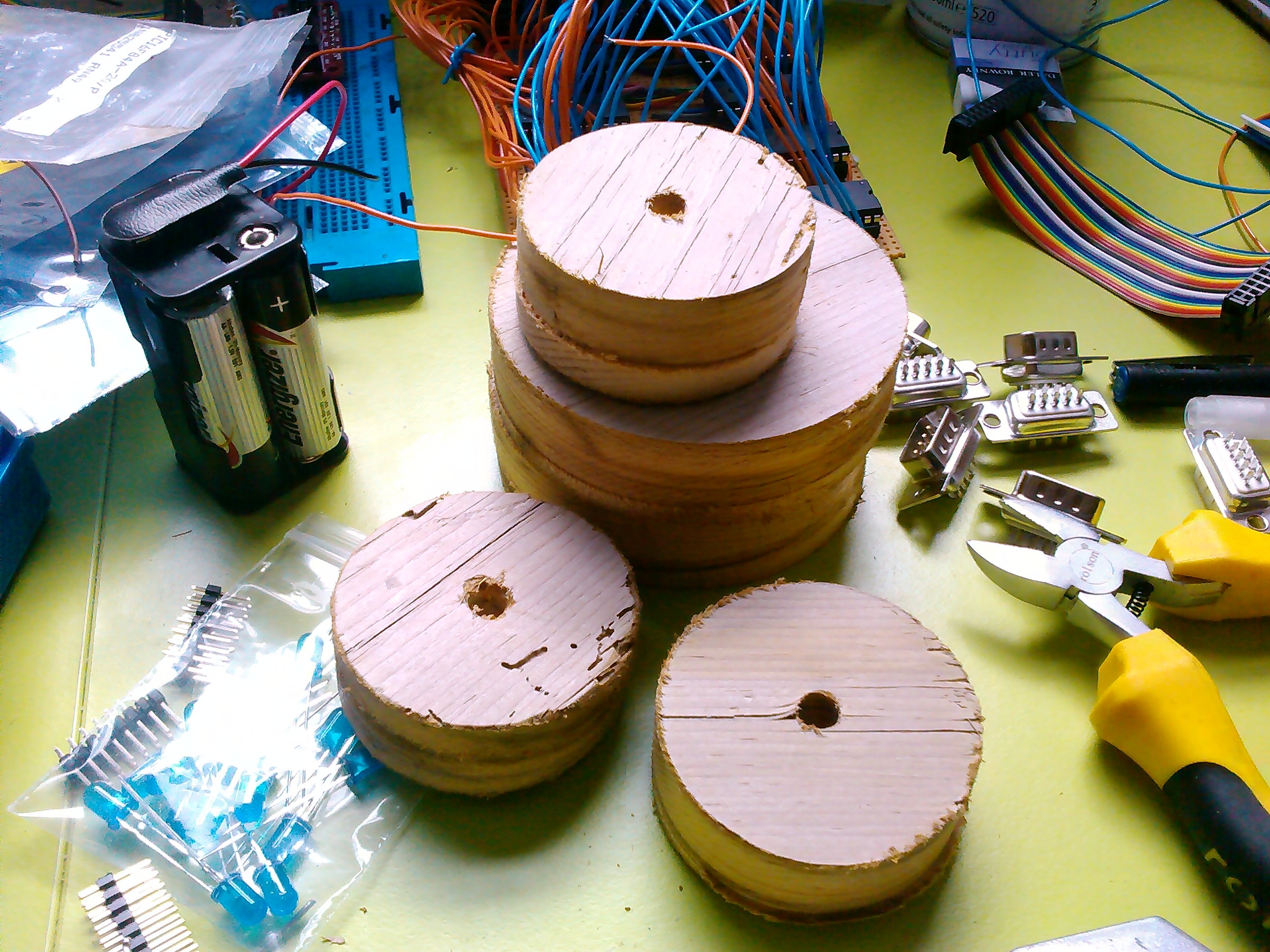 Now it’s time to think more about the ‘front end’ – here are some prototype programming blocks made from the ‘holes’ from a hole saw (I’m chopping up bits of driftwood). These include a central drill hole, which we can use for an indicator LED. 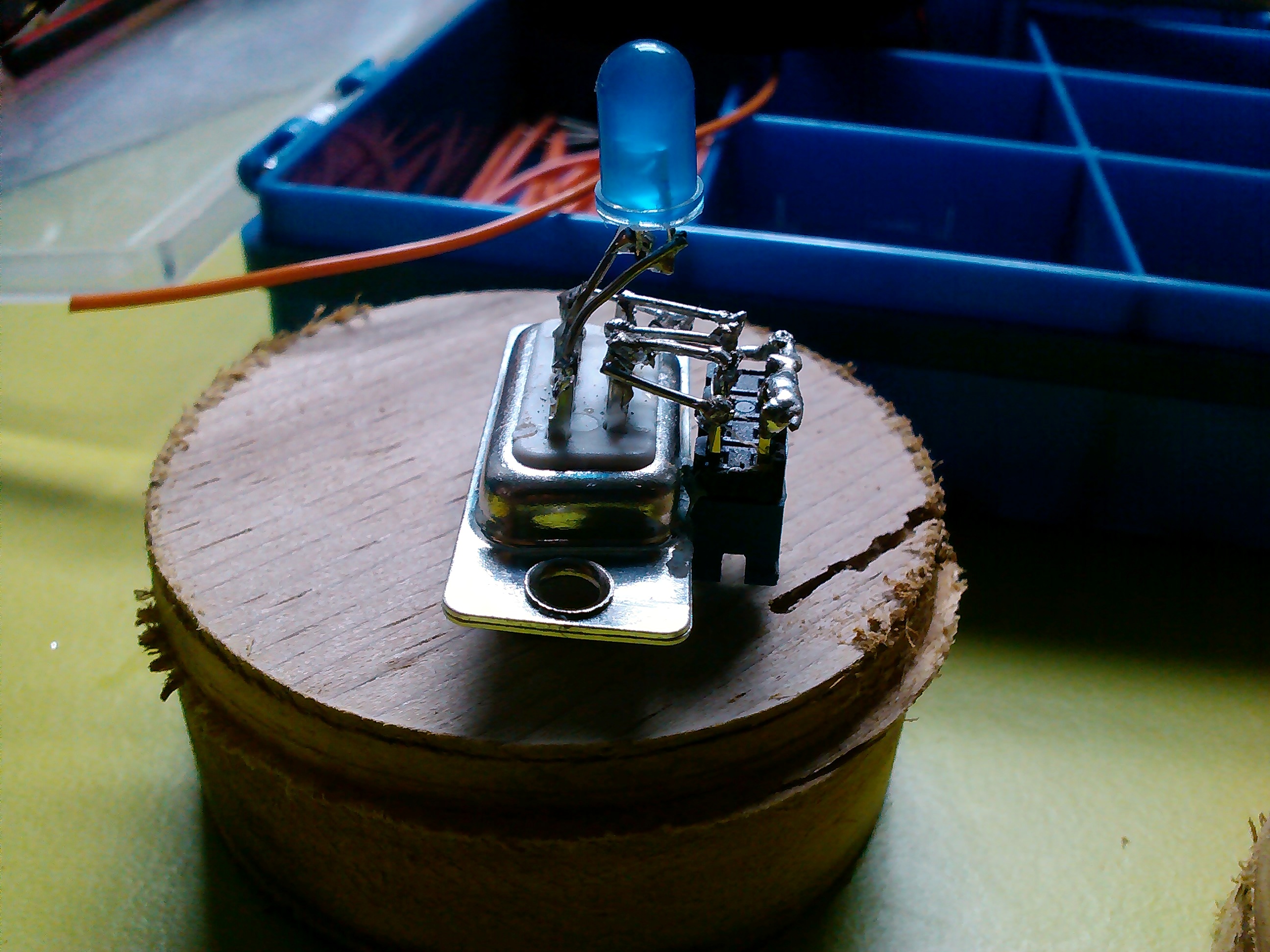 This is the minimal circuitry needed for each programming block – it’s just a 4 bit identification code (reconfigurable via jumpers) and the LED, mounted around the 7 pin VGA style plug. 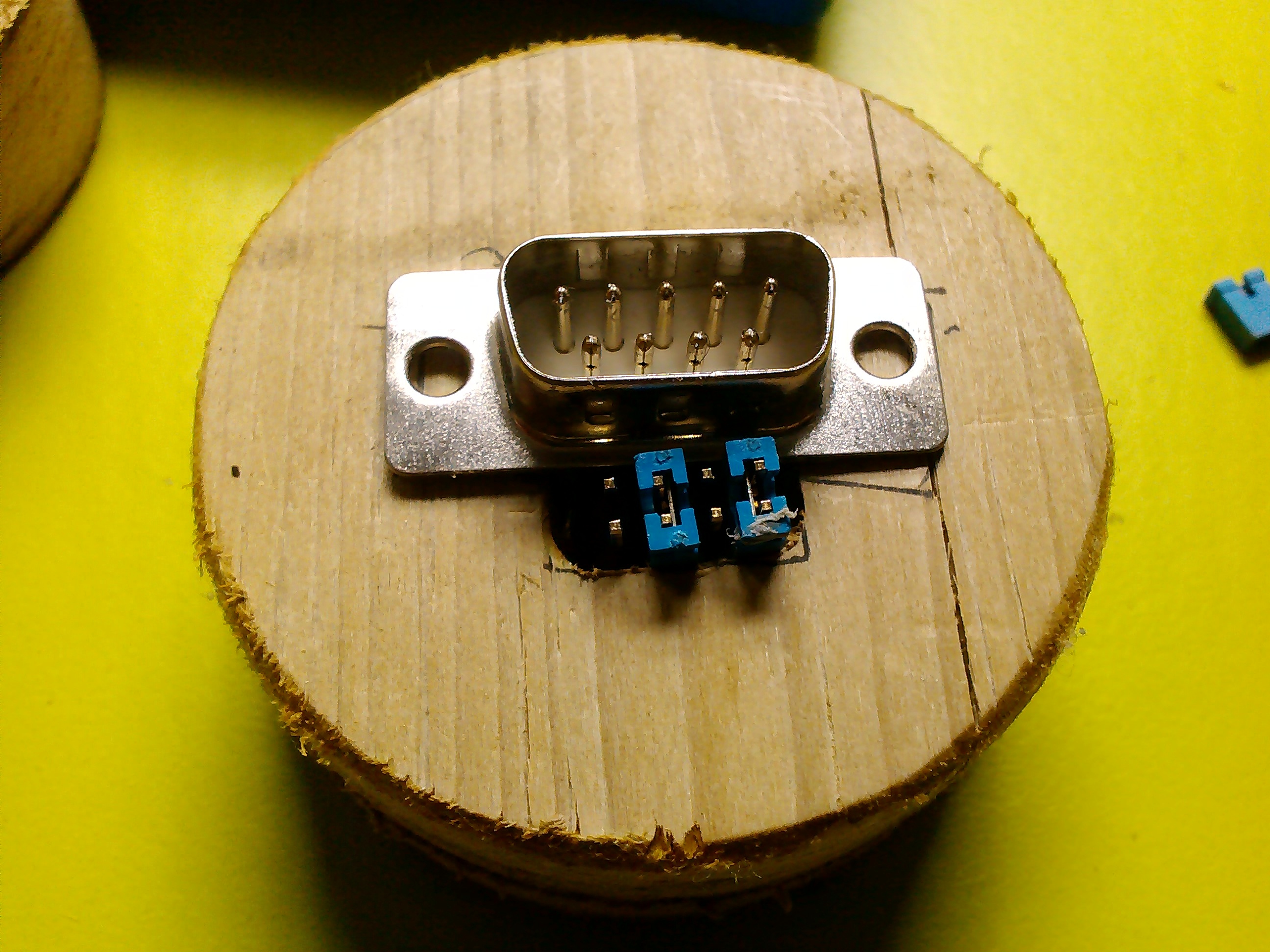 Here it’s mounted in the block after a bit of hollowing out. To be fully kid-proof I’ll probably eventually set the internals in epoxy glue. 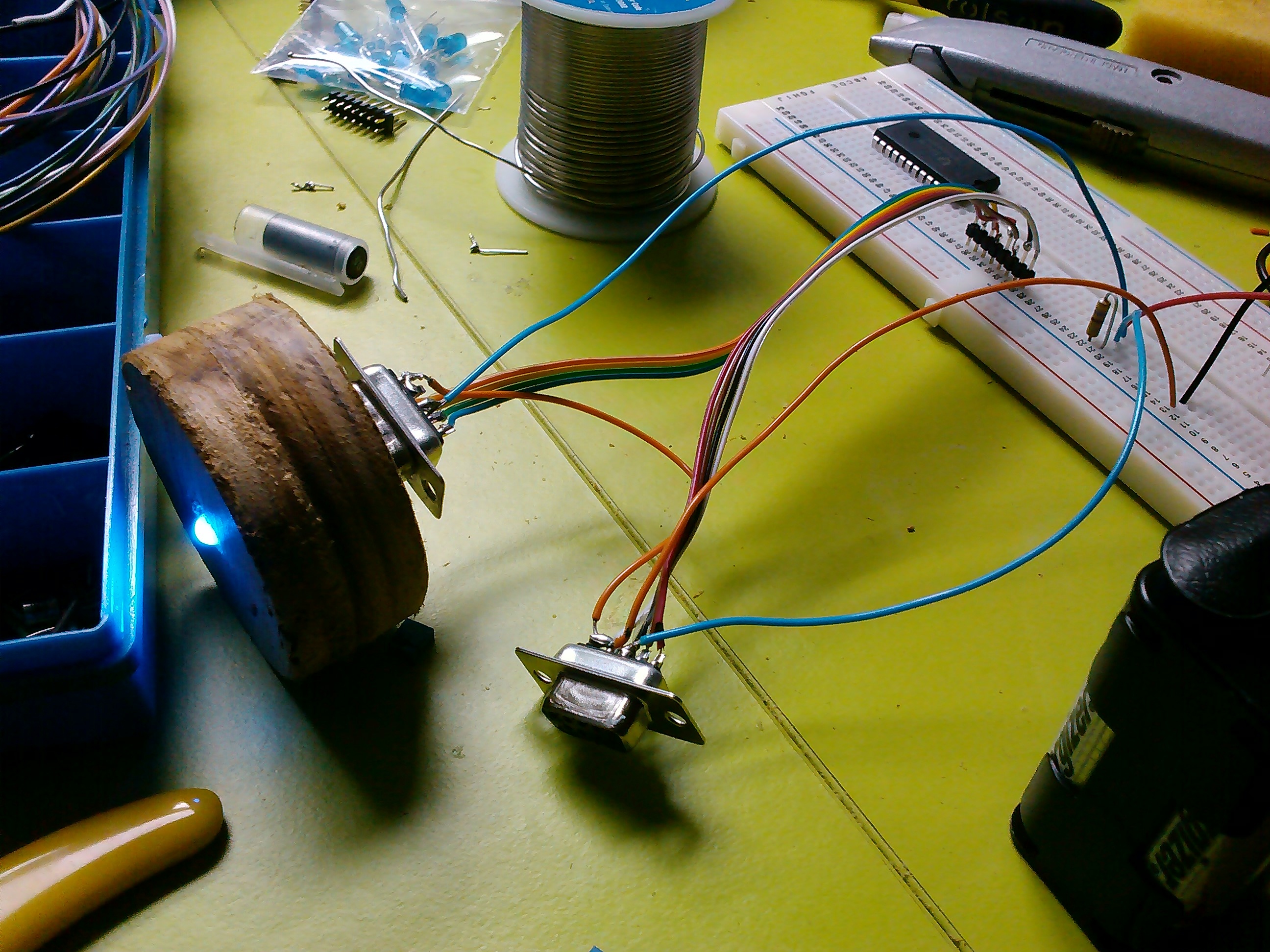 Testing the plug/socket wiring on the breadboard. The plan is to paint the top surface of the programming block in blackboard paint so different instructions and languages can be tested and built with the same blocks. It also intriguingly makes abstraction possible, which is usually a problem with non-text based approaches, but this needs more thinking about. 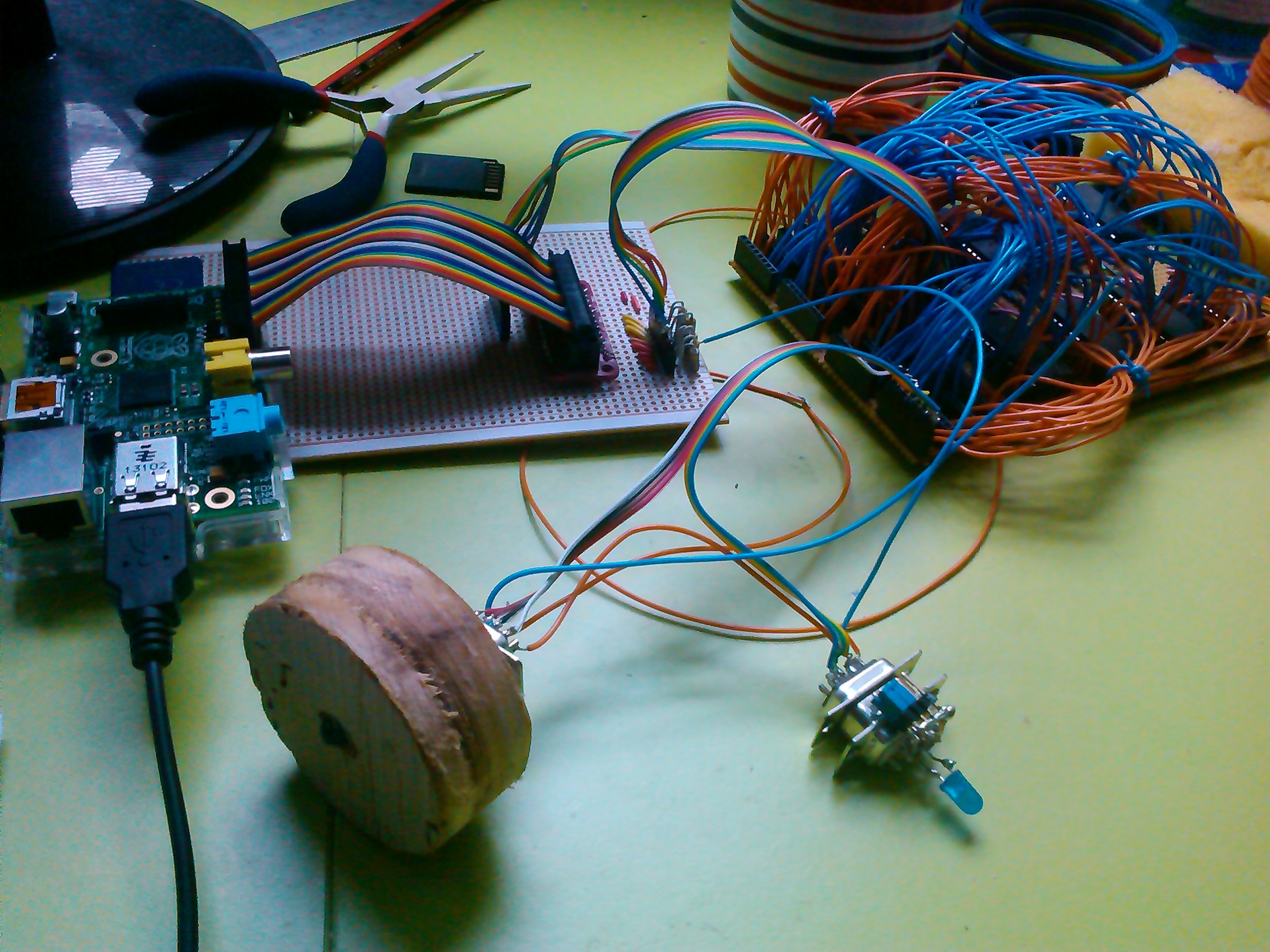 Here it is with another unenclosed block attached to the main board, and via the new interface to the Raspberry Pi. The interface will need a bit more circuitry to drive the LEDs – which will be able to be lit in different ways depending on the needs of the language, perhaps sequential in some cases, more dependant on logic in others. Also, different shaped blocks or different coloured LEDs may have different meanings in a language too. 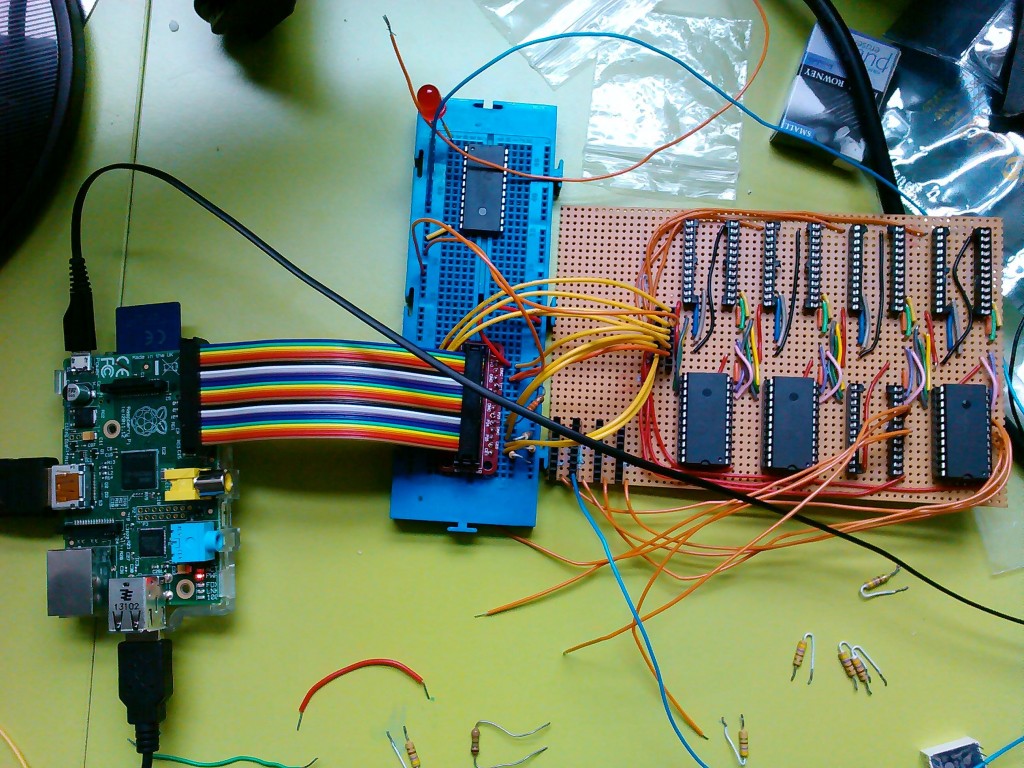 Since the last update I’ve connected the Raspberry Pi to the board, and after a bit of debugging I have a python script that polls bytes (more accurately 4 bit ‘nibbles’) via the GPIO ports from 16 addresses. I didn’t blow up the Pi, although I did cause hard resets a couple of times with wandering connections. Now comes the mega wiring phase.

A bit of hardware hacking for Troon Primary CodeClub, who have tons of old style Lego Mindstorms they don’t use any more, and after a year of Scratch programming on their PCs are just getting started with Raspberry Pi. We’re using this Scratch modification together with the hardware I’m making which is based on this circuit. The main thing here is an L293D Motor Controller IC which can drive 2 DC motors in both directions. You can write the hardware code in Scratch like this to control the lego motors:

The most tricky part in this whole endeavour has been physically connecting to Mindstorms. At the moment I’m having to use crocodile clips which won’t work long in normal classroom conditions – but I’m wary of destroying/modifying the connectors as they’re not made any more… 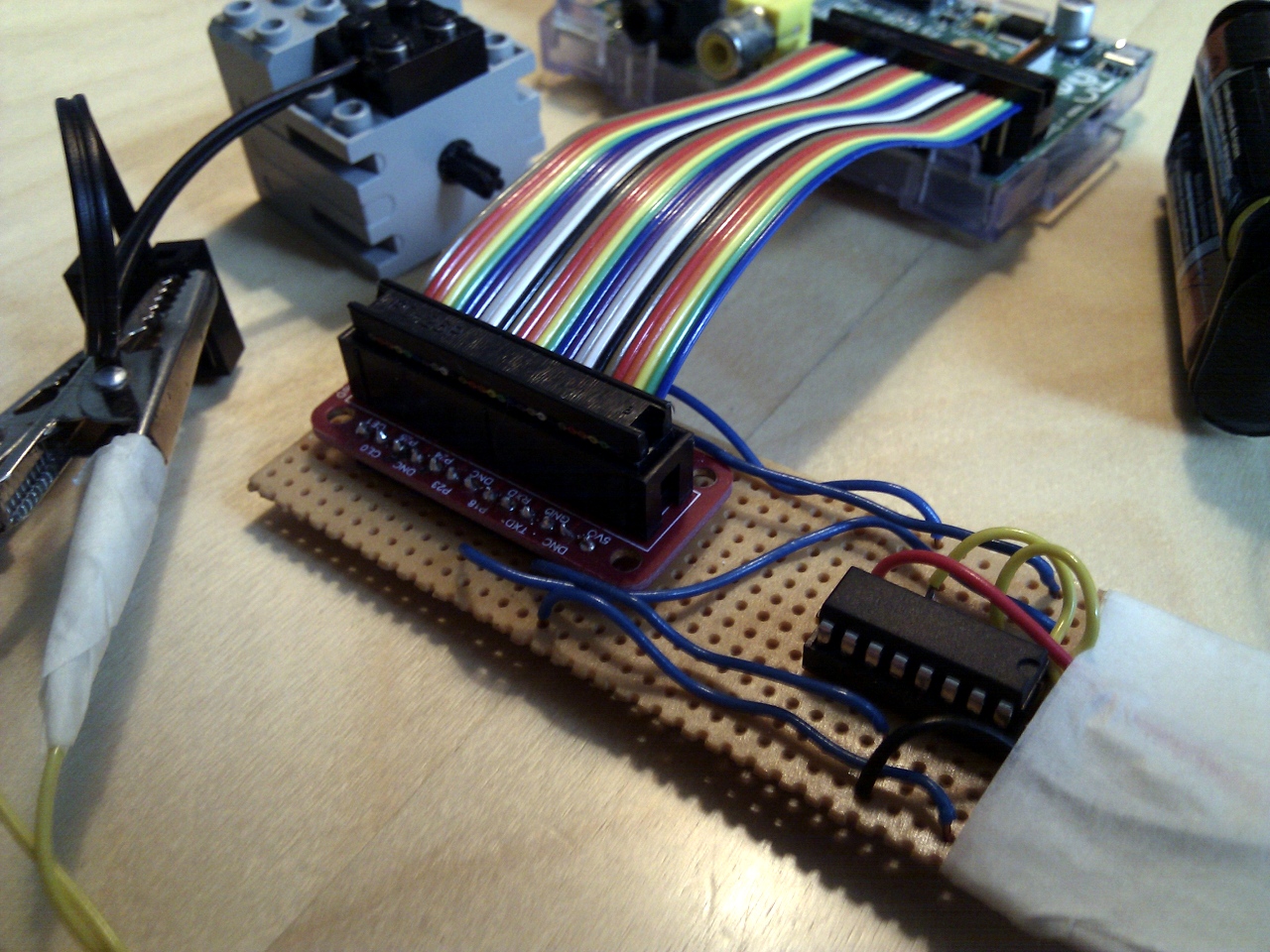