At only around 2 years old, the Mexican livecoding scene is pretty advanced. Here are images of (I think) all of the performances at /*vivo*/ (Simposio Internacional de MÃºsica y CÃ³digo 2012) in Mexico City, which included lots of processing, fluxus, pure data and ATMEL processor bithop along with supercollider and plenty of non-digital techniques too. The from-scratch technique is considered important in Mexico, with most performances using this creative restriction to great effect. My comments below are firmly biased in favour of fluxus, not considering myself knowledgeable enough for thorough examinations of supercollider usage. Also there are probably mistakes and misappropriations – let me know! 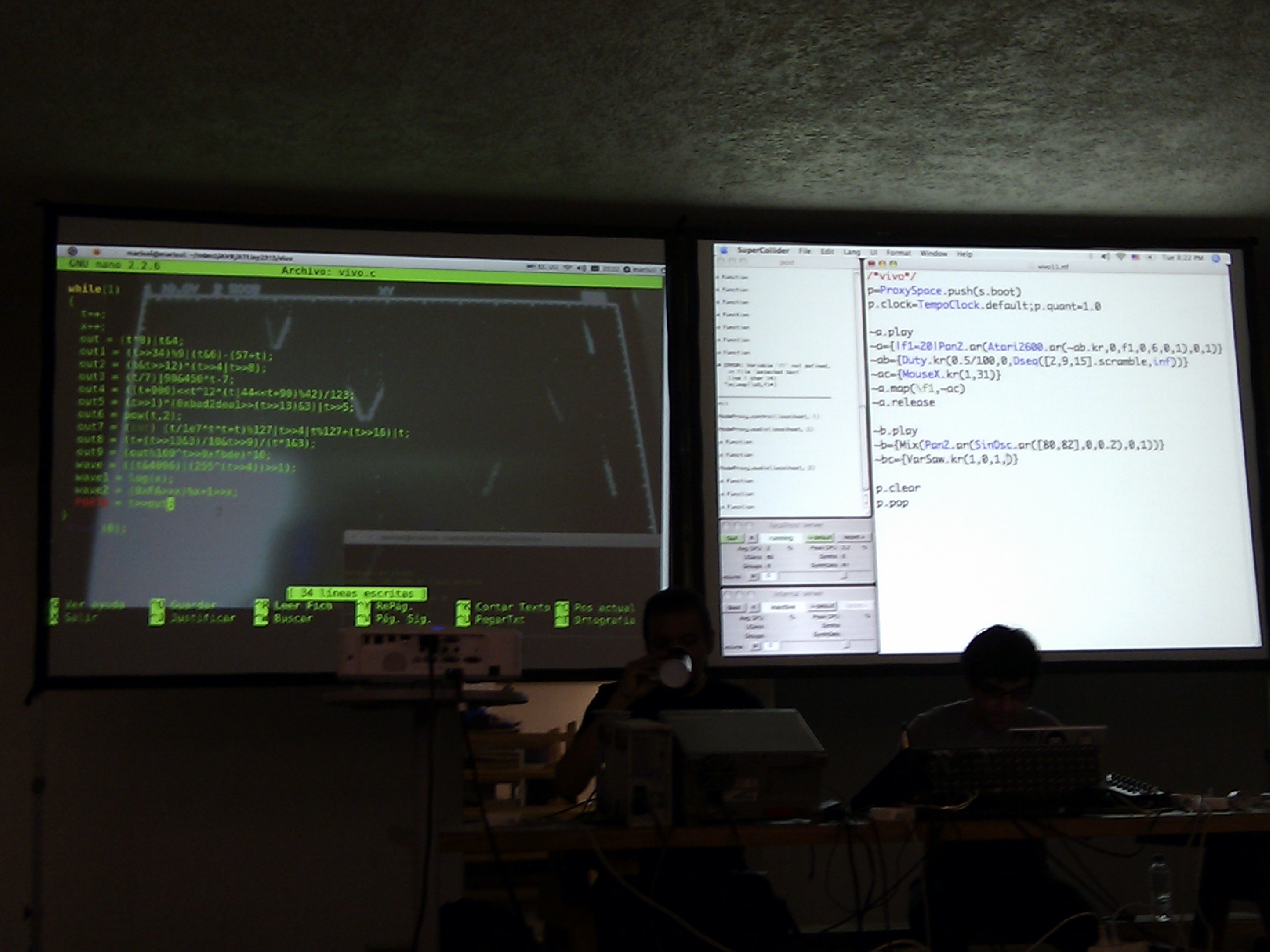 Hernani VillaseÃ±or, Julio ZaldÃ­var (M0M0) – A performance of contrasts between Julio’s C coded 8bit-shifting ATMEL sounds and Hernani’s from scratch supercollider scripts, both building up in intensity through the performance, a great opener. A side effect of Julio using avrdude to upload code resulted in the periodic sonification of bytecode as it spilled into the digital to analogue converter during uploads. He was also using an oscilloscope to visualise the sound output, some of the code clearly designed for their visuals as well as crunchy sounds. 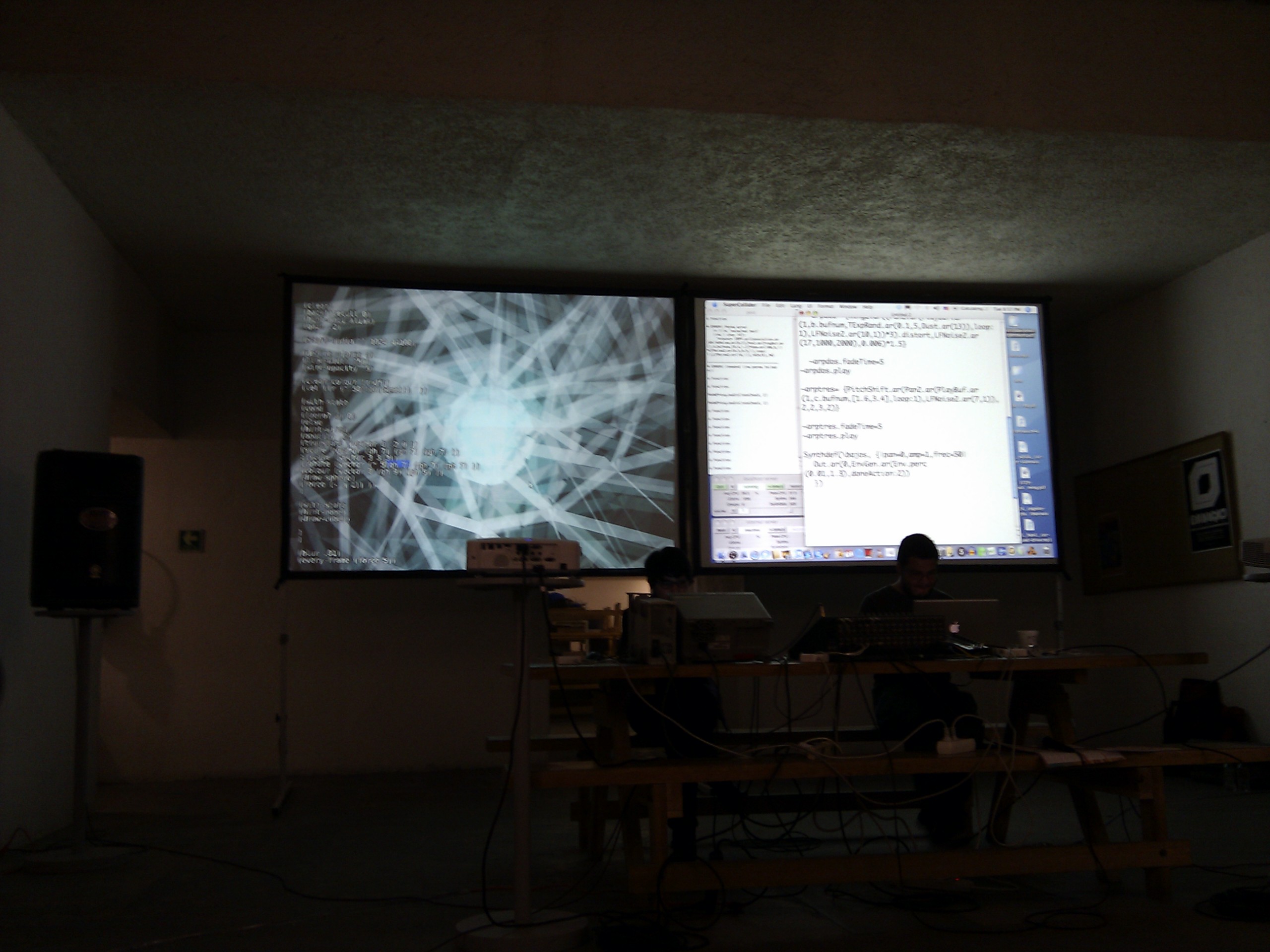 Mitzi Olvera and Alejandro Franco – I’d been aware of Mitzi’s work for a while from her fluxus videos online so it was great to see this performance, she made good use of the fluxus immediate mode primitives, and started off with restricting them to points mode only, while building up a complex set of recursive patterns and switching render hints to break the performance down into distinct sections. She neatly transitioned from the initial hard lines and shapes all the way to softened transparent clouds. Meanwhile Alejandro built up the mix and blasted us with Karplus Strong synthesis, eventually forcing scserver to it’s knees by flooding it with silent events. 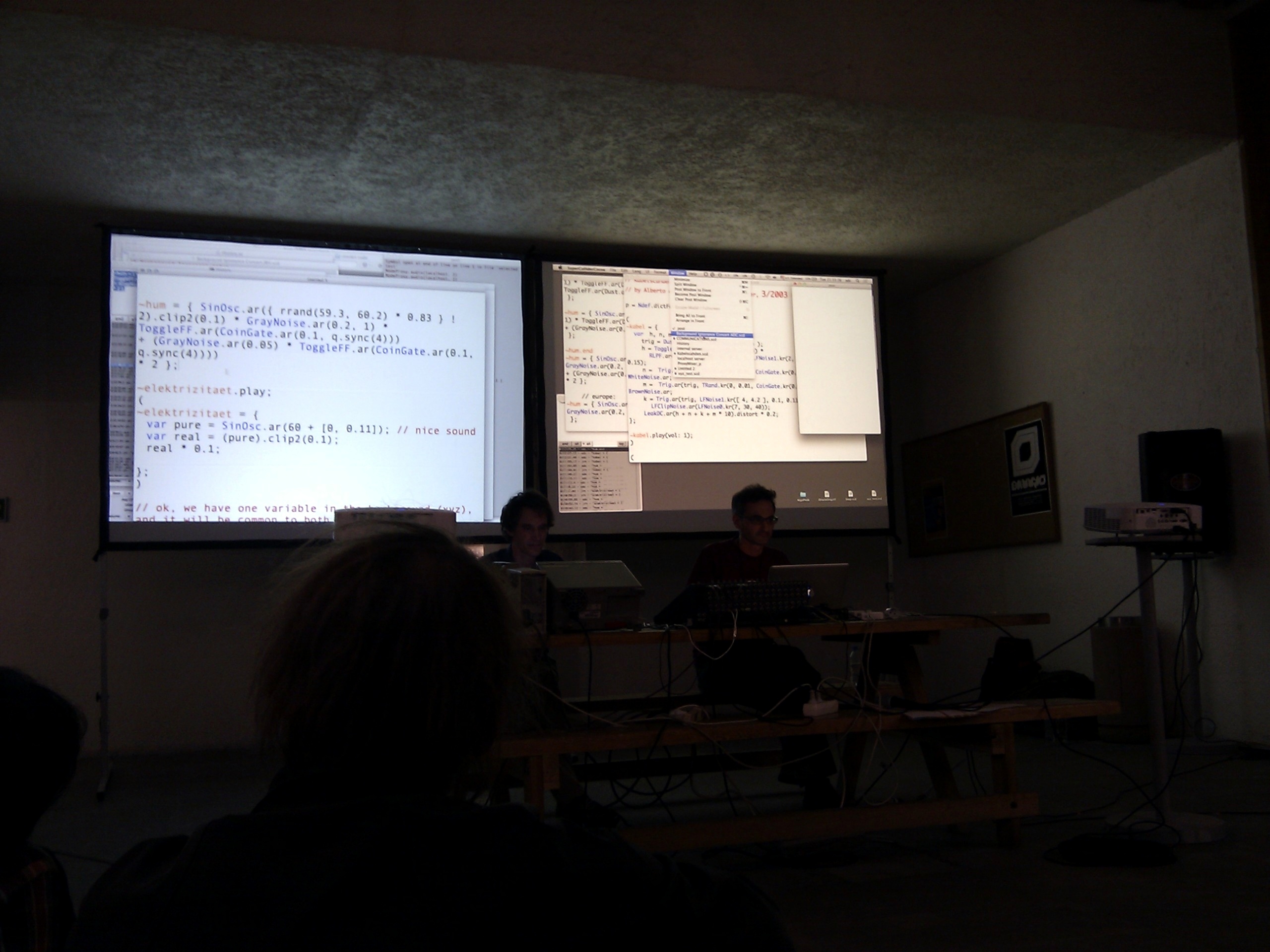 Julian Rohrhuber, Alberto de Campo – A good chunk of powerbooks unplugged (plugged in) from Julian and Alberto, starting with a short improvisation before switching to a full composition explored within the republic framework, sharing code and blending their identities. 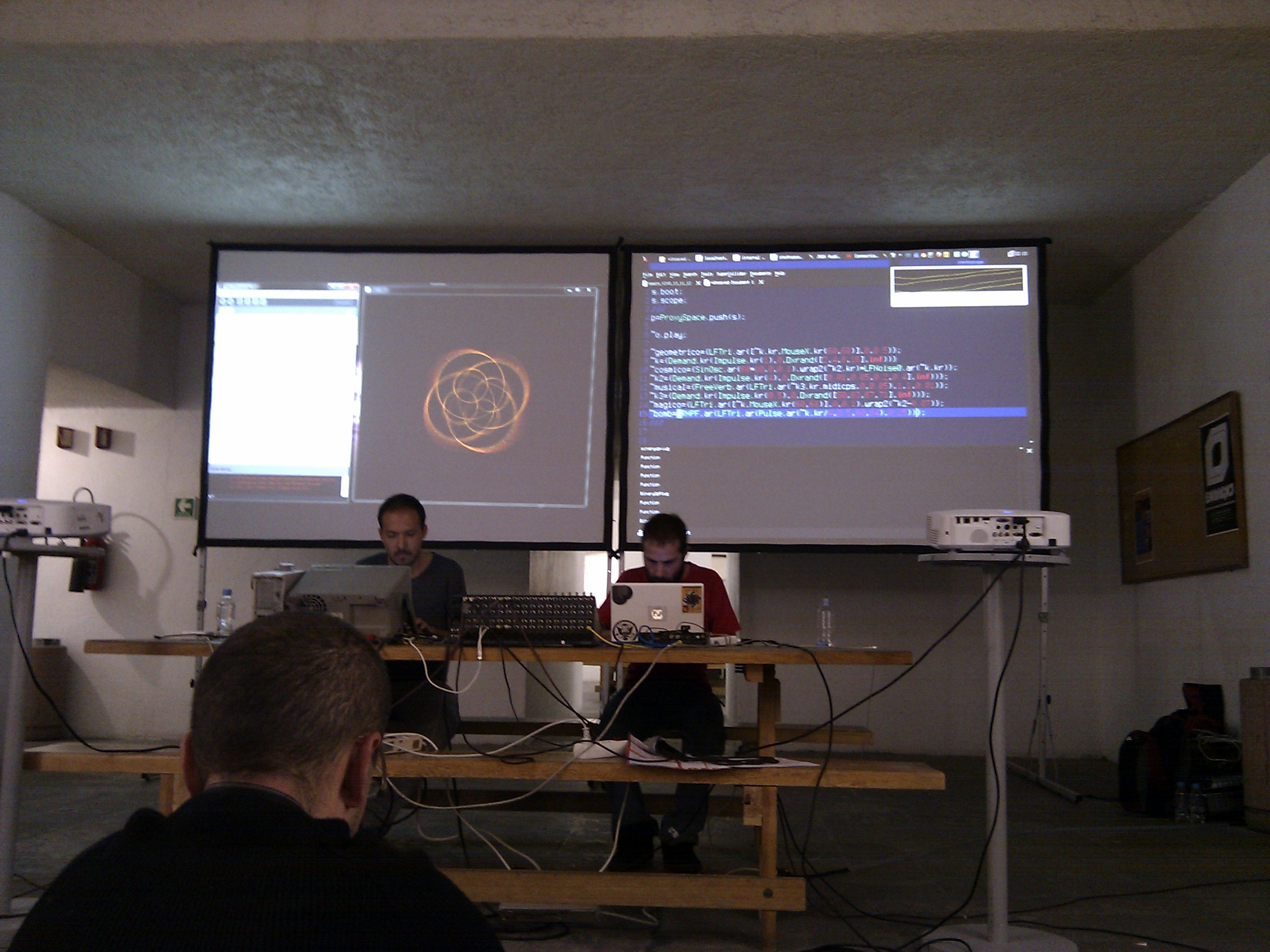 MartÃ­n Zumaya (Stereo Vision), JosÃ© Carlos Hasbun (joseCaos) – It was good to see Processing in use for livecoding, and Martin improvised a broad range of material until concentrating on iconic minimal constructions that matched well with JosÃ©’s sounds – a steady build up of dark poly-rhythmic beats with some crazy feedback filtering mapped to the mouse coordinates to keep things fluid and unpredictable. 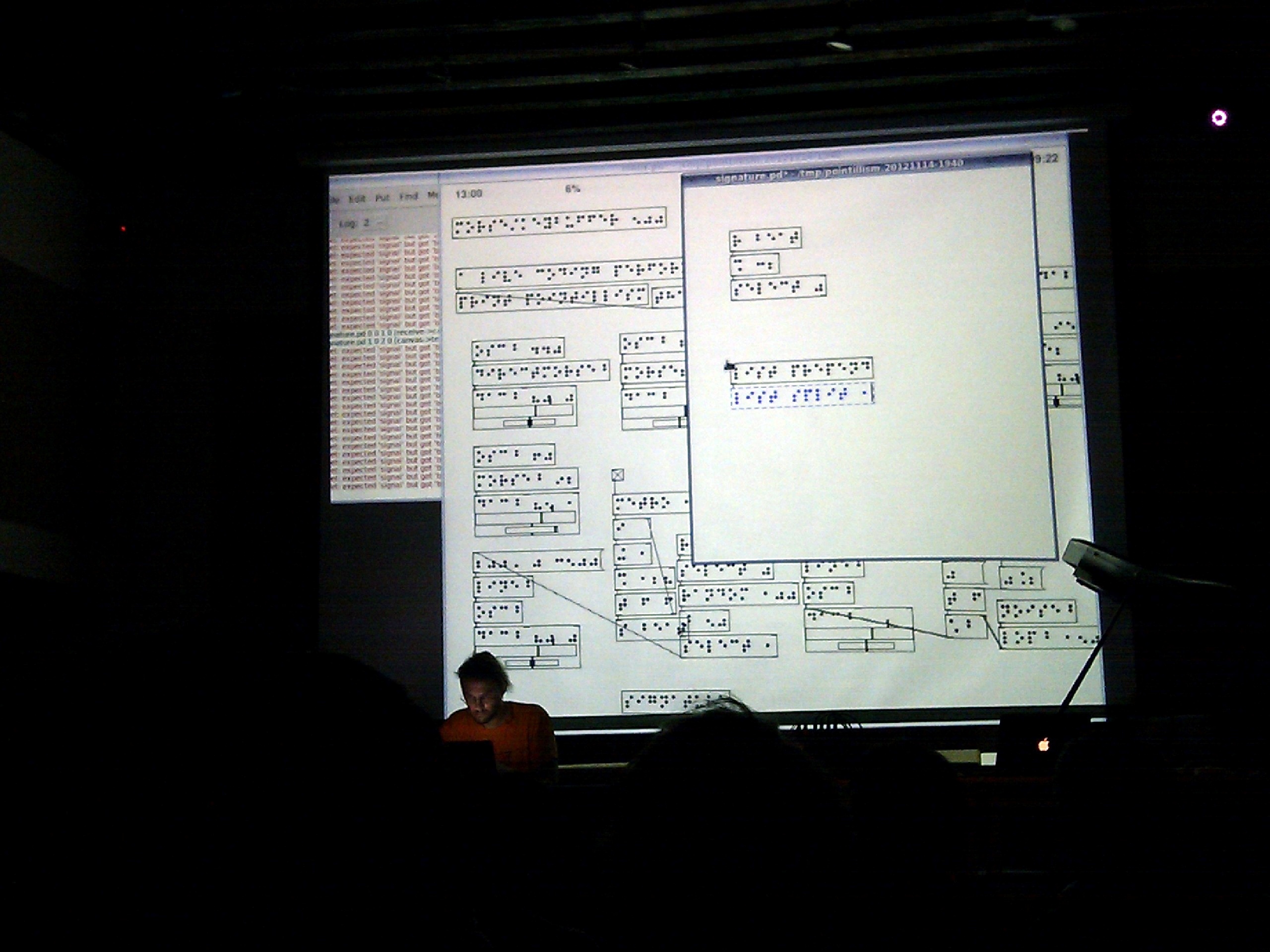 IOhannes ZmÃ¶lnig – pure data morse code livecoded in Braille. This was an experiment based on his talk earlier that day, a study in making the code as hard to read for the performer as the audience. In fact the resulting effect was beautiful, ending with the self modification of position and structure that IOhannes is famous for – leaving a very consistent audio/visual link to the driving monotonic morse bass, bleeps and white noise. 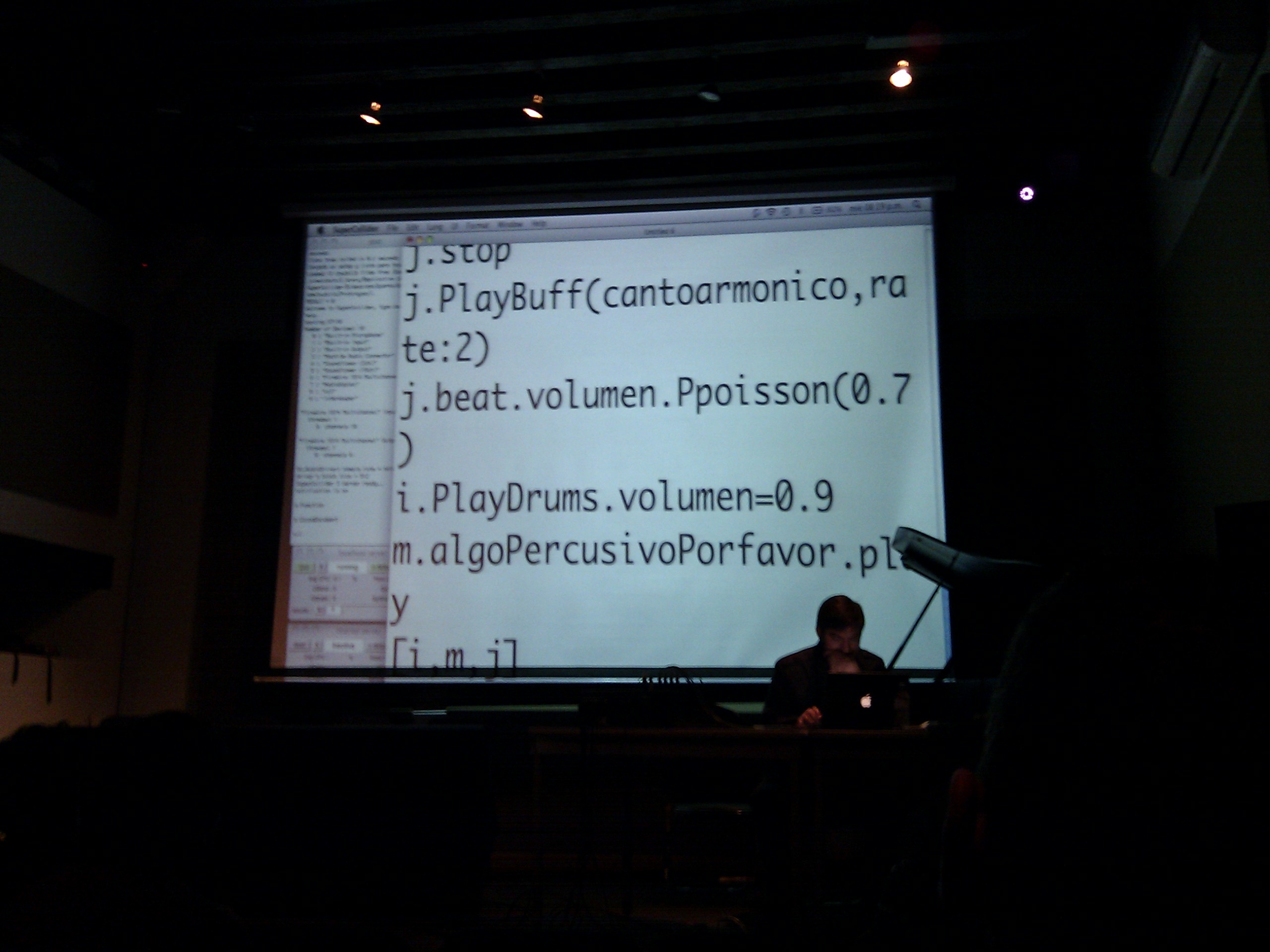 Radiad3or (Jaime Lobato, Alberto Cerro, Fernando LomelÃ­, IvÃ¡n Esquinca y Mauro Herrera) – part 1 was human instruction, analogue performance as well as a comment at the inadequacy of livecoding for a computer, with commands like “changeTimbre” for the performers to interpret using their voices, a drumkit, flutes and a didgeridoo. Following this, part 2 was about driving the computer with these sounds, inverting it into a position alongside or following the performers rather than a mediator, being reprogrammed by the music. This performance pushed the concept of livecoding to new levels, leaving us in the dust still coming to terms with what we were trying to do in the first place! 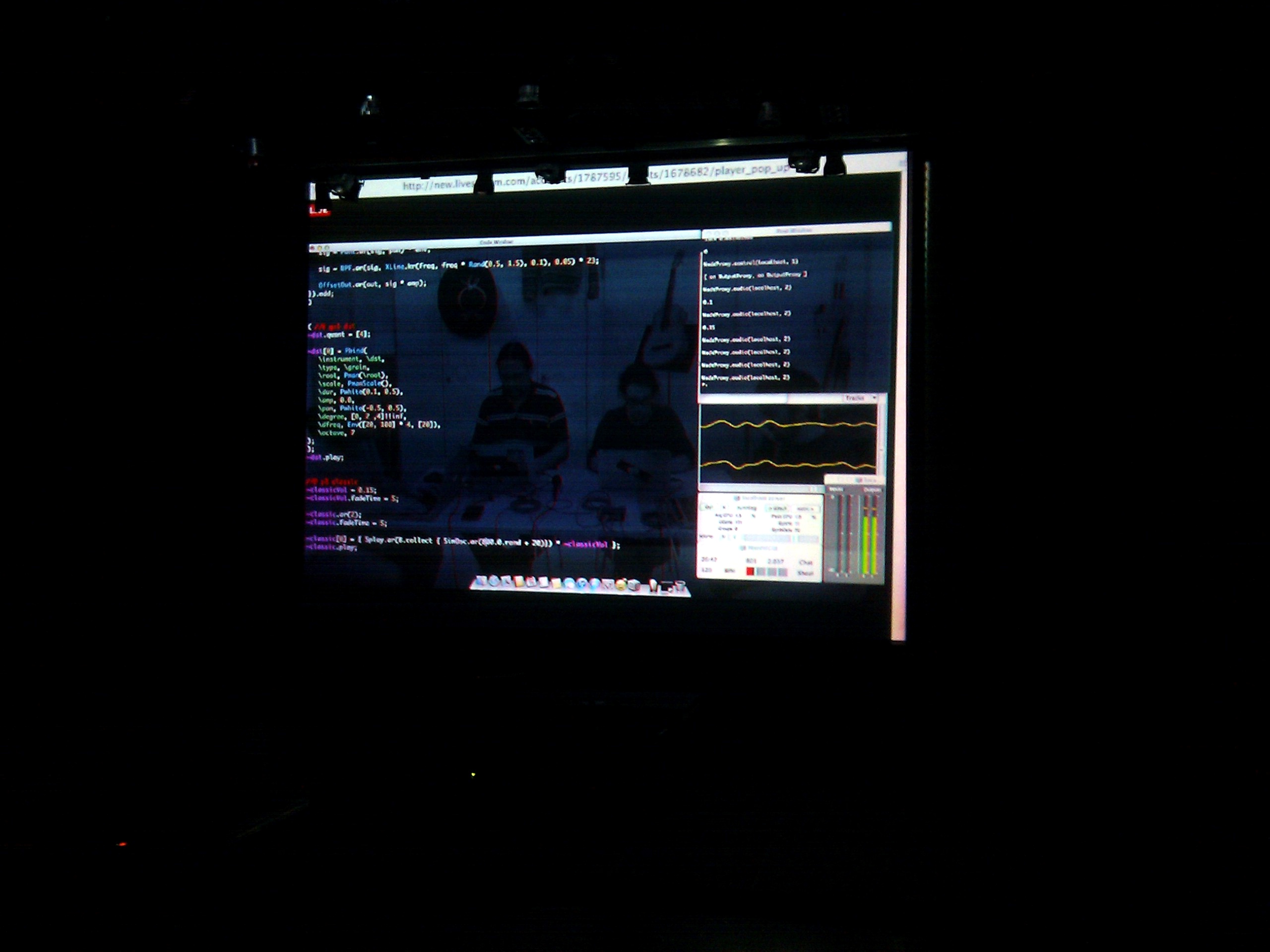 BenoÃ®t and the Mandelbrots (live from Karlsruhe) – a remote performance from Germany, the Mandelbrots dispatched layers upon layers of synthesised texture, along with their trademark in-performance text chat, a kind of code unto itself and a view into their collective mind. The time lag issues involved with remote streaming, not knowing what/when they could see of us, added an element to this performance all of it’s own. As did the surprise appearance of various troublemakers into the live video stream…

Jorge RamÃ­rez – another remote performance, this time from Beijing, China. Part grimy glitch and part sonification of firewalls and effects of imagined or real monitoring and censorship algorithms this was powerful, and included more temporal disparity – this time caused by the sound arriving some time before the code that described it. 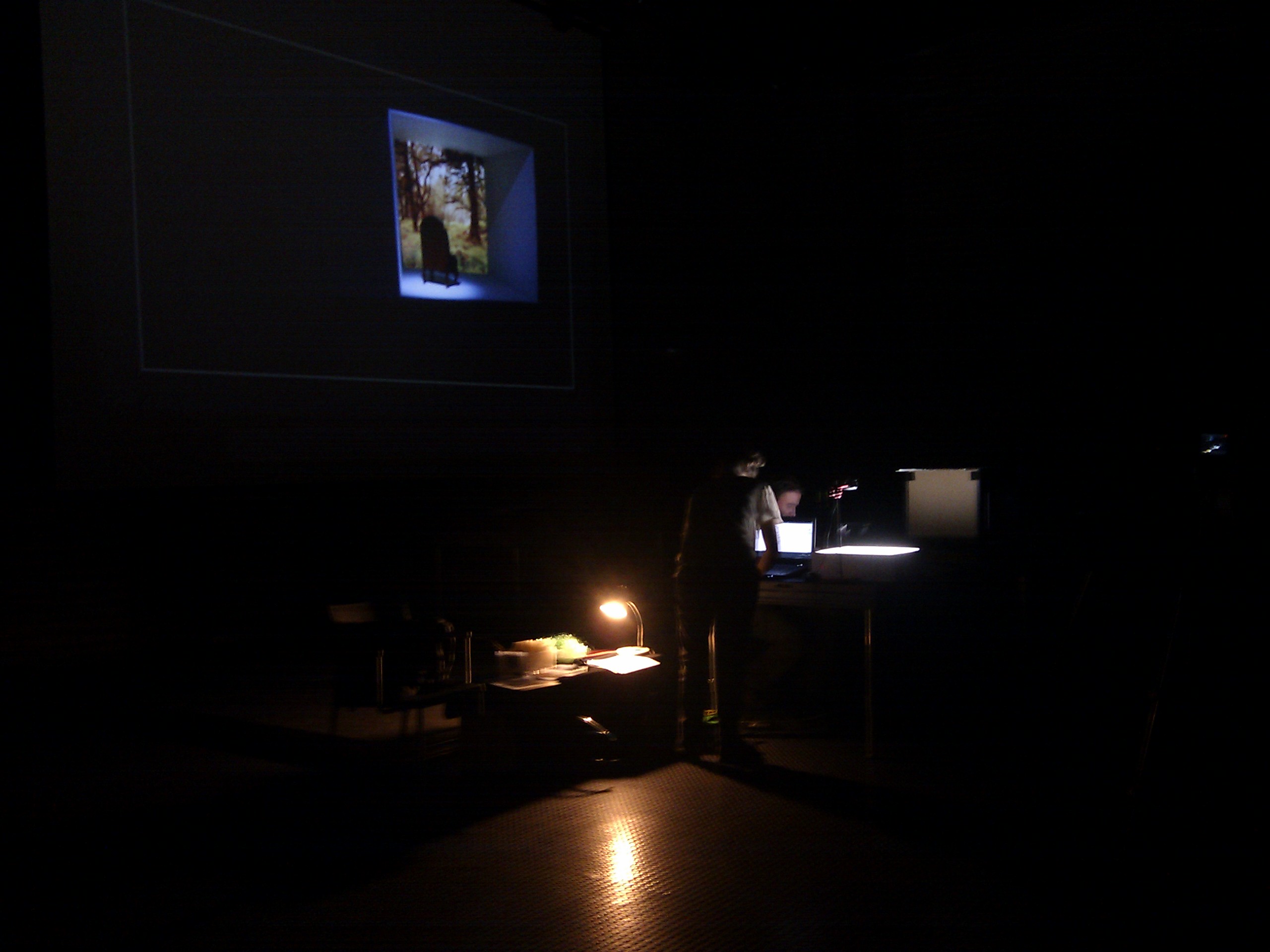 Si, si, si (Ernesto Romero Mariscal Guasp y Luciana Renner Maceralli) – a narrative combination of Luciana’s performance art, tiny webcam augmented theatre sets, and Ernesto’s supercollider soundtrack. Livecoding hasn’t ventured into storytelling much yet, and this performance indicated that it should. Luciana’s inventive use of projection with liquids and transparent fibres reminded me of the early days of film effects and was a counterpoint to Ernesto’s synthesised ambience and storytelling audio. 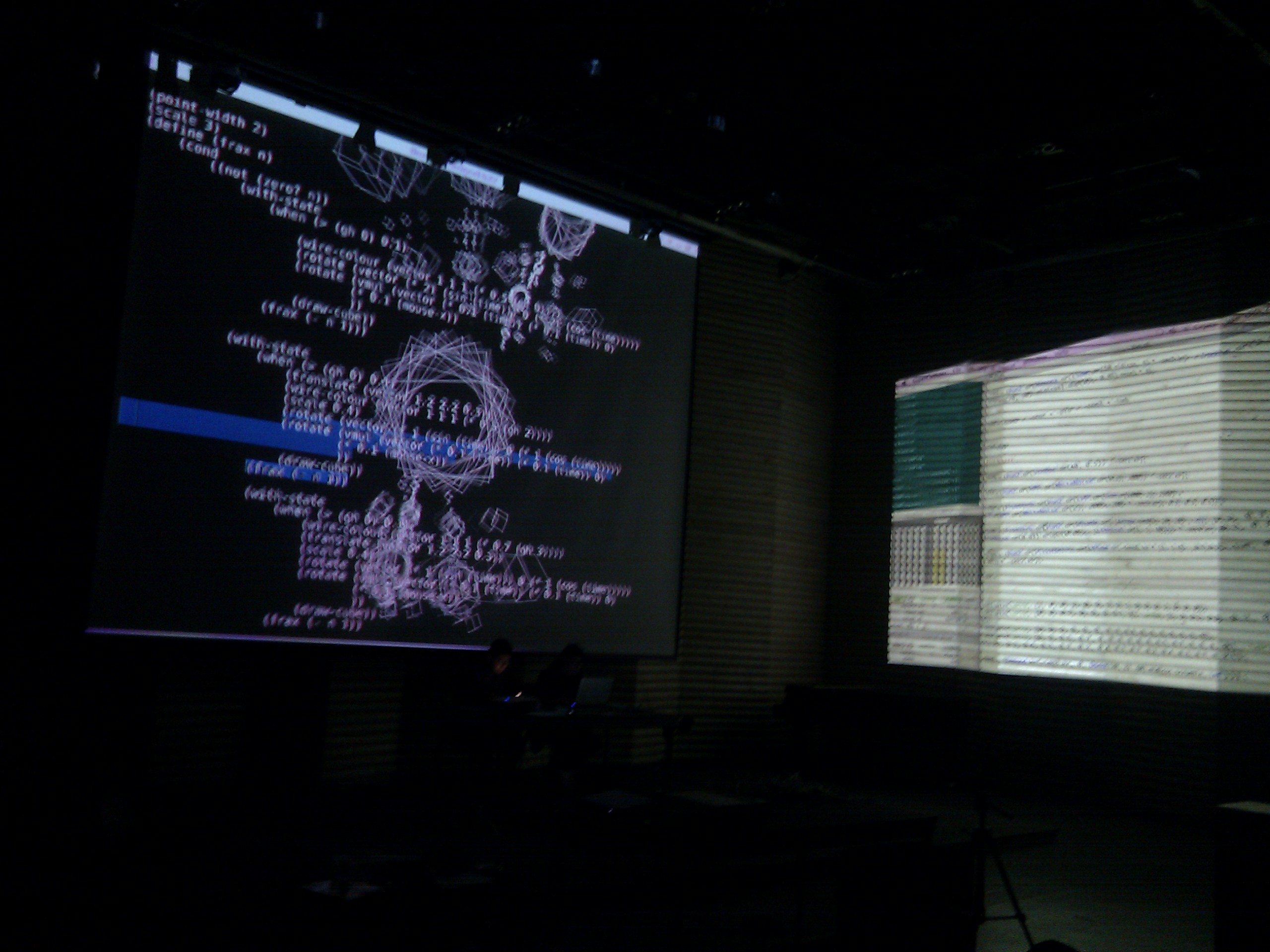 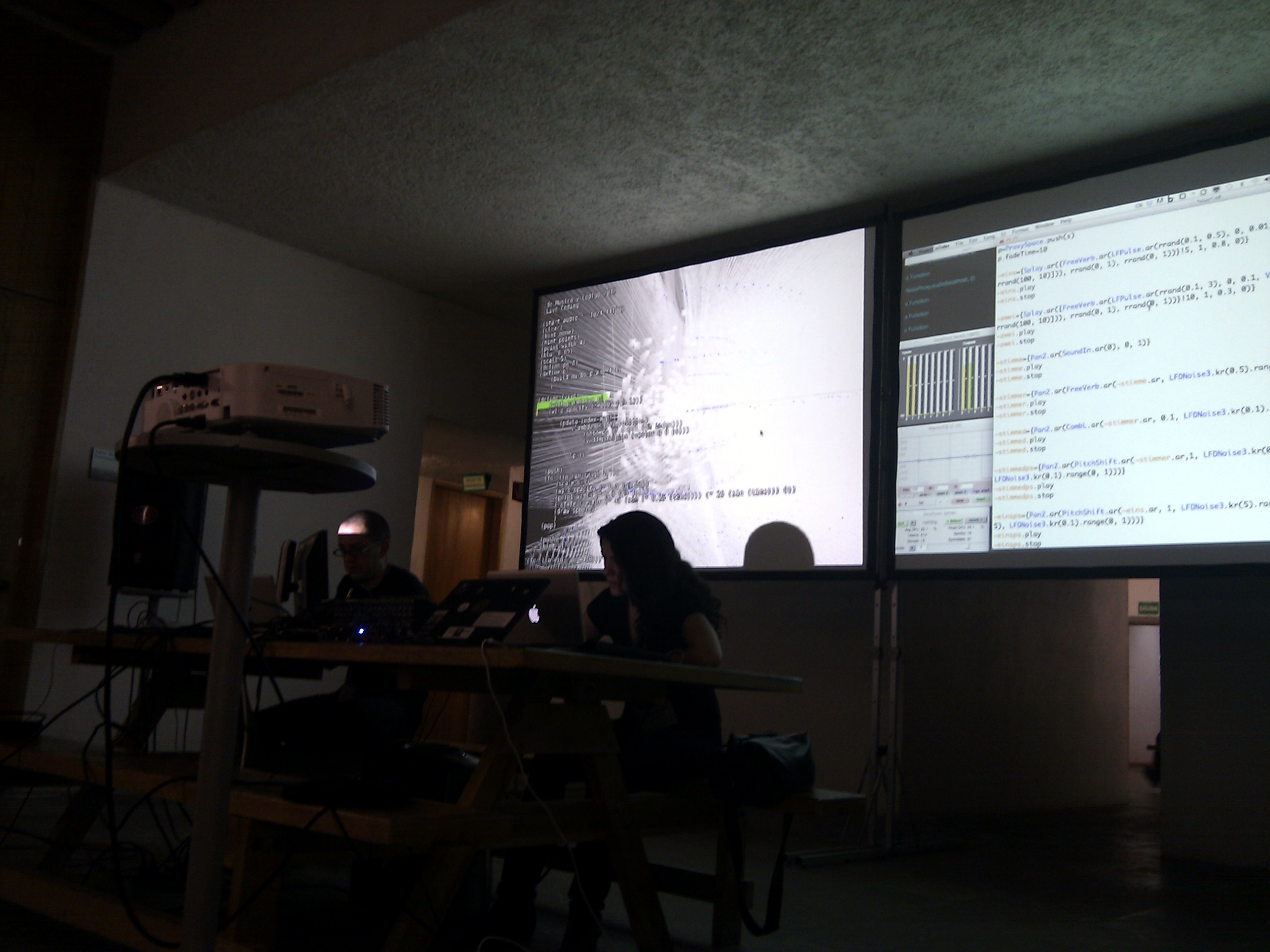 Alexandra CÃ¡rdenas, Eduardo Obieta – Something very exciting I noticed was a tendency when working in sound/visual pairs such as Alexandra and Eduardo for the sounds to be designed with the visuals in mind – e.g. the use of contrasting frequencies that could be picked out well by fft algorithms. This demonstrated a good mutual understanding, as well as a challenge to the normal DJ/VJ hierarchy. Eduardo fully exercised the NURBS primitive (I remember it would hardly render at 10fps when I first added it to fluxus!) exploding it to the sound input before unleashing the self-test script to end the performance in style! 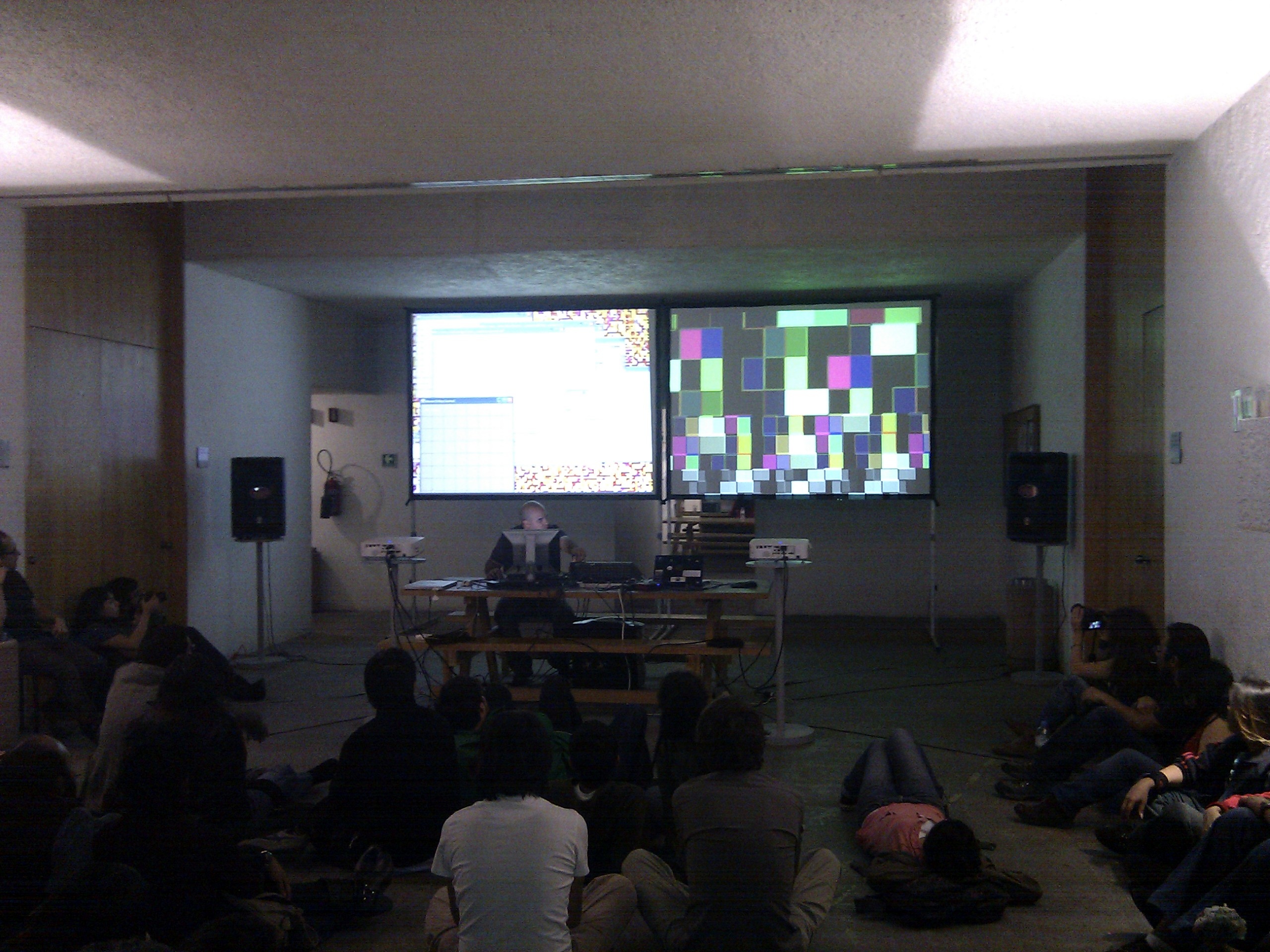 Eduardo MelÃ©ndez – one of the original Mexican livecoders, programming audio and visuals at the same time! Not only that – but text (supercollider) and visual programming (vvvvv) in one performance too. I would have liked to have paid closer attention to this one, but I was a bit nervous 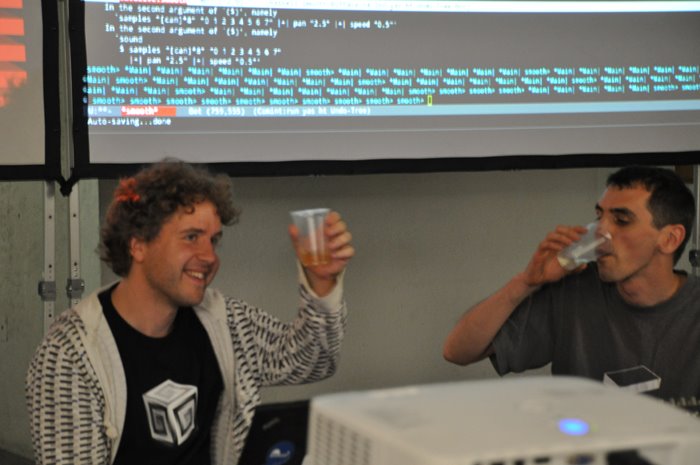 Slub finished off the performances, but I’ll write more about that soon as material comes in (I didn’t have time to take any photos!).