One of the great unknowns following the first weavecoding project was the nature of tablet weave. Other than a few primitive attempts that didn’t work in all cases and lead us to further questions, modelling tablet weave fully was left as an undeciphered mystery. Tablet weave is a complex and particularly ancient form of weaving, while it’s simple to do with easily found materials, it produces a kind of double weave with twisting, and you can create crazy higher level 3D structure as it is free from the constraints of fixed loom technology. 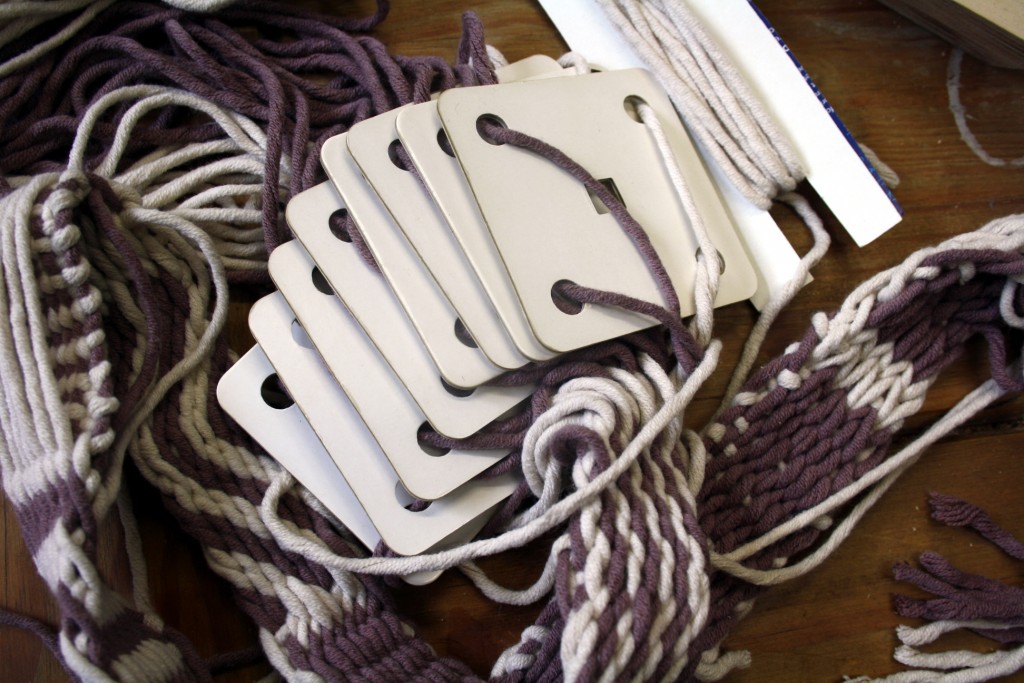 The trick to start understanding this (I still have quite some way to go) came from only thinking about a single square tablet. If we follow the paths of each of the four threads while turning the square 90 degrees at a time we can see how tablet weaving is a combination of a weave (up and down movement) and a braid (left and right), as it twists the threads in relation to each other. 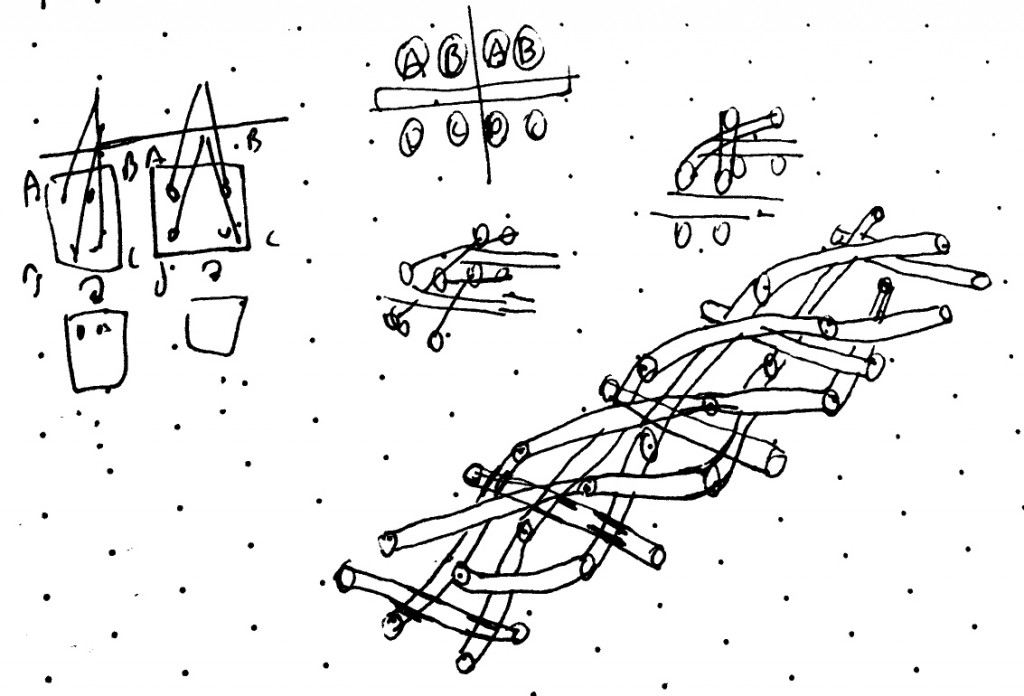 From this sketchy starting point it was possible to create two 3D objects to represent each twist, one for clockwise and another for anticlockwise. If you colour the separate threads appropriately and combine them together you get something like this:

While this looks fancy, it’s wrong. The threads may be in the correct form conceptually, but woven structure comes about as a relationship between the positioning of the threads and the tension applied to them. Many of the threads above should be pulled straight and push others out of the way to give a pattern that was actually straight stripes of colour, rather than chevrons. So how can we add tension?

One way to approach this problem would be to use a physical simulation of the kind usually applied to cloth simulation, and ‘relax’ the the threads to achieve a realistic result, using a stochastic approach to iteratively tighten them within collision constraints, until it ‘looked right’. The problem with this is that it wouldn’t lead to a deeper understanding of what is going on here. This in a way is related to a bigger issue with AI and machine learning, where techniques like artificial neural networks can be trained to solve problems well enough to be useful, for example in speech recognition – but do not provide any new knowledge about language or understanding of deeper scientific issues.

So if we want to understand some of the ‘thread logic’ of table weaving, we are can approach this in a more symbolic manner. Can we add additional straightened threads to our two twisted ones? 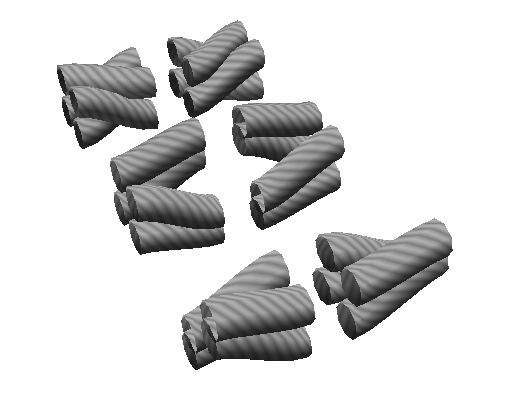 Notice that some of these shapes connect, while others are incompatible. We can start with the original twisted weave above, and process it to pull the threads straight. In order to do this we need to know the past and future actions of the weaver, or the current twist in the context of those before and after it. This makes sense, as when weaving structure emerges fully a few wefts behind the current one you are weaving – only as the tension is applied to the fabric does it take form.

The rules to describe this turn out to be well represented as a diagram. The nodes are the 3D shapes required and the edges are the actions of the weaver (the special ‘floating’ state change interestingly depends on the action before the last one – memory does seem important in tablet weaving). 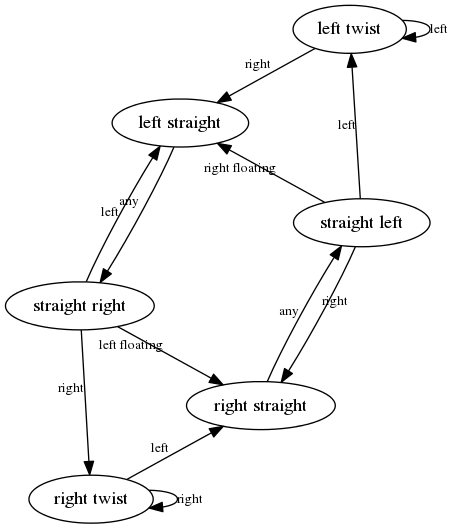 For example, we can ‘left twist’ repeatedly (the top right state) as the arrow points to itself. If we start going in the other direction we then need to pass through two straightening states to get to a full ‘right twist’. If we start going backwards and forwards in smaller numbers of turns then more complex things happen.

When we process the first weave with these rules, you can see some of the straightening effects. The tension on the threads means that some cover up others, e.g none of the yellow threads are now visible on the top of the fabric at all.

The structure is more visible here than on a real weaving as the threads are thinner that they would be for the resulting weave which would be more densely packed together (this is less realistic but helps to understand what is going on).

How do we know if any of this is correct? The only way to test this for sure is against real weave. We can try out different sequences of actions and see if the model matches. As indicated above, tablet weaving is a technique that comprises several categories of weaves – these define some specific types of structure we can test.

Type 1: Repeated twists and turn back

Most normal tablet weave consists of twisting repeatedly 90 degrees in the same direction and weaving a weft each time. In practice there is only so far you can go in the same direction before the unwoven warp threads behind the tablets get tangled up, so you need to change direction and go the other way until they are untangled, providing some symmetry to the pattern. The first example has all the tablet threads aligned in the same sequence – and we weave 8 turns one way and 8 turns back again. You can see in the middle when we change direction we create a short straightened ‘float’ section which causes the tension to pull the threads straight here. 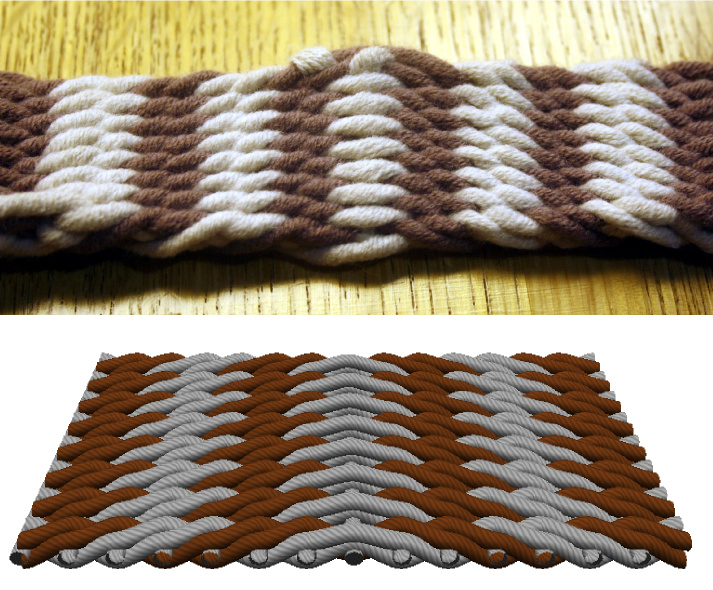 One of the further mysteries that our first tablet weaving simulations couldn’t previously recreate were situations where the pattern on the back and the front of the weave were not opposite of each other. This is highly unusual in weaving, but this model seems to represent this correctly. Here the actions are the same as the first example – 8 one way and then the other, but the thread colours in the tablets are offset from one another so they are staggered and you get the diagonal patterns.

Part of the complexity of tablet weaving is because it is a kind of double weave – there are two intertwined weave structures happening at the same time. If we repeat two wefts of 90 degrees one way followed by two more the other direction, the two weaves remain on the same side of the textile – which can be seen clearly if we colour them appropriately. This example keeps the white weave on the top side with the brown one on the lower side. 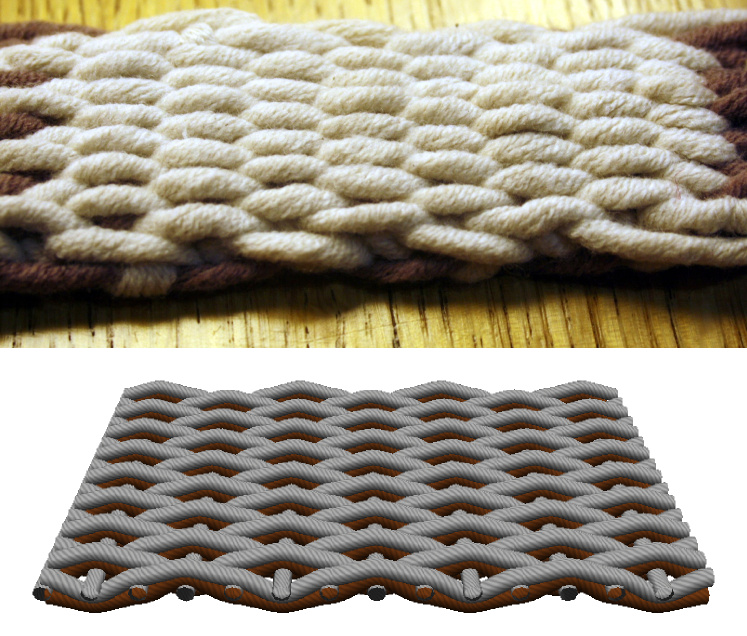 The third type of weave is not really a weave but a breakdown of the process caused by only weaving single 90 degree turns backwards and forwards repeatedly. This means half of the threads are not incorporated into the weave and ‘float’ along the surface on both sides. 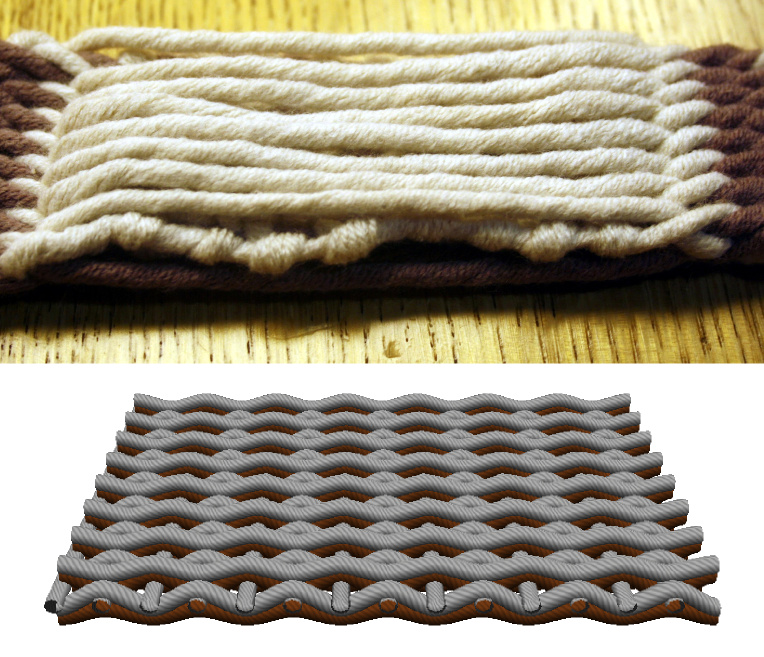 While the language to fully describe the tablet weaving has yet to be developed properly, you can have a go yourself with this model which is currently online here (takes a few moments to render at first).

This gets us closer to a working model of tablet weaving, and provides something we can start to use for a more advanced aims of the Penelope project. For example, can we use the pattern matrix to tangibly livecode tablet weaving? Does this make it possible to explore and explain this type of weaving?

If this kind of textile wasn’t complicated enough, people in ancient times combined multiple weaving techniques, for example tablet weaving and warp weighted weaving in the same piece of fabric. Creating a kind of ‘grand unified’ weaving model is an additional future challenge, so we can start to understand better the thought processes involved in these advanced techniques.