The graphviz visualisations we’ve been using for quipu have quite a few limitations, as they tend to make very large images, and there is limited control over how they are drawn. It would be better to be able to have more of an overview of the data, also rendering the knots in the right positions with the pendants being the right length. 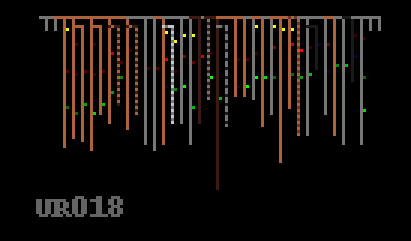 These are drawn using a python script which reads the Harvard Quipu Database and renders quipu structure using the correct colours. The knots are shown as a single pixel attached to the pendant, with a colour code of red as single knot, green for a long knot and blue as a figure of eight knot (yellow is unknown or missing). The value of the knot sets the brightness of the pixel. The colour variations for the pendants are working, but no difference between twisted and alternating colours, also no twist direction is visualised yet.

Another advantage of this form of rendering is that we can draw data entropy within the quipu in order to provide a different view of how the data is structured, as a attempt to uncover hidden complexity. This is done hierarchically so a pendant’s entropy is that of its data plus all the sub-pendants, which seemed most appropriate given the non-linear form that the data takes.

We can now look at some quipus in more detail – what was the purpose of the red and grey striped pendants in the quipu below? They contain no knots, are they markers of some kind? This also seems to be a quipu where the knots do not follow the decimal coding pattern that we understand, they are mostly long knots of various values.

There also seems to be data stored in different kinds of structure in the same quipu – the collection of sub-pendants below in the left side presumably group data in a more hierarchical manner than the right side, which seems much more linear – and also a colour change emphasises this.

Read left to right, this long quipu below seems very much like you’d expect binary data to look – some kind of header information or preamble, followed by a repeating structure with local variation. The twelve groups of eight grey pendants seem redundant – were these meant to be filled in later? Did they represent something important without containing any knots? We will probably never know.

The original thinking of the pixelquipu was to attempt to fit all the quipus on a single page for viewing, as it represents them with the absolute minimum pixels required. Here are both pendant colour and entropy shown for all 247 quipu we have the data for: 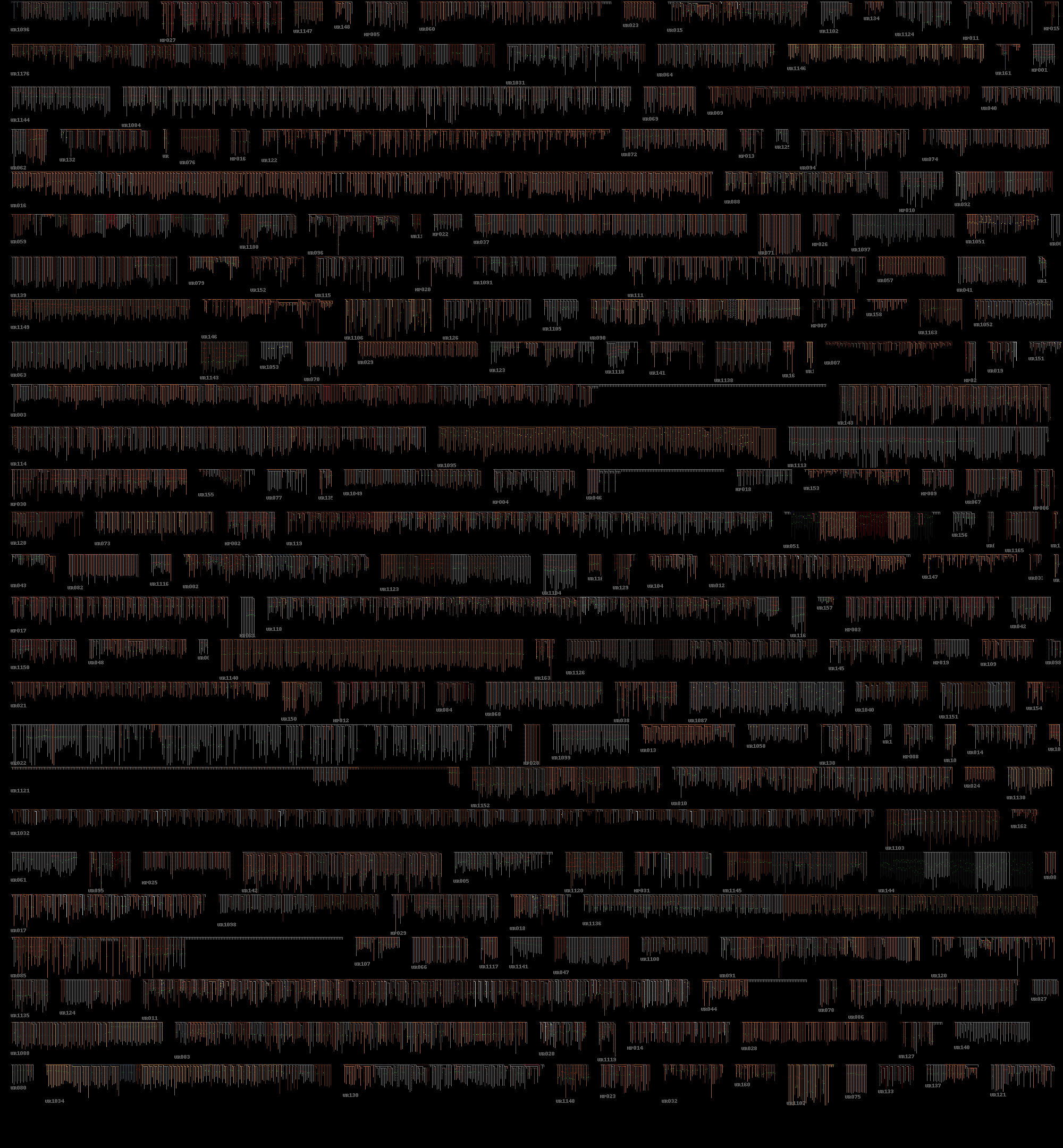 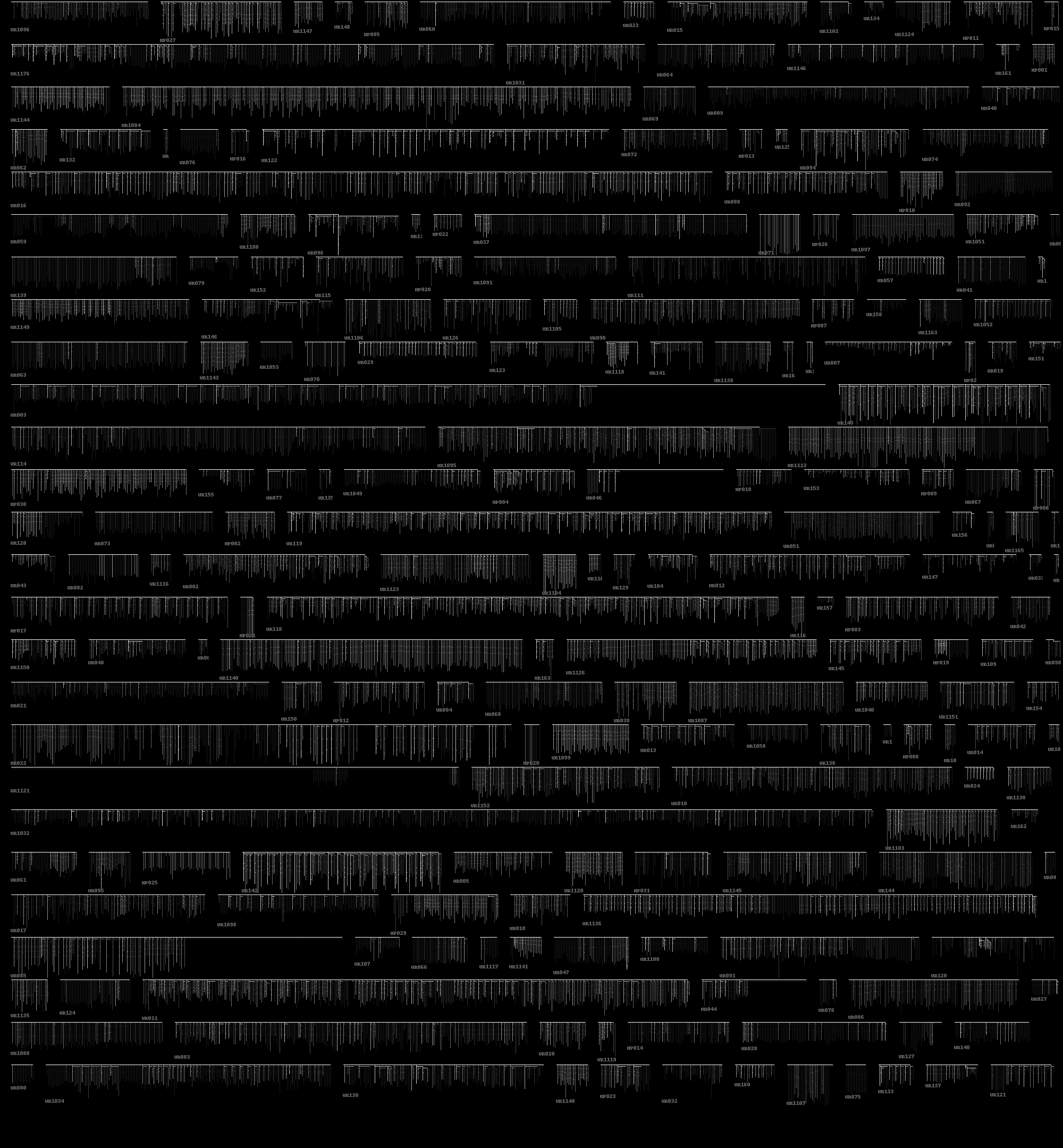 Setting off from Copenhagen, the weaving codes tour continued as Emma Cocker, Alex McLean, Ellen Harlizius-KlÃ¼ck and I sped across the Danish countryside on the train. We were heading for Aarhus to spend some time working with people at the other end of the technology spectrum – The Center for Participatory IT in Aarhus University.

We were invited by Geoff Cox to run a workshop over two days, and given the nature of the faculty and time working together being at a premium on this project, we decided to to run the workshop more as invitation to join in our work (and therefore learn a bit about how artistic research is done), rather than having specific material to cover. 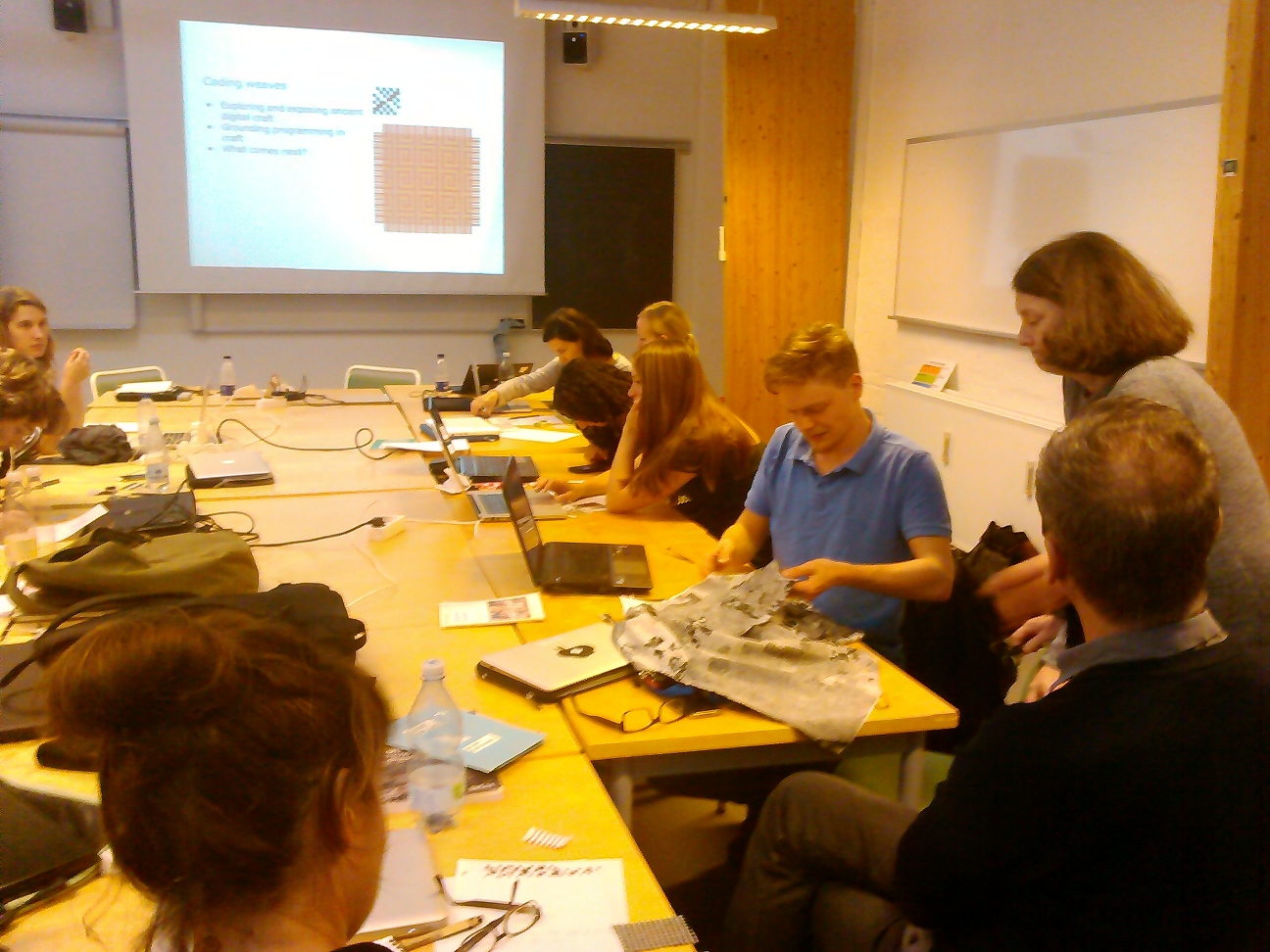 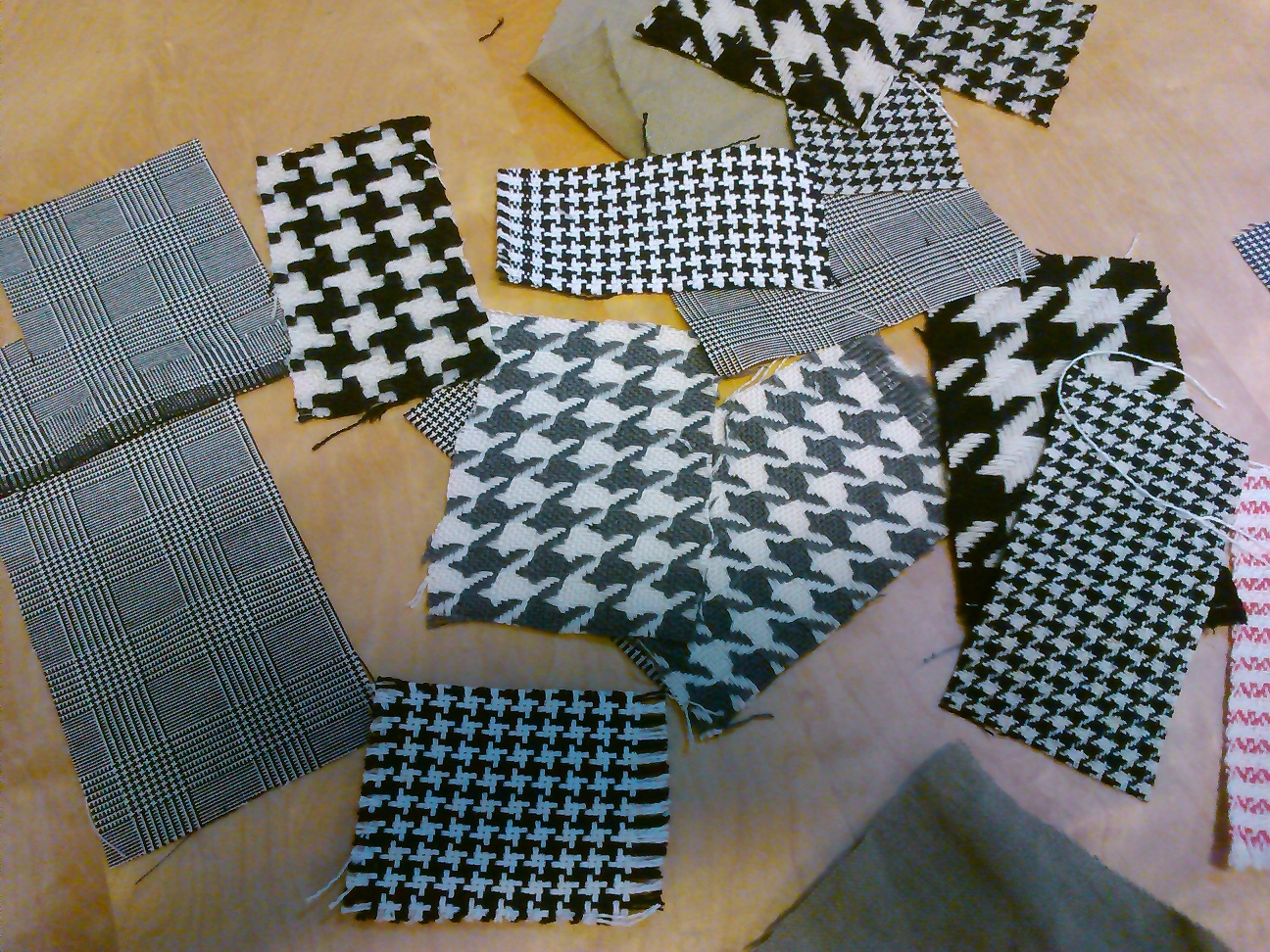 Alex and I needed to learn from Ellen how to ‘read’ a textile sample and notate it’s structure, a kind of reverse engineering process. Day one consisted of sharing out different types of weave and carefully figuring out the crossing points of warp and weft. The first challenge is to attempt to find the smallest repeat of the pattern, then record on graph paper a cross where the warp threads show over the weft threads. The big surprise is that the weave does not obviously relate to the visible pattern. It can also be hard to determine from a small sample which direction is warp and which is weft, so you can choose this arbitrarily if need be. 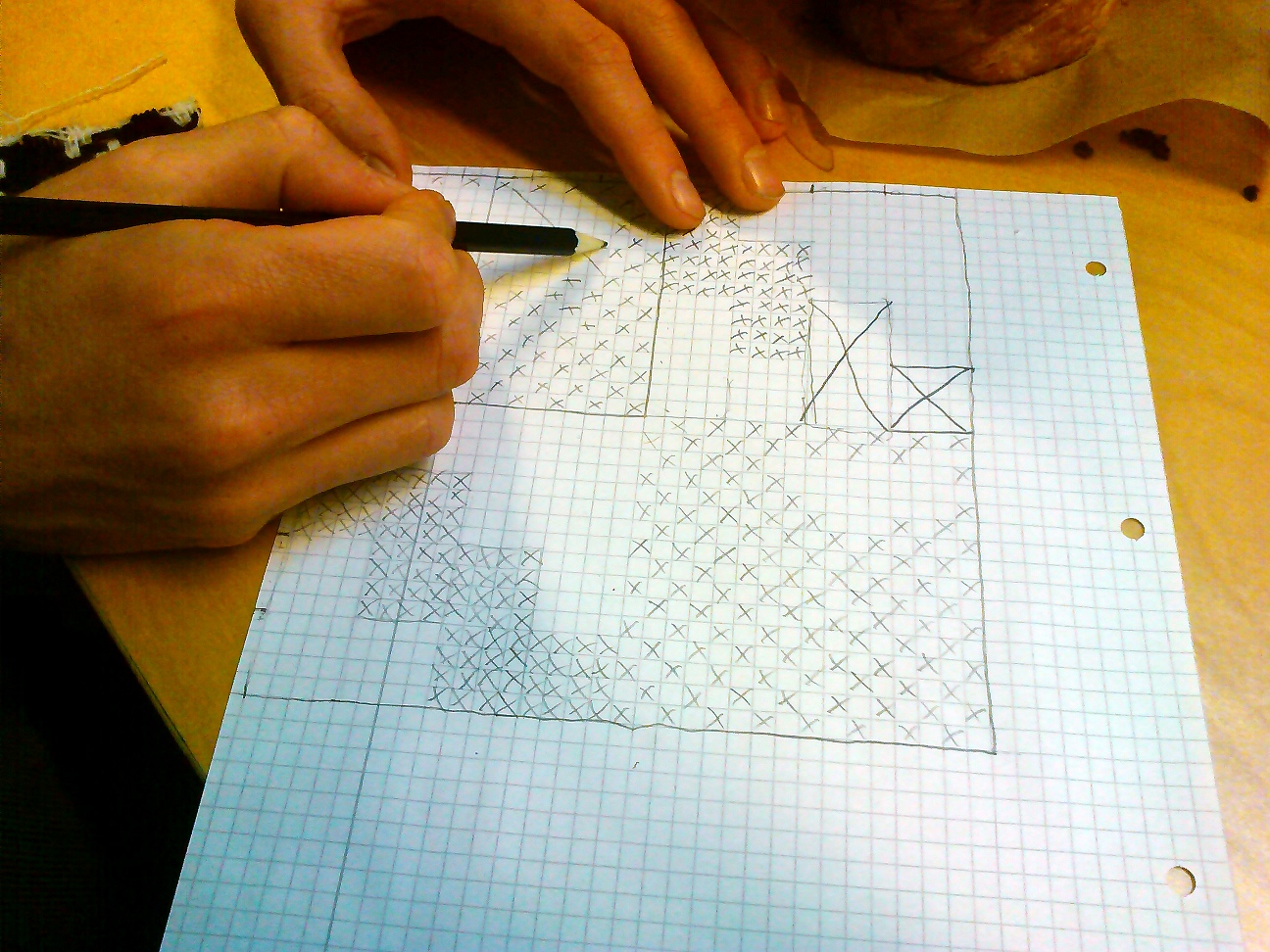 We could then compare different weaves, and also different notation styles that people used – little shorthand ways of describing large areas of plain weave for example. Much of the fabric came from Ellen’s Pepita Virus exhibition, and contained many different sizes of the “dog tooth” pattern. By comparing the notation we had all recorded for our different samples, we could tell that to scale up a pattern it’s not the case that you can also scale up the weave – the structure needs to change completely between 4 or 5 different types. 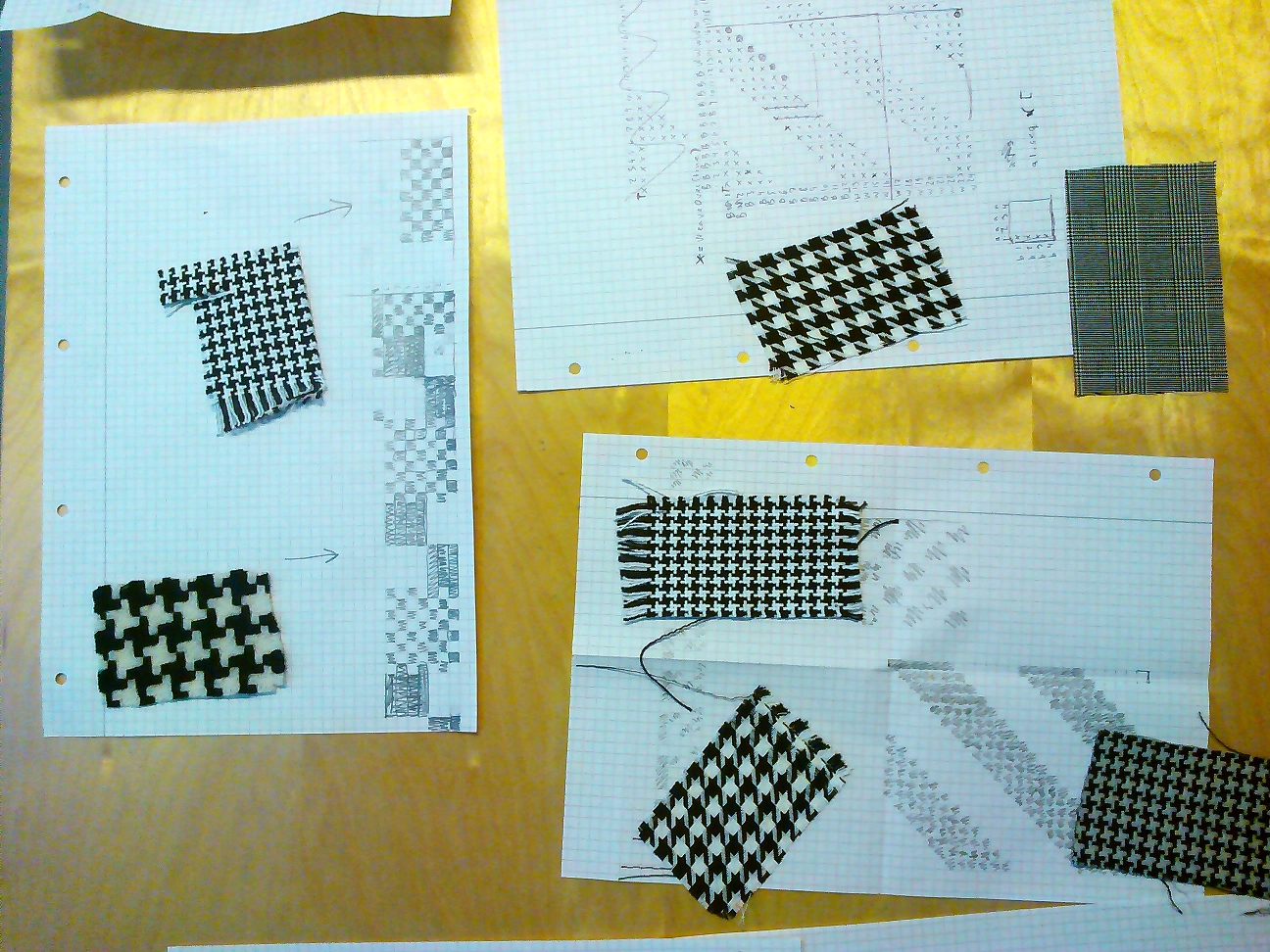 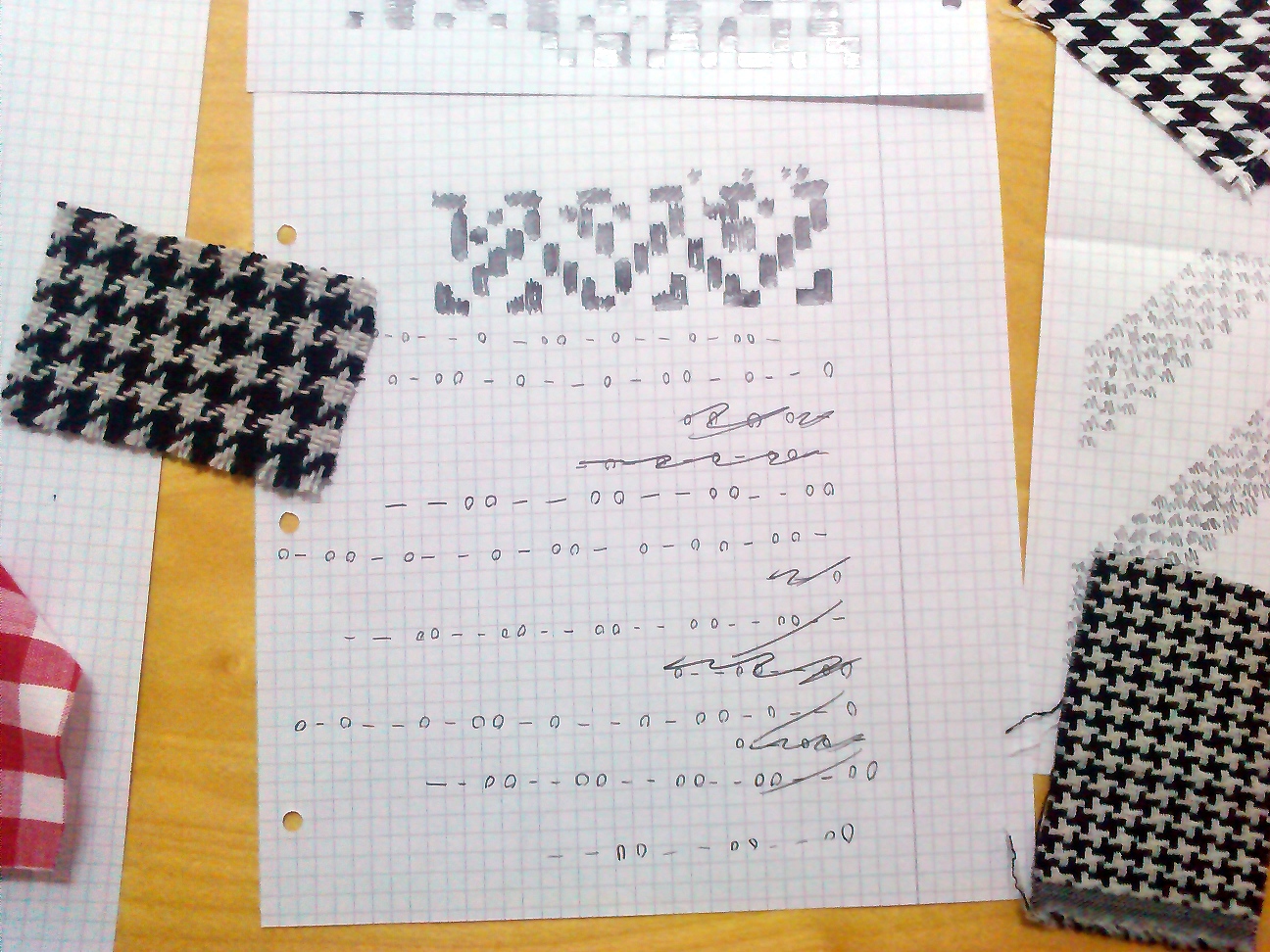 Day two consisted of testing Alex’s Javascript loom/computer, by entering the weave structure and colour sequences and checking if the resulting patterns matched. By livecoding, we could also play with the patterns without the need to physically weave them, in order to gain a better insight into how changes affected the resulting pattern – and a better overall understanding of the weaving process. 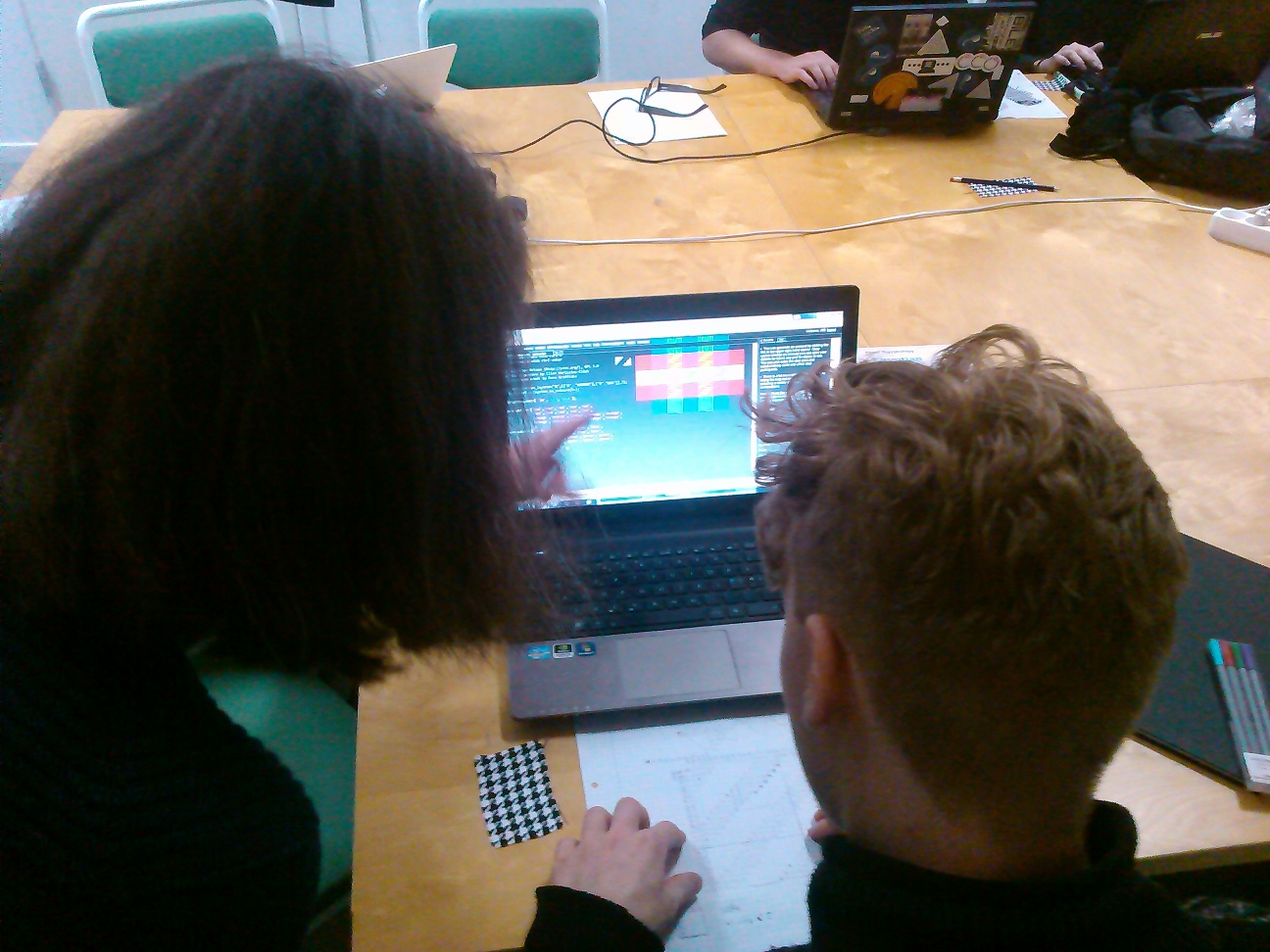 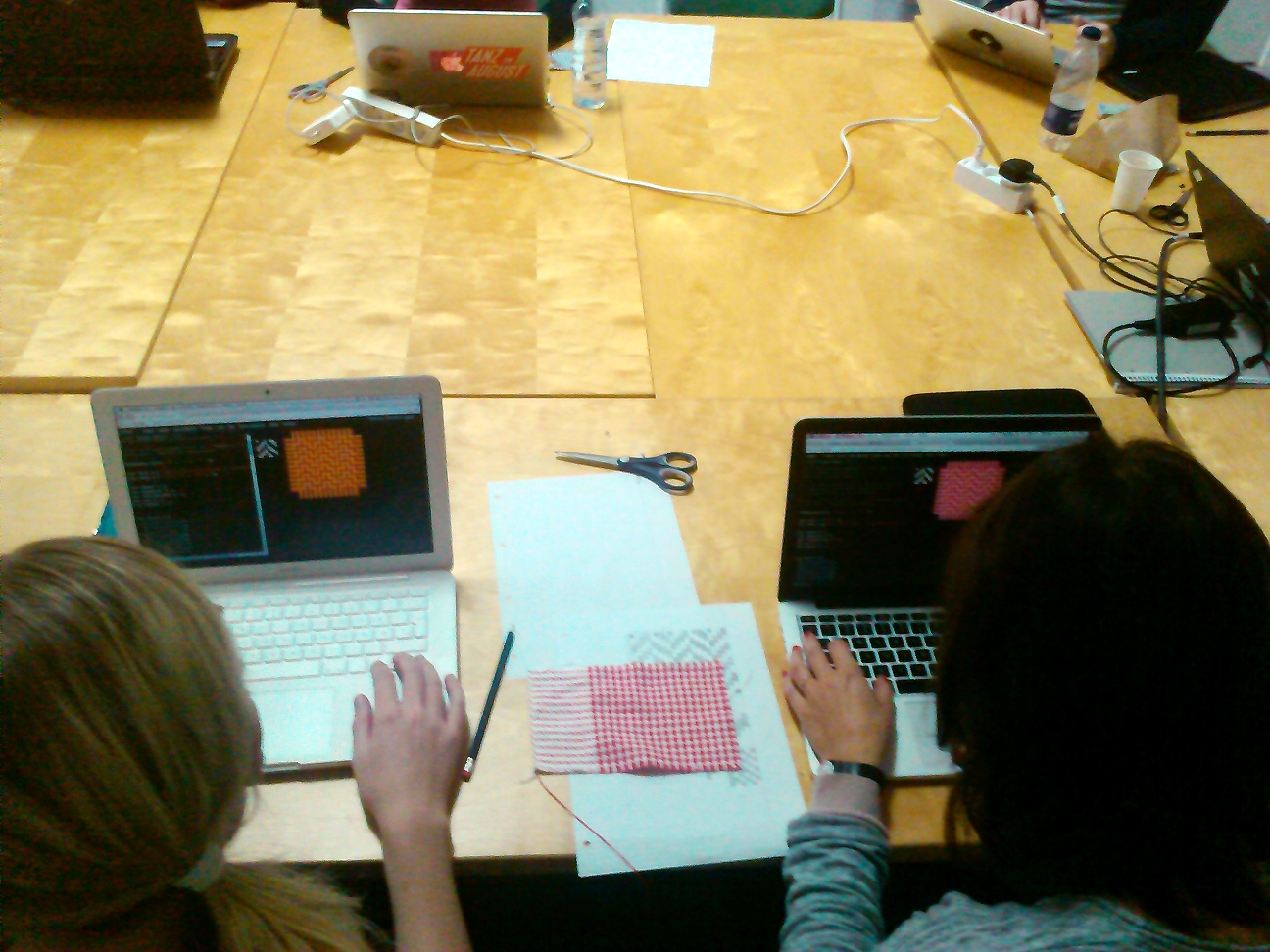 To finish up, I talked about the patterns inherent in computation, based on my previous Z80 explorations to show how the pattern creating origins of computation are still present, and the role of programming languages as ways for people to come to shared understanding via notation rather than simply telling a machine what to do.