The philosophy underlying contemporary ‘seamless’ technology production seems to be one of endless energy, bountiful resources and waste being someone else’s problem. Naive working assumptions of some form are a requirement when designing for the future, but do we believe in these enough now to make them useful? Flashy ‘aspirational’ tech videos of ever thinning devices disappearing into the ‘cloud’ seem to be less common than they once were, so perhaps not.

Whenever a philosophy starts to look shaky, there are huge opportunities to try different ideas. For example, what happens if we instead use collapse as a working assumption for design? A sudden global societal collapse may be as unlikely as fusion power coming along to ‘solve’ climate change – but as a working assumption it shines a different light on usability – for a future that will mostly likely be somewhere between these two extremes. It’s also a view that is shared by some areas of research (particularly military) and I suspect by quite a few internal corporate future planning departments.

This research direction was triggered by Amber who found a paper called “Unplanned Obsolescence: Hardware and Software After Collapse”, this quote is from one of the papers it cites:

“In our present world of virtually unlimited resources, at least from the consumer’s perspective, acquiring the newest piece of technology is often considered a desirable lifestyle choice (e.g., for early adopters). A future of collapse might see a different picture…”

For this weeks seminar at the Institute for Music and Media in Düsseldorf, Julian Rohrhuber and I wanted to explore this area a little with the students. This is something that has been present in FoAM Kernow’s work for a long time – partly as we work closely with environmental researchers so it’s hard to avoid, but it’s also inherited from the history of the FoAM network. 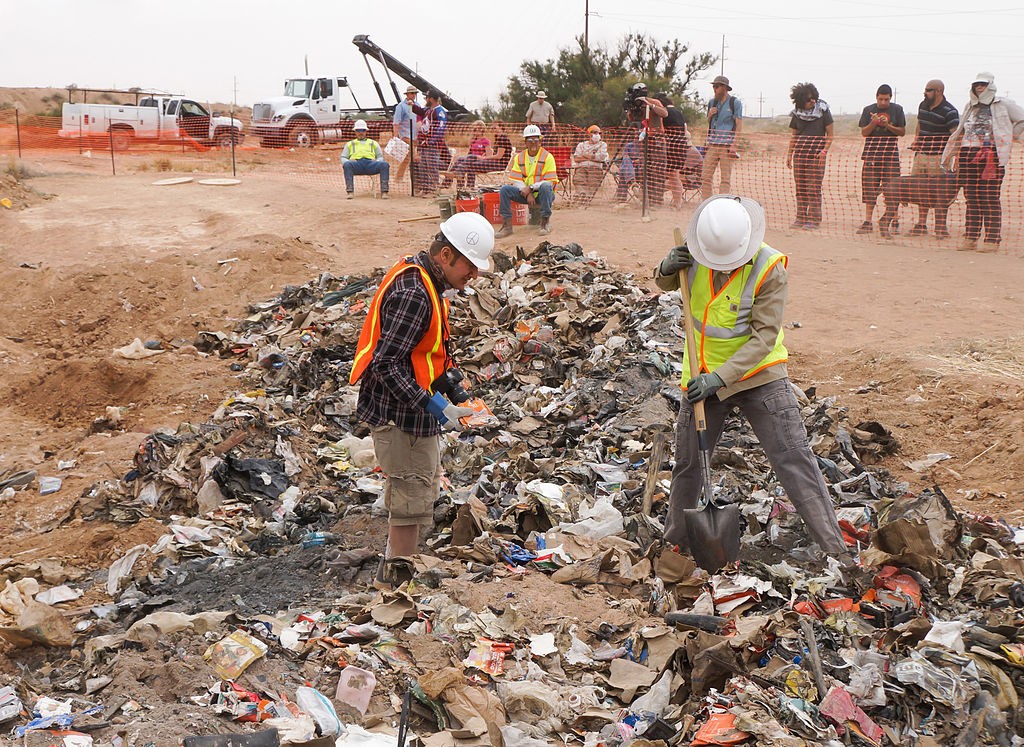 We started by discussing the great Atari video game burial of 1983 and the comparative durability of the technology used at this time in history compared to that of today. This was an important aspect of the What Remains, so we looked at how we recycled old cartridges to store new software on for that project.

The specific scenario of collapse used in this type of research is one where all electronics production has ceased, all logistic and communication channels are destroyed, damaged or restricted. This could be due to a global crash, or an area becoming cut off from the rest of the world. Each component in our devices has a lifetime, most of them less than 10 years. While its possible that we could salvage components and repair our devices, there is also the issue of the knowledge required – much of it currently restricted to specialist silos of expertise.

“Social networks or institutions of people interested in computer repair could be invaluable for sourcing parts and maintaining skills needed to keep computing alive until devices and power are no longer scarce.” 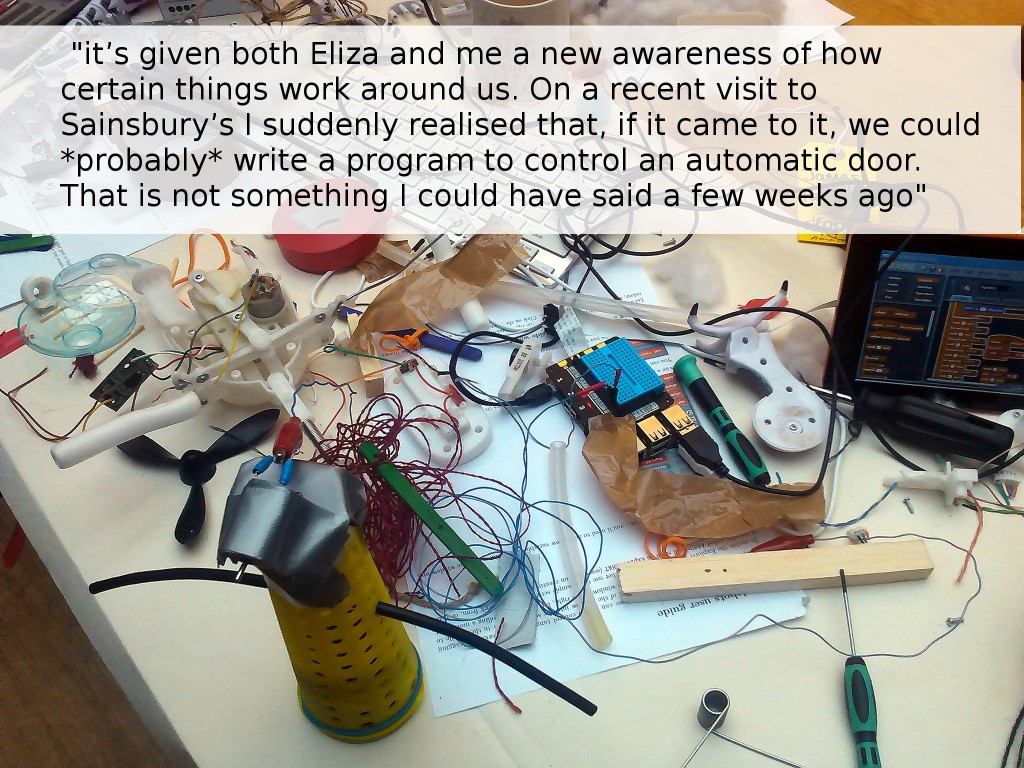 The starting point for our Tanglebots workshop for example, is an e-waste scrapheap we search through for things to take apart and reuse. Sustainability issues like this are often better presented implicitly, to set the scene – which then leads to a more interesting situation than starting with identical ‘kits’. You get to explore internal parts of cheap toys like dissecting natural organisms, and this process fits well with the haphazard reality of building technology, and working with family groups leads to knowledge sharing of the kind that would be needed to keep skills alive after collapse.

For the practical part of our seminar we wanted to focus on internet infrastructure, although originally developed to be resilient to war situations – the current scale involved, with undersea cables and centralised servers makes it one of the weakest aspects of our societies infrastructure to collapse, along with mobile technology:

“Long distance networking and information sharing becomes difficult with the decay of Internet infrastructure. Therefore, it may be crucial to establish communication channels, file sharing practices, and communities before the breakdown of mobile computing.”

Some of the problems involved include software updates – as these become more challenging users become more prone to malware and viruses as they can’t be protected as effectively by the software authors. How would we manage software distribution post-collapse?

Global data transmissions are happening all the time on short wave radio. Certain frequencies bounce from the ionosphere or micro-meteorite trails to cover the globe, and data ‘modes’ are used rather than voice as they can travel further at lower power. There is even a slow-scan TV data mode which is used by the International Space Station to transmit images to amateur radio operators around the world – and regular contacts are made with people on the ground using shortwave frequencies. 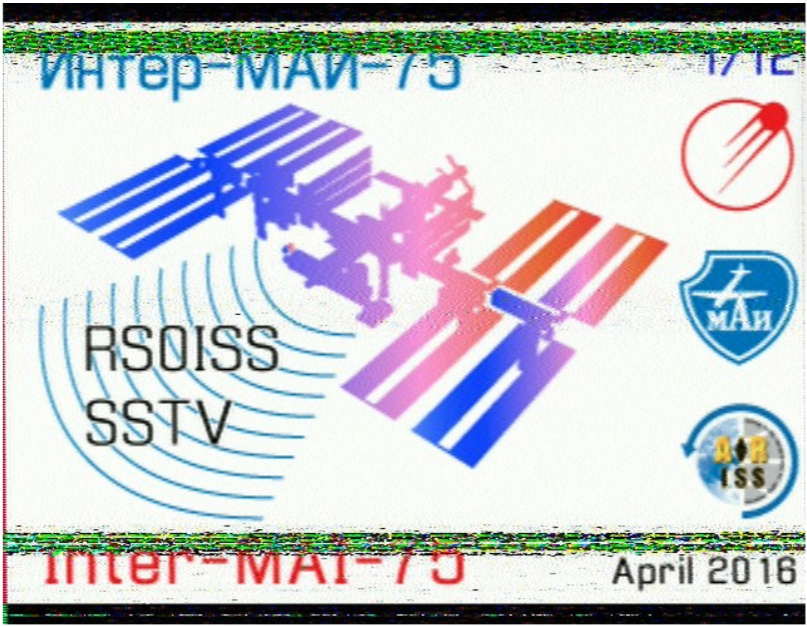 We spent the afternoon scanning the airwaves using the websdr.org network (no radio hardware required). You can choose your global location and frequency band (and by extension the time of day too – as transmissions travel further in the night time). The web interface allows you to record sound as wav files, which we analysed using Audacity.

In order to figure out what a particular transmission is, there are some clues you can use. The first is the frequency used, which you can look up via this chart as there are rules for what frequencies can be used for. We also found these example data recordings which we used to figure out the type of transmission data based on listening.

Here are some example recordings we made:

The first one was a bit of an enigma for a while – it sounds like really slow badly tuned music. We figured out it was probably an RTTY text messaging protocol called JT65 – for low power, long range short text communication:

The second one is still unknown, but there are a few clues. It’s a periodic burst of high speed data transmitted on a frequency band (6765 to 7000 kHz) that includes ‘FAX’ modes. It’s likely that this is some kind of weather map – but it doesn’t sound quite like any of the examples I’ve heard.

The third recording is a collection of simultaneous morse transmissions on similar frequencies. They all seem to be machine generated, a lot of repetition – probably some kind of beacons. I’ve tried to decipher them below but no hidden messages unfortunately!

This seminar was a good crash course for us all, and a way to get a handle on the sheer amount of activity on these not too well known global communication channels. A lot of these concepts are making their way into technology we are building, for example the penelope pattern matrix where we are using wood construction and modular circuits that we can adapt for different uses.

Future radio directions could be to set up a packet radio server to host some websites, even on a very tiny range (perhaps simply transmitted/received over audio) so we wouldn’t need a licence.